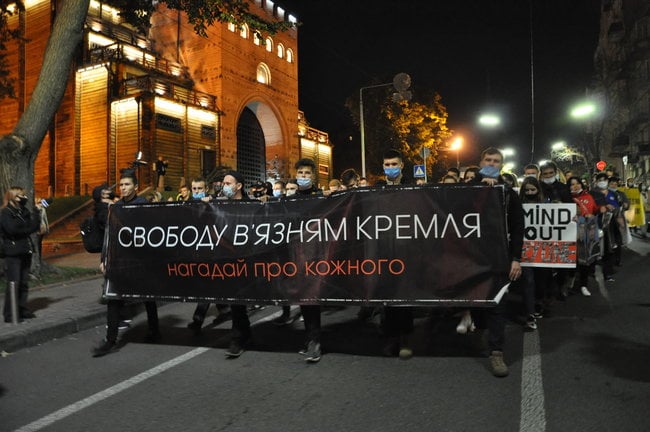 Ukraine’s Cabinet of Ministers has quietly ‘reallocated’ funding set aside for supporting the ever-mounting number of Kremlin hostages and their families.  They did so, moreover, in a resolution supposedly ‘adopted’ on a day when no meeting was held, and clearly hoped that the sleight of hand would not be noticed. The fact that there were no mechanisms for spending the money allocated can hardly be cited as an excuse when it is Ukraine’s legislators who have failed to pass the legislative initiatives that could have rectified the situation.

Yevhen Leshan from the Centre for Journalist Investigations [CJI] reported earlier in October that a Cabinet of Ministers Resolution from 5 October had redirected money allocated for Kremlin hostages to finance a newly-created state enterprise called ‘Reintegration and Renewal’.  Vigilant CJI journalists and an anti-corruption watchdog first reported the emergence of this rather strange enterprise on 23 April 2020, as well as certain details about the businessman appointed as acting director (and currently seeking permanent appointment).  They point out that Mykolayiv businessman Dmytro Lanin is registered as the director of ‘Park Hotel Saki’, in Russian-occupied Crimea, and that his income declaration indicates that this assets are 10 times higher than his income.

How Lanin came to be appointed acting director is unclear and there is no information on the website of the Ministry on the Reintegration of Temporarily Occupied Territories [hereafter the Ministry] about any competition to fill this post.

At that stage, it was known only that this new state enterprise was to be a state department of a general nature, with the special types of activities mentioned including construction work; activities linked with transport, human resources, defence activities, contacts with the public and others.

There was nothing to explain what exactly the state enterprise had been created for, and what it was to do.  There was also no information about how it was to be funded. CJI turned to the Ministry and received only the most vague waffle about the enterprise’s purpose, but also the assertion that its income was to be according to a financial plan and that it “functions on the basis of total economy autonomy and self-sufficiency”.   It was only on 3 July that the head of the Ministry, Oleksiy Reznikov informed CJI that the enterprise had been created so that one body would be in charge of all checkpoints in Donbas and on the administrative border with occupied Crimea.  Reznikov claimed that a special fund would be created which would seek international financing for creating the infrastructure in regions bordering occupied territory.  He described at length grandiose plans for attracting donor support, investment, loans, etc.

The reality, as reflected in the 5 October CM Resolution proved much more sordid, with the money for the new enterprise, headed by a person with unexplained income and business ties to occupied Crimea, being taken away from those Ukrainians who desperately need our support, namely the Kremlin’s hostages and their families.  Since there was no meeting of the Cabinet of Ministers on 5 October, and such resolutions can only be adopted at a meeting, there are also serious doubts as to the legality of the move.  CJI have sent formal requests for information to both the Cabinet of Ministers and to the Ministry for Reintegration, but as of 16 October had received no response.

As reported, the Cabinet of Ministers finally adopted a resolution in July 2018 with this allowing for money to be set aside in the state budget to provide financial assistance to political prisoners and their families, in particular for legal expenses.  Now, Resolution No. 919 from 5 October 2020 proposes to add Item 41 to the Procedure for using that funding which essentially hands the money over to the new ‘state enterprise’.   Instead of supporting the most vulnerable victims of Russia’s aggression, the money will now be used for paying salaries within this state enterprise, communal charges, etc.

Leshan points out that there are Regulations setting out strict Government requirements for any entity receiving funding from state budgetary programs.  Not one of these has been met by the new ‘Reintegration and Renewal’ state enterprise, yet the latter will receive funding without having even provided a plan of how the money will be used.

Although the funding of 126.7 million UAH allocated in 2019 for the needs of political prisoners, etc.  was reduced in 2020, CJI reports that there was still a figure of up to 90 million UAH.  Around 20 million of this was designated for measures linked with reintegration, but that left 70 million for the needs of political prisoners, including medical, psychological and social rehabilitation for those Kremlin hostages finally released, in many cases after torture and years of incarceration.

The Ministry has told CJI that 65 people (or their families) have received the single 100 thousand UAH payments envisaged by the original CM resolution.

In an interview to CJI Director Valentina Samar, Ihor Hryb, father of ex-political prisoner Pavlo Hryb and the former head of the department dealing with Kremlin hostages,  gave a blistering account of the failure by Ukraine’s legislators to adopt proper legislation.

He notes that the government gave blithe assurances back in 2018 that a law would be adopted that designated who should be considered a political prisoner; how they could be supported, etc.

As repeatedly reported here,  these proved to be empty assurances.  Hryb says that under the previous Verkhovna Rada (until the middle of 2019) there were seven draft bills tabled in parliament with none of them getting to real consideration and adoption.

Six and a half years after Russia began its aggression against Ukraine, and started taking political prisoners,  there is still no legally established status for political prisoners, nor for prisoners of war, Hryb points out that Zelensky also promised that the situation would be resolved soon after he came to power, with no resolution to this day.

Even without the adoption of a special law, Hryb says, they had tried to put as much detail as possible into the above-mentioned Regulations so that  support would encompass not only the 100 thousand UAH payments, but also measures for rehabilitation of former hostages, etc.

Hryb is scathing about the people who came to power with the change of power last year. He says that the merger of two ministries then resulted in people with no understanding of the subject coming in and cancelling all that they had taken them so long to achieve with regard to social rehabilitation of former hostages.  Then the government changed again in the Spring of this year, with a separate ministry created – on issues of reintegration of occupied territories.  This inevitably led to the loss of six months with that time needed just to bring all normative acts into line with the new name of the ministry, etc.

Of the money allocated in 2019, only the 10 million UAH that went on 100 thousand UAH payments for individual political prisoners were actually spent as intended , because there weren’t the mechanisms to spend the money on other needs.  Hryb points out that in September 2019, Russia finally released (in exchange, primarily, for MH17 suspect Vladimir Tsemakh) 11 political prisoners and 24 seamen taken prisoner of war after Russia attacked three naval boats near Crimea in November 2018.  The lack of a law establishing mechanisms, as well as the overturning of all the previous achievements of Hryb and his colleagues, meant that none of them could receive state assistance.

Over eight months have now elapsed since the new changes and creation of a new ministry, and nothing has been done to help political prisoners and released Donbas hostages.  Hryb is aware of only 14 people this year having received the 100 thousand UAH payments for legal assistance, with a further 8,3 million UAH used in one-off payments, with this out of the 66.5 million UAH allocated.  Hryb stresses that this information is informal insider knowledge since neither the Cabinet of Ministers nor the Ministry have answered their requests for information.

A law needs to be passed immediately to regulate all these issues and to ensure that state bodies create the procedure needed so that political prisoners, their families and those who have returned from captivity can receive the money allocated.

There are well over 100 Crimean Tatar and other Ukrainian political prisoners in occupied Crimea and Russia.  Around 200 children have had their fathers taken from them, with this in most cases having also been the main breadwinner of the family.  Although the situation is different in Donbas, in both cases prisoners released require extensive medical, psychological and social rehabilitation, as well as financial assistance in rebuilding their lives.  All the above have long been blocked by Ukraine’s legislators, and have now effectively been robbed by the new Cabinet of Ministers ‘resolution’.