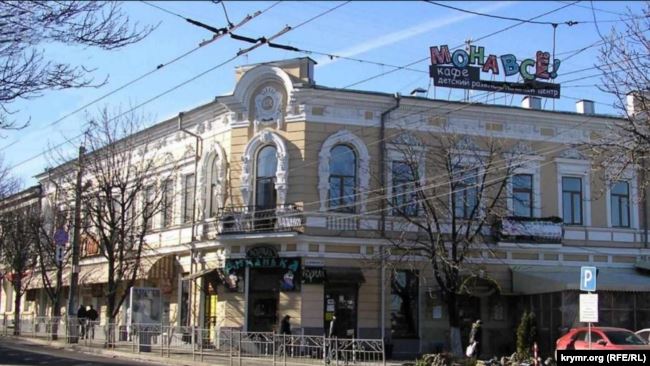 The world-famous Massandra Winery in occupied Crimea is due to be privatized and sold by the end of 2020, with this only one of many parts of Ukraine’s heritage in Crimea that the Russian occupiers are treating as bounty and selling, often to people close to the Kremlin or to the occupation regime.

Viktoria Veselova from Krym Realii reports that premises in two former merchant homes in Simferopol, both of them monuments of cultural heritage dating back to the 19th century, are due to be auctioned by the Russian-controlled Crimean authorities in October.  The main premises of the Sariban and Chirakhov homes are already occupied by commercial structures close to the occupation authorities. The documentation available shows that the ‘buyers’ tend to be influential businessmen linked with the occupation regime, such as Oleg Lukashev, whose father Igor Lukashev was, at the time of the deal, mayor of occupied Simferopol.  These businessmen often get to buy up property in exquisite buildings of historical importance for no more than the price of a recently-built apartment.

One of the premises now up for grabs is in what was once the home first of David Sariban, and later his son, Yefim.  Before Russia’s invasion and annexation, premises within the building were leased out, with a restaurant offering Ukrainian cuisine.  It is two floors of this building that Oleg Lukashov’s company ‘bought’ as the result of earlier illegal privatization in 2017.  Another beneficiary of such dodgy privatization is officially Svetlana Babiy, a long-time business partner of Sergei Aksyonov, the pro-Russian politician with a criminal background who was installed as ‘Crimean leader’ by Russian soldiers on 27 February 2014.  Unofficially, the beneficiary is, in fact, Oleg Aksyonov, the politician’s son.

On 14 October, the Russian-controlled parliament in Crimea voted to privatize the Massandra Winery. It is supposedly going to be sold at auction, although it still seems likely that it will be sold to one of the Russian oligarchs close to Russian President Vladimir Putin

Massandra dates back to Tsarist times, having been created by Prince Lev Golitsyn in 1894.  First nationalized after 1917, the winery always had some degree of state protection.  According to Mykola Boiko, who was director of Massandra for 29 years until 2015, and is now growing wine in mainland Ukraine, there were always businessmen raring to buy the winery, but until Russian occupation, no political leader was willing to agree to this.  In 2009, to ensure that the winery remained intact, Ukraine’s President Viktor Yushchenko formalized Massandra’s national status and full state ownership.

According to a blogger, writing (for safety reasons) under the pseudonym Andrei Pokrovsky, this scheme has already been deployed to get other wineries under oligarch control. This includes the renowned ‘Novy Svet’ Winery, also dating back to Tsarist times, which was sold in December 2017 to a St. Petersburg company ‘Southern Project’, part of the bank ‘Rossiya’, for 1.5 billion roubles .  This price, Pokrovsky is convinced, was far too low, however he suggests that lucrative prices are only part of the attraction, and that the Russian oligarchs want the prestige and the aristocratic chic ‘owning’ such wineries gives them.

It remains to be seen what the official price at the auction proves to be, however Massandra was recently estimated at ‘worth’ 627 million roubles (9 million USD).  This price was dismissed by Boiko as ridiculously low for the four thousand hectares of vineyards and wine cellars.  He points out that the vineyards alone were valued at 6.4 billion euros in the first decade of this century.

There is essentially no price possible for a unique winery which is a site of Ukrainian and of world heritage. Until Russia’s invasion and the sanctions imposed by both the EU and the USA, Massandra wines were sold at Sotheby’s, and had won around 250 gold medals.