Belarusian Journalists Handed "Absurd" Prison Sentences For Live Coverage Of Anti-Government RallyMore Than 1,000 Detained In Belarus As Protesters Face Tear Gas, Stun Grenades, BeatingsBelarus: Savage attack and possible 3-year sentences against journalists reporting March against TerrorBelarusian Police Detain More Than 90 As Protests Enter 11th WeekBelarus threatens to use lethal force against protesters as pensioners march for freedomHow post-election protests are creating a new Belarus’We’re Belarusians, Not A Russian Region’: Protests Take Aim At KremlinLukashenka returns Donbas mercenaries to Russia, others, reportedly, on their way to BelarusBelarusian museum director who refused to sign false election protocol found deadLukashenko regime’s savagery may be backfiring in BelarusBelarus initiates ‘mass riot’ criminal charges against detained Ukrainian rights activistsBelarusian Opposition Presents Broadest Challenge Yet To Strongman Lukashenka After Disputed ElectionBelarus: ‘I appeal to all Europe: Please help us, because they’re killing my family’Belarus: Peaceful protester killed in violent crackdown after claimed Lukashenko victoryWhy were Wagner fighters from Russia seized in Belarus and can Ukraine get them extradited?State Media Vs. The Streets: How Lukashenka Lost The Media War In BelarusTop Lukashenka Challenger Babaryka Barred From Belarus’s Presidential ElectionBelarusian Vlogger Gets Another 15 Days In Jail As He Awaits Criminal ChargesAI condemns purge on bloggers & activists ahead of presidential elections in BelarusUkraine’s Security Service abducts and deports former political prisoner to Belarus
• Topics / News from the CIS countries 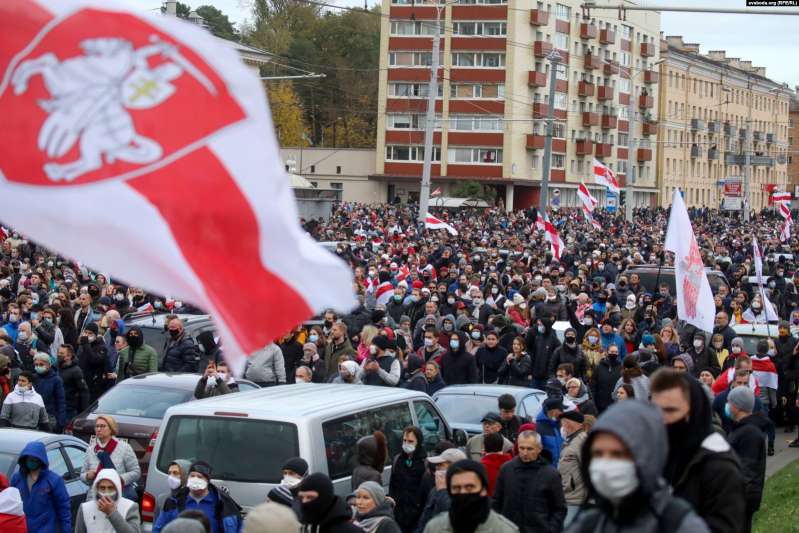 MINSK -- Belarusian police detained more than 90 people during the latest rally to demand that authoritarian ruler Alyaksandr Lukashenka step down as a political standoff enters its 11th week.

At least 77 people were arrested in the capital, Minsk, during the rally on October 18, the Vyasna rights group reported. The rest were detained in regional cities, the group said.

Thousands of citizens peacefully marched through the center of Minsk on a cool, overcast day carrying the banned red-and-white flag of the opposition.

“Look out the window. Stop watching TV,” the protesters chanted, a reference to state-controlled media downplaying the size and peaceful nature of the rallies.  The protesters also called for Lukashenka’s arrest.

“Lukashenka in a paddy wagon!” they shouted.

The authorities deployed armored vehicles and water cannons in Minsk and blocked roads.

The October 18 rally attracted a smaller crowd than in previous weeks.

In the days leading up to the rally, Belarus’s First Deputy Interior Minister Gennady Kazakevich threatened to use “lethal weapons if need be” on protesters to break up the demonstrations, which the authorities have called illegal.

His statement was the first time Belarusian authorities have explicitly threatened to use firearms against opposition demonstrators. He did not carry out his threat.

Belarus has been rocked by protests since Lukashenka, in power since 1994, was declared the winner of the country’s August 9 election amid allegations of widespread vote-rigging.

The protesters are calling for Lukashenka to step down and for new elections to be held.

Lukashenka sought to immediately squash the protest movement as he had in the past with harassments, arrests, and police brutality.

More than 12,000 Belarusians have been detained and hundreds tortured during protests over the ensuing weeks.

His top rival, Svyatlana Tsikhanouskaya, was forced to flee to Lithuania amid threats to her and her family. Supporters and others say she was the real winner of the August 9 vote.

However, the authorities have been unable to stamp out the movement and a stalemate has ensued.

The EU and United States have refused to recognize Lukashenka, who held an abrupt inauguration ceremony last month, as the legitimate ruler of Belarus.

Tsikhanouskaya and her supporters have stepped up their pressure this week as she called on Lukashenka to step down by October 25 or face a nationwide strike.

Lukashenka has lost the support of many state workers, long considered his base, as the economy has struggled under his rule in recent years.

Hundreds of people have been detained by police in Belarus since postelection protests swept the country -- and lawyers now find themselves on the defensive.

Attorneys who have been hired or have volunteered to defend detainees and opposition leaders struggle not only to handle huge caseloads, but also the formidable hurdles they say authorities are placing in their way.

"You no longer need to just shout, ’Long live Belarus!’ or raise your hands," Dzimtry Laeuski, a Belarusian lawyer who has defended detainees, says of the current situation. "Now, just for walking and not shouting anything, you can be detained."

The lawyers themselves find themselves circumventing obstacles -- such as scrambling to get to court after being given only a moment’s notice that their client’s case is being heard -- and working under the threat that they, too, may run into trouble with the authorities.

Lawyers say they face disbarment, detention, or even arrest for their work with the opposition.

In the latest such case, Alyaksandr Pylchenka, a member of the Minsk City Bar Association for 30 years, was denied his license to practice law, the Belarusian Justice Ministry announced on October 15.

Pylchenka has worked for Viktar Babaryka, a former bank manager whose bid to run for president was derailed when he and his son were arrested on embezzlement charges that supporters say were trumped up. Pylchenka also defended Maryya Kalesnikava, a former campaign manager for Babaryka and aide to Svyatlana Tsikhanouskaya, the opposition leader who supporters say actually won the August 9 election. Tsikhanouskaya left Belarus for Lithuania shortly after the election amid threats to her and her family.

The Justice Ministry faulted Pylchenka for an August 14 interview with the independent Belarusian news website Tut.by in which he called on the country’s prosecutor-general to take legal action against those implicated in the beating and other abuse of detained demonstrators in the first three days following the election, when the government’s crackdown was especially brutal.

"In the interview, I expressed my opinion about what the prosecutor-general should do under certain circumstances, what measures to take -- initiate criminal cases and make dismissals," Pylchenka told Current Time, the Russian-language network led by RFE/RL in cooperation with VOA.

Also disbarred on October 15 was Yulia Levanchuk, who was defending Maksim Kharoshyn, the owner of a shop in Minsk who handed out flowers to protesters. Kharoshyn was beaten so severely in detention that he was barely able to walk and left a police station in an ambulance on October 13.

Levanchuk told Tut.by that the relevant Justice Ministry commission had faulted her for failing to hand over some personal communications, although details were unclear.

Other lawyers have faced even harsher fates.

Lyudmila Kazak has defended Kalesnikava, a key member of a body Belarus’s political opposition set up to facilitate a transfer of power in Belarus. The Coordination Council has been targeted by Lukashenka, with key members either arrested or forced to flee the country. Kalesnikava herself is facing charges of undermining state security and could be sentenced to up to five years in prison if convicted.

Kazak vanished on September 24. It later emerged she had been grabbed off the streets in Minsk by unidentified individuals, bundled into a car, and taken to a police detention center on Akrestsina Street, dubbed the "torture chamber" by rights defenders for the abuse detainees suffered there.

Kazak said she was charged with "failing to obey" police at an opposition rally in Minsk on August 30 that she said she didn’t even attend.

The next day, two police officers, their faces veiled behind balaclavas, testified against Kazak in court. She was found guilty and fined the equivalent of $260.

Kazak is convinced she was targeted for defending Kalesnikava, who languishes in a Belarusian prison after security officials failed to deport her to Ukraine last month after she tore up her passport at a border checkpoint.

"We lawyers are outraged by all this, and no one feels safe given what is going on. Of course, lawyers have the means and methods to fight and defend their rights," Kazak told Current Time.

Kazak is not the only high-profile lawyer observers say was targeted by Lukashenka’s regime.

Maksim Znak and Ilya Saley were arrested on September 9 after law enforcement searched their Minsk apartments.

Znak was a lawyer for Babaryka and Tsikhanouskaya, and a member of the presidium of the Coordination Council. He is credited with coining the term "legal default" for the state of justice in Belarus today.

On August 21, Znak filed a complaint with the Belarusian Supreme Court calling for the election results to be ruled invalid amid widespread allegations that the vote count was fraudulent.

What exact actions Znak and Saley are alleged to have taken to threaten national security are unknown, explained Znak’s lawyer, Dzmitry Laeuski.

"Maksim addressed topics like a referendum, the recall of parliament deputies, and other issues that resonate. But he never said anything that could be construed as illegal," Laeuski explained to Current Time.

"The idea of recalling deputies is new. And other things he brought up hadn’t been raised before. Belarusians weren’t used to hearing them. But given the current situation, which has been dragging on for four months, maybe such ideas were inconvenient to some," the lawyer added.

Like many in Belarus, the U.K.-based Law Society charged that the detention of the two opposition lawyers was "directly related to their professional activities and constitutes improper interference with such activities."

Znak held a hunger strike for 10 days during his current detention to draw attention to his plight and that of others in jail.

"For the first time in the history of modern Belarus, a lawyer went on a hunger strike while in custody," Laeuski said. "This is unprecedented and proportional to the unprecedented situation where legal norms are not upheld."

The lack of legal norms makes the everyday work of lawyers in Belarus today anything but simple.

"In the evening, the parents or friends of the person detained call me and tell me the person has been taken in. That means that the next day I not only search for the person, but where the case will be handled," he explained.

As an example, Zikratski said that the court may call at 11 in the morning, an hour before a client’s trial is to begin.

"This means that I have to drop everything and get to the court in 15, sometimes 30 minutes, by car. I get there and quickly have to familiarize myself with the case materials, finding out what exactly my client has been charged with," the lawyer explained. "Adding to the absurdity is that my client can be detained at one place, but the case file indicated somewhere completely different."

Kazak said that, ultimately, it is the authorities’ decision when and if information on detainees is released.

"Whether you are a lawyer or an ordinary person, if they ’need to work’ on you, then no one will find you, no information about you will be released, no lawyer will be allowed to visit you, until they consider it necessary," Kazak said.

Judicial transformation across the former Soviet Union has been a struggle, but Belarus’s persecution of lawyers is specific, explained Pavel Chikov, head of the Russia-based rights group Agora.

"The main target of the criminal cases launched in Belarus now against lawyers are the leaders of the political opposition and Lukashenka’s former opponents in the presidential election. These are Babaryka, Tsikhanouskaya, and Kalesnikava," Chikov said.

Lukashenka is targeting lawyers much as his regime did in the aftermath of the country’s 2010 presidential election, which also ended in protests, albeit much smaller, that were repressed brutally, triggering Western sanctions on Belarus.

"Pressure was then also exerted on [opposition] lawyers. They had their law licenses revoked; they were forced to leave the country," said Chikov.

Like all opponents of Lukashenka in Belarus, the fate of lawyers facing persecution will be determined by the outcome of the current political turmoil, Chikov said.

"It’s clear that if the protest movement is successful, then the charges they face will end along with the Lukashenka regime," Chikov said. "But if Lukashenka remains in power, then everything will be determined by some later events, by the courts -- prison terms and all that.

"For now, they have to defend themselves and hope for political change."