Crimean activist sentenced for “Down with the Putin police regime!” & social media posts 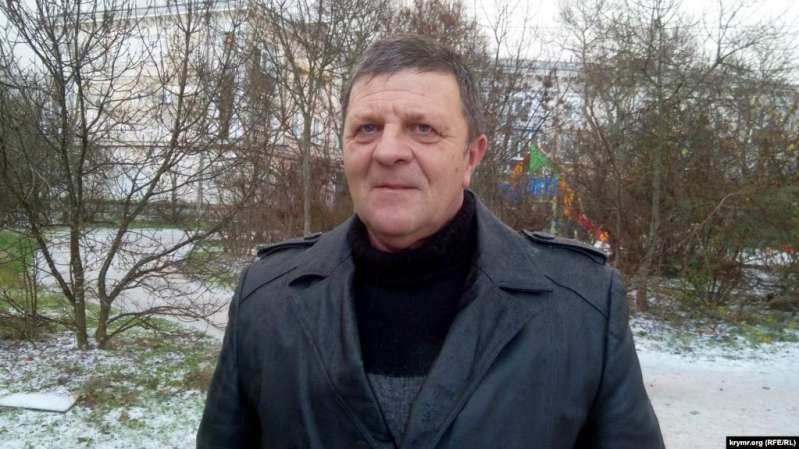 Valery Bolshakov, a left-wing activist from Russian-occupied Sevastopol, has received a two and a half year suspended sentence, with a two-year trial period, for a picket and speech under the slogan ‘Down with the Putin police regime!’ in which he called for “the dictatorship of the proletariat”  This, as well as four social media posts, were accepted by the Russian-controlled Nazhimovsky District Court as public calls to ‘extremism’.  The ’court’ thus passed exactly the same sentence as that handed down by another judge from that same court in June 2019, but then overturned at appeal stage on 10 March this year by the Sevastopol City Court.

The defence has already said that they will be challenging the ruling, with lawyer Sergei Legostov stating that after the appeal at the Sevastopol City Court, other lawyers will decide whether to seek justice at the European Court of Human Rights.  Legostov was scathing about the charges, pointing out that most involved Bolshakov’s comments on VKontakte from 2015 to 2017.  Had these genuinely been seen as violating the law, why had no attempts been made to stop them?  Instead, the enforcement bodies simply observed and recorded them, in order to then prosecute Bolshakov.  The latter believes he has been persecuted for his civic activism.

Both in the first trial,  and in this one, that began on 2 July 2020, Bolshakov was charged over four posts on VKontakte which the Russian-controlled prosecution claimed “called to a violent change of power in Russia” and for the overthrowing of the regime of Russian President Vladimir Putin.  Bolshakov was also claimed to have sought the establishment of the so-called dictatorship of the proletariat by violent means.

Such is the nature of political trials under Russian occupation that it was the result of the appeal hearing on 10 March 2020, rather than the guilty verdict on 10 June 2019, that was seen as a surprise.  Legostov’s colleague, Alexei Ladin, certainly did not disagree that the charges against Bolshakov were blurred and unclear.  His surprise was that the Sevastopol City Court decided, on those grounds, to send the case back to the prosecutor “for clarification”.  Ladin explained at the time that such generalized formulations are standard for political trials, making it easy for the prosecution to freely interpret the texts and higher for the defence to effectively counter this.  Ladin pointed to the absolutely standard formulations in all prosecutions of Crimean Tatars and other Ukrainian Muslims on fabricated charges of involvement in the peaceful Hizb ut-Tahrir, which is legal in Ukraine.  The indictments abound with phrases about alleged behaviour “by unidentified individuals” “in an unidentified manner” “at an unidentified time”.

The initial charges laid against Bolshakov back in November 2017 were of ‘incitement to enmity’ with the alleged target of this enmity being Terek Cossacks.  That charge, under Article 282 § 1  of Russia’s criminal code, was withdrawn at the beginning of 2019 after a very modest improvement in an article widely abused to persecute people for social media reposts or posts.  The first prosecution of supposed incitement is now under administrative legislation.

Such an easing was largely symbolic as Bolshakov was simply charged, in connection with the same social media posts under Article 280 §§ 1 and 2 with alleged calls to commit ‘extremist activities’, and the more serious charge of the same calls with the use of the mass media.

An ‘expert assessment’ of Bolshakov’s banner at a picket reading “Down with Putin’s police regime” claimed that this contained “a call to remove the official authorities”.  The speech he made at the time, calling for ‘the dictatorship of the proletariat”, was claimed to contain calls to achieve this by violent means.

It seems much more likely that the speech led to Bolshakov’s prosecution because of its highly negative words about Putin, such as calling him a scumbag and traitor.

Like a huge number of other victims of persecution, Bolshakov was placed on Russia’s notorious List of Terrorists and Extremists back in November 2017, and remains there to this day.  Inclusion in the list causes enormous difficulties, limiting financial transactions , etc.