Russia uses torture by Donbas militants to fabricate a new Ukrainian ‘spying trial’Donetsk militants and Russian FSB collaborate in torture and abduction of Ukrainian political prisonerRussia sentences Ukrainian political prisoner to 10 years after abducting him from DonbasRussia’s ‘all for all’ exchange: those who were not returned to UkrainePoroshenko honours judge who effectively sentenced renowned Ukrainian dissident to deathRussian LGBT activist charged with calls to violence against fascists and terroristsIn Memoriam: Nina MarchenkoStrasbourg rules in favour of Ukrainian teacherMoral Choice
• Topics / The right to liberty and security 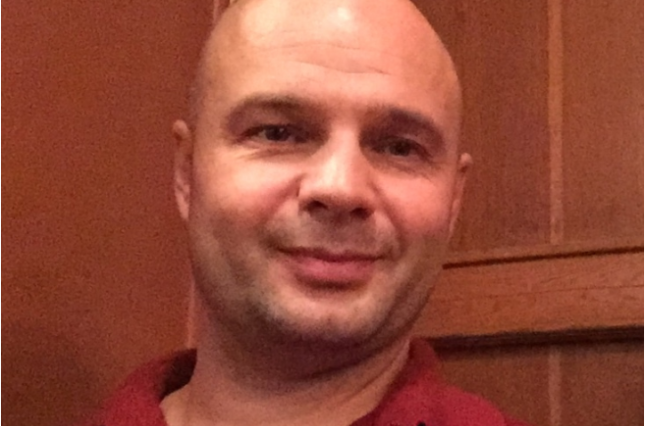 Russia’s ‘trial’ of Oleksandr Marchenko took an unexpected turn in October, after the Ukrainian political prisoner stood up in court and described the torture he had been subjected to by Russian-controlled Donbas militants before being abducted to Russia.  It seems unlikely that the court was genuinely unaware of this, but since the charges against Marchenko are based solely on the ‘confession’ he says was forced out of him,  the court ordered a ‘check’ to be made with the trial adjourned until 26 November.

Marchenko’s wife,  Kateryna, explained to the Memorial Human Rights Centre that the court questioning of Marchenko took place on 8 October, with the verdict / sentence scheduled for the following day.

Marchenko explained that he had been seized in the self-proclaimed ‘Donetsk people’s republic’ [DPR] and tortured, before being taken by FSB officers and DPR militants to Krasnodar in Russia.  This had been without any explanation or formal accusations, and, clearly, against his will.  According to his wife, Marchenko described being taken to an illegal interrogation on 23 February 2019, while under arrest on fabricated administrative charges.  It was the protocol from that interrogation, which was carried out without a lawyer being present, that have been used for criminal charges against Marchenko.  He explained to the court that the FSB had threatened to take him, as well as members of his family, back to ‘DPR’, where he had been savagely tortured.

Marchenko also told the court that he had addressed a complaint over this to Russia’s Investigative Committee, to the Russian Human Rights Ombudsperson and to the Russian prosecutor’s office.  He had been assured that a check had been carried out, but that “it had not found any violations”.  There are, unfortunately, few grounds for optimism about ‘the additional check’ ordered by the court, to be carried out before the next hearing on 26 November.

There are, on the other hand, very strong grounds for concern about the 49-year-old Ukrainian’s state of health.  The conditions in any Russian SIZO [remand prison] are appalling and Marchenko also requires, and is not receiving, regular monitoring of his thyroid hormones following removal of his thyroid due to cancer.   He needs medication to reduce the risk that the cancer will return.

As reported, Marchenko and his family were forced to leave their home in Donetsk back in 2014.  They left in haste, and could not collect the car which Marchenko had left for its regular servicing.  They were later informed that one of the so-called ‘DPR ministers’ had been seen driving around in the car.

In December 2018, a person they knew from Donetsk phoned them and said that the man who had appropriated their car had fled from the city.  They were in a difficult financial position so, on 15 December 2018, Marchenko set off for Donetsk to try to retrieve the car.

Since he wanted to retrieve the car and bring it back with him, Marchenko took the fatal decision to travel to occupied Donetsk via Russia.  He flew to Minsk, then Moscow, and then to Rostov-on-Don, from where he crossed into occupied territory through the Russian and militant-controlled border.

The FSB are now claiming that Marchenko was in conspiracy with another person – seemingly a Russian citizen, identified only as Y. Fedorenko.  The charges against Marchenko – of having planned to smuggle military technology - appear to be based solely on Fedorenko’s testimony.  Memorial HRC has pointed out that it is a standard ploy to extract such testimony under threat that the person (in this case Fedorenko) will himself be imprisoned on such charges

Having studied the material regarding the period since Marchenko was brought to Russia, Memorial HRC has concluded that both administrative and criminal charges are politically motivated and that he is, therefore, a political prisoner.  Marchenko is one of at least three Ukrainians who have been seized by Donbas militants and then abducted, by the militants and Russian FSB, to Russia.