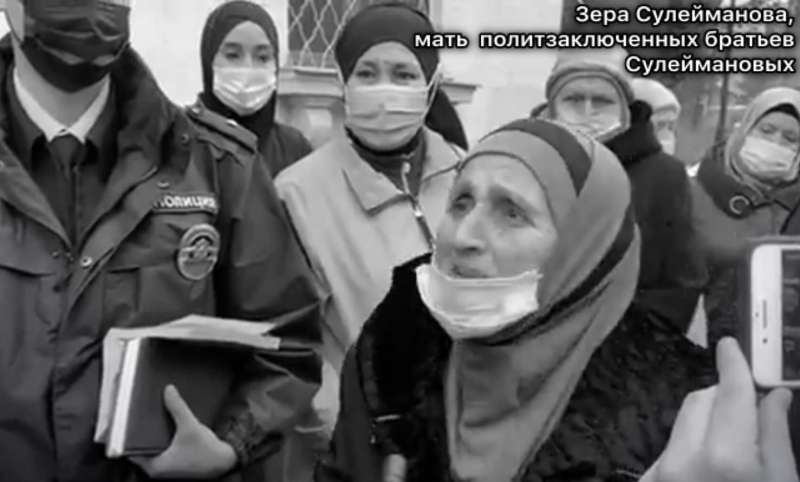 Sergei Aksyonov, Russian-controlled Crimean leader, has praised the FSB and other enforcement officers who illegally detained around 200 Crimean Tatars during the night from 2 to 3 November. In a chilling Facebook post, he has confirmed that the operation on Monday evening was aimed at intimidation, and effectively threatened to treat acts of solidarity with Crimean Tatar political prisoners as ‘abetting terrorism’.

Aksyonov first commented on the sentencing of three Crimean Tatars who have been recognized as political prisoners by the authoritative Memorial Human Rights Centre, and whose release has been demanded in UN and other resolutions.  Rustem Emiruseinov was sentenced by a Russian court to 17 years’ imprisonment; Arsen Abkhairov and Eskender Abdulganiev – to 13 and 12 years’, respectively, without being accused of any actual crime.  Aksyonov, however, called them “members of a Crimean cell of the international terrorist organization Hizb ut-Tahrir, whose activities are banned in Russia.”   Hizb ut-Tahrir is legal in Ukraine and most countries and is not known to have carried out acts of terror or violence anywhere in the world. Russia’s decision to label it terrorist was taken in secret in 2003, and has never been adequately explained, and it is one of only two countries (together with the notoriously repressive Uzbekistan) that calls Hizb ut-Tahrir terrorist.

All such details, as well as the men’s gravely flawed trial, are, predictably, ignored by Aksyonov.  The latter, however, goes a step further in addressing the FSB operation against 200 men and women, some of them elderly, who were detained on 2 November as they tried to cross Russia’s illegal Crimea bridge in order to reach Rostov in time for the men’s sentencing.  Their documents were taken away, and they were effectively imprisoned overnight, with the bridge itself being closed. Aksyonov notes that the Crimean Tatars themselves said that they wanted “to support the prisoners” and then writes the following:

“I would note that the very fact of affiliation to Hizb ut-Tahrir, whose aim is to create a worldwide Kalifate, is already a violation of Russian legislation.  As is support for terrorism. I am convinced that our enforcement officers will investigate the situation and reach the necessary decisions within the framework of the law.”  He later thanks the FSB, police, Russian National Guard, etc for “defending Crimeans from existing threats”.

In short, show solidarity with relatives, friends, or simply fellow Crimean Tatars whose persecution has been internationally condemned, and you too could face harassment and even end up facing a long prison sentence for supposedly ‘supporting terrorism’.

This is not the first time that we see such comments from Aksyonov, who was a fairly obscure pro-Russian politician with a criminal background when Russian soldiers without insignia installed him as ‘Crimean prime minister’ on 27 February 2014.   In July 2020, he thanked the FSB for a shocking operation in which several men were arrested, including Alexander Sizikov, who is blind and disabled.

Both on 5 July and 6 November, Aksyonov hid from the elderly parents of innocent men whom he had labelled ‘terrorists’.  Crimean Solidarity reports that around one hundred Crimean Tatars gathered on Friday, 6 November, outside the Crimean Cabinet of Ministers building.  Relatives of political prisoners were joined by members of the Crimean Tatar national movement and other respected figures in demanding that Aksyonov come out and explain his words.  Only a small number would be allowed into the building, a spokesperson says, and threatened those present when this was refused with consequences for holding ‘a rally’. Police buses were positioned close to where the Crimean Tatars were standing, for further intimidation.

If the first four Crimean Tatars from Sevastopol arrested on unproven charges of involvement in Hizb ut-Tahrir in January and April 2015 were essentially persecuted for their faith, later arrests have targeted civic and human rights activists and civic journalists.  After Russia’s mass arrests of 24 Crimean Tatar civic journalists and activists on 27 March 2019 provoked international condemnation, the Russian FSB slightly modified their approach.  While there was no let-up in repression, the later ‘operations’ were more dispersed, even geographically, making it harder to keep up with the ongoing arrests and subsequent ‘trials’.  All such ‘trials’ are resulting in horrific sentences of up to 19.5 years’ imprisonment in a maximum security prison.  Not only have the men not been accused of any recognized ‘crime’, but the alleged ‘evidence’ of involvement in Hizb ut-Tahrir is based on planted literature; highly dubious ‘secret witnesses’ and FSB-loyal ‘experts’.