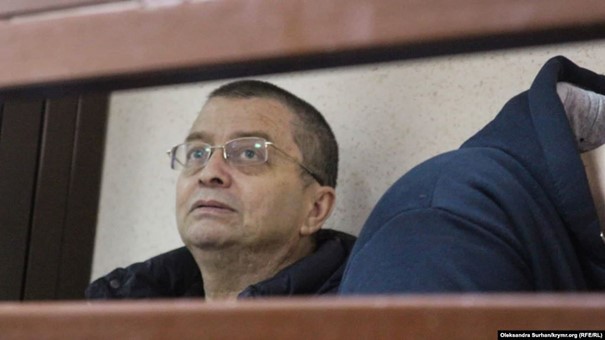 A court in Russian-occupied Simferopol has ordered the head of the prison medical unit to provide information about medical care (if any) given to Dzhemil Gafarov, a political prisoner with a life-threatening medical condition.  Even according to Russian legislation, 58-year-old Gafarov is much too ill to be held in detention, yet he remains imprisoned, with his lawyer constantly ignored or given evidently false information about Gafarov’s condition.

Lawyer Rifat Yakhin’s application to the Zheleznodorozhny District Court was only partially allowed on 9 November, with the judge refusing to declare unlawful the failure by the prosecutor to react to the situation.

As Yakhin explained to Crimean Solidarity, this was a law suit filed on principle after the prison service had, yet again, sent him empty assurances that all was well and Gafarov provided with everything he needs.  In fact, the only medication that the 58-year-old receives is obtained by his family, and not even all of these medicines are passed on to him.  Yakhin says that he is curious what they will find to write in their report about medical care that his client is not actually receiving, and the vital tests needed for a person with his severe kidney disease, yet not provided.

Gafarov is one of the oldest of the 25 Crimean Tatar civic activists and journalists whose arrests in Russian-occupied Crimea on 27 March 2019 (or shortly afterwards) aroused international condemnation. There were protests from, among others, the US State Department, Human Rights Watch, Freedom House and Civil Rights Defenders and all the men were almost immediately recognized as political prisoners by the Memorial Human Rights Centre.

In Gafarov’s case, there is immediate concern for his very life as he suffers from fourth stage kidney disease which is only a step away from the fifth, namely kidney failure. His wife explains that he is effectively in a constant state of blood poisoning, with the level of filtration of the kidneys between a quarter and a third of what it should be. It was because of this condition that, in 2017, he suffered a serious heart attack,

While Russia is undoubtedly in breach of international law through its persecution of all the men, and its illegal use of Russian law on occupied territory, it is also breaching its own law with respect to Gafarov. Even Russian law accepts that people with such serious illnesses should not be placed in detention and should be released, if such conditions develop. A petition, initiated by Olga Mazurov, a Russian doctor and civic activist, specifically demands that Russia comply with its own regulations and release Gafarov.

The petition proposes that Gafarov be examined by independent doctors.  He should be immediately hospitalized for an independent medical examination which will correctly identify the treatment he needs and the conditions for receiving it.

It is very important that Moscow sees that Gafarov’s condition is eliciting concern, and please do sign the petition here.

It is not clear whether the reason for such appalling intransigence in Gafarov’s case is that, having arrested him, nobody has the courage to take a decision that might annoy the Russian FSB.  Or whether the arrests on 27 March 2019 were such a demonstrative attack on Crimean Tatars with a civic position that there are no limits to the FSB’s brutality.

Since Gafarov’s arrest, his lawyer and family have needed to battle in the courts even for Gafarov’s obvious right and need to receive a proper medical examination. This, unfortunately, needs to be by independent doctors as two hard-won medial assessments claimed, as was demanded of them, that there was no reason for Gafarov to not be held in detention. During at least one of these ‘examinations’, he was chained to a bed and surrounded by armed men.   These measures could only be justified if Gafarov was accused of grave crimes of violence.  In fact, neither he, nor any of the other men, are accused of any internationally recognized crime at all.

All the men are accused of ‘involvement’ in Hizb ut-Tahrir, an international Muslim movement which is legal in Ukraine and which is not known to have ever committed any acts of terrorism.  The secretive Russian Supreme Court ruling in 2003 that declared Hizb ut-Tahrir ‘terrorist’ is believed to have been a pretext enabling Russia to forcibly return Uzbek asylum seekers to Uzbekistan where they were facing religious persecution.

With respect to the arrests on 27 March 2019, Memorial HRC wrote:  “This time repression is directed not merely against peaceful Muslims, not simply against Crimean Tatars, but against peaceful civic resistance to the Kremlin’s political repression in Crimea. People who have provided victims with information support, who organized parcels to prisoners and help for their families, and regularly attended politically motivated court hearings, have now ended up behind bars. Most of the arrested men are connected with the human rights movement Crimean Solidarity which supports victims of persecution.  It is extremely likely that in this situation, the convenient and already standard charge of involvement in Hizb ut-Tahrir is purely a pretext and means for crushing Crimean Tatars’ civic solidarity and activism.”

Please sign and circulate the petition and, if possible, contact politicians, media and / or human rights organizations in your country, asking them to take up Gafarov’s case.