Kyiv court orders witness to retract ‘defamatory’ testimony given in Yanukovych trialRussia brings out Yanukovych to push the Kremlin line on Ukraine’s electionsJudge heavily implicated in persecuting Maidan activists chosen for trial of ex-President YanukovychReal danger that Yanukovych would win against Ukraine in European Court over trial for Maidan killingsParliament pass law that could help Yanukovych avoid justice while hurting UkrainiansNot the Right Way to Bring Yanukovych to TrialNew Laws in Ukraine Obstruct Prosecution for Crimes against Maidan ActivistsHalf the Berkut officers deployed against EuroMaidan activists remain police officersYanukovych ‘doesn’t remember’ the bloodiest day of Maidan killingsPolitical PR & sabotage instead of real investigation on eve of 2nd Maidan anniversaryUkraine’s only trial over Maidan killings under threatPolice & judges accused of impeding prosecution of crimes against Euromaidan activistsAnother person charged with Euromaidan crimes allowed to escape?Ex-Security Service chief in custody over Euromaidan killingsSo who doesn’t want justice for Euromaidan victims?High-ranking Berkut officer charged over Euromaidan killingsEuromaidan: A Year of Impunity and what went wrongEx-Berkut officer on trial over AutoMaidan ambushEx-Berkut officers arrested on suspicion of involvement in Maidan killingsWhere are 13 mysterious Berkut sniper suspects?
• Topics / The right to a fair trial 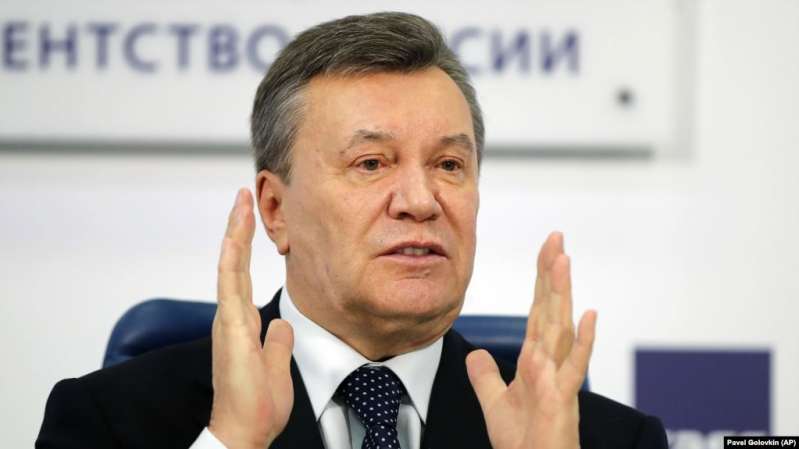 The Kyiv Court of Appeal has revoked an arrest warrant against former Ukrainian President Viktor Yanukovych over charges linked with the gunning down of peaceful protesters on Maidan in February 2014.  Given the 13-year sentence already facing Yanukovych in Ukraine and the fact that the fugitive ex-President is in hiding in Russia, the arrest warrant may seem rather theoretical, but the ruling is, nonetheless, disturbing.

The hearing on 16 November was into an appeal lodged by Yanukovych’s lawyers against the 12 May ruling from the Pechersky District Court in Kyiv which, at the prosecutor’s application, issued an arrest warrant against Yanukovych.  The original ruling has now been revoked by judges Tetyana Frych; Olha Yurdyha and Yury Slyva who sent it back to the first instance court for new consideration.  This was only partial success for Yanukovych’s lawyers who had asked that the court refuse to order their client’s arrest.   Although there was outrage on social media after the ruling was reported, prosecutor Denys Ivanov is assuming that the ruling was revoked due to some procedural infringement, and is waiting to study the full ruling.   He points out that the court on 16 November did not consider whether the charges against Yanukovych warranted his being declared on the international wanted list or other normal questions when deciding on a preventive measure.

Ihor Fedorenko, one of Yanukovych’s lawyers, confirmed to Hromadske that the ruling was in part due to  “numerous procedural infringements”, but also asserted that it had been prompted by “the failure to prove the charges”.  The latter claim is rejected by Ivanov, and would also not explain why the court sent the case back for new examination.

Volodymyr Holodnyuk, whose 19-year-old son, Ustim, was gunned down on 20 February 2014, was appalled by the ruling which he believes negates the values of the Revolution of Dignity and the deaths of those lads who have died at the front.

The Advocacy Advisory Panel stresses that the Court of Appeal’s ruling does not cancel the fact that Yanukovych is on the wanted list. According to Ukraine’s Criminal Procedure Code, it is the investigator or prosecutor that declares a person wanted.  In this case, Yanukovych was declared on the wanted list back on 26 February 2014 and the court ruling on 16 November does not change that.  They quote Ivanov as saying that “We will continue to affirm our position that Yanukovych has been placed on the international wanted list and demand that an arrest warrant in absentia be issued.”

The arrest warrant in connection with charges over the gunning down of protesters was the second against Yanukovych.  On 4 May, the same Pechersky District Court agreed to the prosecutor’s request for an arrest warrant over Yanukovych’s prosecution for alleged usurping of power. The defence’s appeal against that ruling is due on 17 November, by the same Kyiv Court of Appeal, although under different judges.

With respect to the usurping of power charges, the prosecution asserts that Yanukovych used unlawful pressure on the Constitutional Court which, in 2010, issued a critical ruling finding the 2004 constitutional reforms to have been unconstitutional.  The 2004 changes reduced the powers of the President and made Ukraine’s system that of a parliamentary-presidential republic.

One trial in absentia has already taken place of the ex-President in hiding.  On 24 January 2019 the Obolon District Court in Kyiv found Yanukovych guilty of treason, as well as of having helped Russia plan and carry out its aggression against Ukraine, and sentenced him to 13 years’ imprisonment.  The court, however, rejected the charge of having collaborated in an attempt on Ukraine’s territorial integrity and inviolability.  The sentence has not yet come into force as Yanukovych’s lawyers have lodged multiple appeals.

While the motives for the Court of Appeal’s ruling on 16 November are still unclear, there have long been concerns that convictions of Yanukovych could end up being quashed.  One reason would be failings in Ukraine’s legislation on trials in absentia, the other – the very public manner in which people like former President Petro Poroshenko and his Prosecutor General Yury Lutsenko made it quite clear that the new legislation was aimed at convicting Yanukovych.  It is quite clear that Yanukovych’s lawyers were recording all such statements to later use at the European Court of Human Rights as supposed proof of ‘political persecution’.