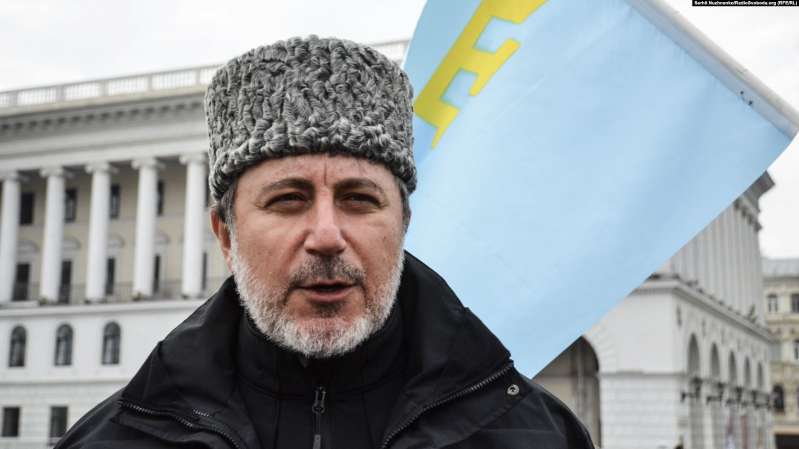 The Russian-occupation ‘Crimean High Court’ has passed a 19-year sentence against Lenur Islyamov, Vice President of the World Congress of Crimean Tatars and the Director of TV ATR.  The charges were of ‘sabotage’, ‘separatism’ and creating ‘an illegal armed formation’, with the first unproven, the second about Islyamov’s opposition to Russia’s illegal occupation of Crimea and the third about a formation that is neither armed nor illegal. Since the ‘trial’ was in absentia and on manifestly political charges, it is next to impossible that any democratic country would extradite Islyamov to Russia.  The court’, however, also allowed a civic suit brought by organizations claiming to be aggrieved parties, and ordered Islyamov to pay 50  million roubles, which will presumably be used as excuse for plundering Islyamov’s business interests.

Officially none of the charges had any link with the Crimean Tatar TV channel ATR of which Islyamov has owned the major part since 2001, and which he now heads.  Russia set about destroying ATR and other Crimean Tatar media within a year of its invasion and annexation of Crimea.  The channel is now forced to broadcast, in Ukrainian, Crimean Tatar and Russia, from mainland Ukraine, but remains one of the main sources of reliable information about all that Russia is trying to conceal.

Islyamov was instead charged and, on 10 December, ‘convicted’ on three lots of charges.  The first was sabotage, with the Russian FSB claiming that Islyamov had been directly involved in a major power outage in November 2015 following damage to electricity pylons in the Kherson oblast (mainland Ukraine). There was no evidence that Islyamov had been involved in the outage on territory which even Russia is not claiming was not Ukrainian.

Despite the lack of direct proof, it is certainly no accident that this was one of the charges.  In September 2015, Islyamov joined with veteran Crimean Tatar  leader Mustafa Dzhemilev and Crimean Tatar Mejlis leader Refat Chubarov in initiating the Crimean Civilian Blockade.  This was initially of goods that were still being delivered to occupied Crimea as though Russia’s invasion and occupation had never happened, and was later extended to the electricity which Ukraine was helping the aggressor state by continuing to supply to occupied Crimea.  Russia’s aggressive propaganda and first ‘criminal prosecutions’ began shortly afterwards.  These were revived in April 2020 after Dzhemilev; Chubarov and Islyamov announced plans for a March of Dignity from mainland Ukraine to Crimea.

Islyamov was also accused of having created the Noman Çelebicihan Battalion (otherwise known as the Asker Battalion) which Russia is claiming is an ‘illegal armed formation’. The Battalion was formed d on 1 January 2016 from people who had taken part in the civic blockade of Crimea. It remains to this day a relatively small formation whose role at present is merely to back the Ukrainian border guards in areas near the administrative border with occupied Crimea.  Islyamov has long indicated that this is a Crimean formation, not only Crimean Tatar. While they would be willing to serve in the Armed Forces in the area of conflict in Donbas, the steps needed to formalize such service have yet to be taken.  This does not, as the Russian-controlled prosecutor claimed, make it illegal.

Russia has already sentenced at least four Crimean Tatars to long terms of imprisonment for alleged involvement in mainland Ukraine in the Battalion, and, Medzhit Ablyamitov is currently on ‘trial’, facing a real 15-year sentence.

The last charges were of six counts of ‘public calls to separatism’, with these brought by the aggressor state whose occupation of Crimea remains internationally condemned and the subject of sanctions.

Polozov is planning to lodge an appeal with the Third Court of Appeal and points out that the sentence was based on the biased testimony of a ‘secret witness’, as well as a proven case where the material was falsified.

Polozov stresses that Islyamov’s position regarding the ‘trial’ has not changed and that he continues to consider [- as does the UN General Assembly, OSCE, EU and all democratic states] that Crimea is a temporarily occupied part of Ukraine’s territory. All of the actions and rulings of an occupation regime are unlawful and in violation of international law.