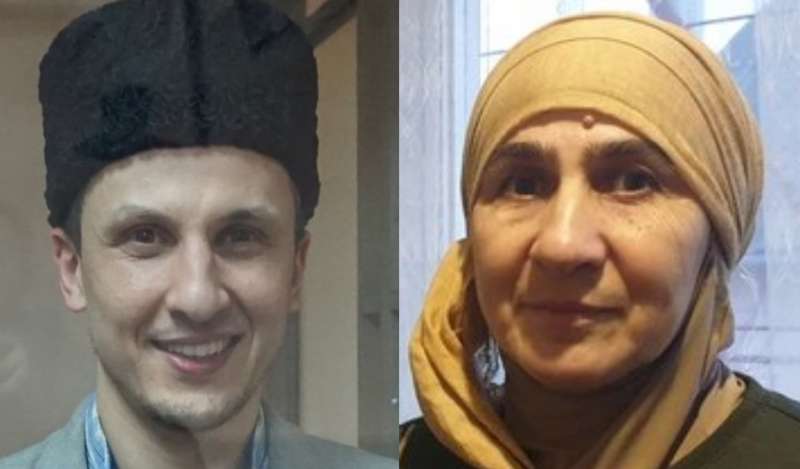 A Russian-occupation ‘court’ has found Venera Mustafayeva guilty of infringing regulations during the pandemic over her solitary picket on the day that her prisoner of conscience son, Server Mustafafayev was sentenced to 14 years’ imprisonment.  The ‘Bakhchysarai district court hearing’ on 11 December took place without the ‘accused’ or her lawyer, Lilya Hemedzhi, although both were present in the building.

Venera Mustafayeva stood outside alone on 15 September 2020, with a placard reading “Conversations in a mosque are not a crime – bring back my son”.  She was nowhere near others, and even the repressive legislation that Russia is illegally imposing in occupied Crimea allows single-person pickets.

Yet, on 22 September the ‘police’ in Crimea initiated administrative proceedings against Venera Mustafayeva on two charges.  She was accused of ‘organizing or holding of a public event without submitting the legally established notification’ (Article 20.2.2 of Russia’s code of administrative offences).  The second charge, which is that she was found ‘guilty’ of on 11 December, was under 20.6.1 and claims that a single-person picket, which, by definition, involves distance from others, ‘infringed the rules linked with the state of heightened risk due to the threat of an emergency’.

The first of these two proceedings was terminated on 12 October, however the Covid-19 charge remained. Russia has been using the pandemic as an excuse to prevent the last remaining possibility for people in occupied Crimea or Russia to peacefully voice their protest, and it was this that ‘judge’ Olha Morozko used to convict the elderly woman and impose a thousand rouble fine.  Morozko asserted in the ruling that it had been passed in the absence of Venera Mustafayeva and her lawyer as the latter had failed to appear, although both women had been waiting in the hall to be called.  This was no misunderstanding as a court assistant did actually call them, but only for the announcement of the sentence.

As well as the sheer absurdity of the charge, it was also illegal as the timeframe for administrative proceedings had been exceeded.  The defence will be lodging an appeal.

Server Mustafayev is the coordinator of the vital Crimean Solidarity initiative, which both helps political prisoners and their families and reports on the ever-mounting repression in occupied Crimea.  He is a civic journalist, recognized political prisoner and Amnesty International prisoner of conscience.  He was arrested in what was, back then, on 21 May 2018, the most flagrant attack on Crimean Solidarity, and on its civic journalists and activists

The charges against the men, under Russia’s ‘terrorism’ legislation, were based solely on unproven allegations of involvement in Hizb ut-Tahrir, a peaceful Muslim organization which is legal in Ukraine.  Russia is using a flawed, secretive and baseless Supreme Court ruling from 2003 which declared Hizb ut-Tahrir ‘terrorist’ as its excuse for imprisoning men for up to 24 years without any crime at all.  Since 2015, it has been illegally using such repressive methods in occupied Crimea, and is increasingly using them as part of a mounted offensive against Crimean Solidarity and Crimean Tatars in general, using such manifestly wrongful charges to present Crimean Tatars as  dangerous ‘terrorists’ and ‘extremists’.

In his powerful final address to the Russian court in Rostov, Mustafayev stated:

“I would like to call on those now in this courtroom, those who can see, read or hear us beyond this conveyor belt of ‘terrorists’ to use common sense and to be honest to yourselves.  It is impossible to live simply and silently, as though nothing has happened.  Impossible to steer clear of politics, to remain deaf and blind in the face of evident injustice, formally coated by law, which is lawlessness. <>  It is stupid to think and hope for a glorious future after the lawlessness from Russia in 2014. Find strength within yourselves to look truth in the eye, nobody will do that for you.”  (more excerpts here)

On 16 September, judges Rizvan Zubairov (presiding); Roman Saprunov; and Maxim Nikitin from the Southern District Military Court sentenced Marlen Asanov  - to 19 years’ imprisonment; Memet Belyalov - 18 years; Timur Ibragimov - 17 years; Seiran Saliyev – 16 years; Server Mustafayev - 14 years; Edem Smailov and Server Zekiryaev to 13 years.  The sentences are all in the harshest of Russian prison colonies, and in most cases a further year or 18 months’ ‘restriction of liberty’ has been ordered. The only positive thing was the acquittal of one of the men – Ernes Ametov.  Since all of the men should have been acquitted, this first ever acquittal in such ‘Hizb ut-Tahrir cases’ may have been to create the entirely false impression that this was a real trial, and not a shameful travesty of justice aimed at terrorizing and silencing Crimean Tatar civic activists and journalists.