Russia actively used human shields and committed other war crimes in its annexation of CrimeaRussian-occupied Crimea and Donbas close to North Korea in Freedom House rating Putin threatens to increase Russia’s ‘support’ for occupied DonbasUkrainian jailed in Russia’s revenge for Maidan punished because of back pain Russia uses punitive psychiatry to imprison Crimean Tatar rights activist indefinitelyUkraine’s most malicious miscarriages of justiceCrimean Tatar Regional Mejlis leader persecuted as Russia openly violates UN Court rulingInterior Minister Avakov accused of manipulating public opinion over Ukraine’s most controversial trial Protests throughout Ukraine following 7-year sentence against civic activist Serhiy SternenkoWill anyone answer for the killings on Maidan?Izolyatsia: a Donetsk concentration camp too toxic even for Russia? PACE finalizes capitulation to Russia, while listing all reasons why this is appeasement Crimes against humanity and war crimes allegedly committed during the armed conflict in the eastern Ukraine – webinar of KHPGApplication practice of Article 109 of the Criminal Code of UkraineApplication practice of Article 110 of the Criminal Code of UkraineRussia indoctrinates children to want ‘to defend’ occupied Crimea against Ukraine Why would Russian Wikipedia censor information on the Donetsk Izolyatsia secret prison?Crimean Tatars sentenced to 18, 17 and 13 years for discussing their faith and Russian persecution 2020: There was no worse year in the realm of human rights after the Revolution of DignityBandera. An Invitation to a Calmer Conversation
• Topics / Terrorism
• Topics / Human Rights Abuses in Russian-occupied Crimea 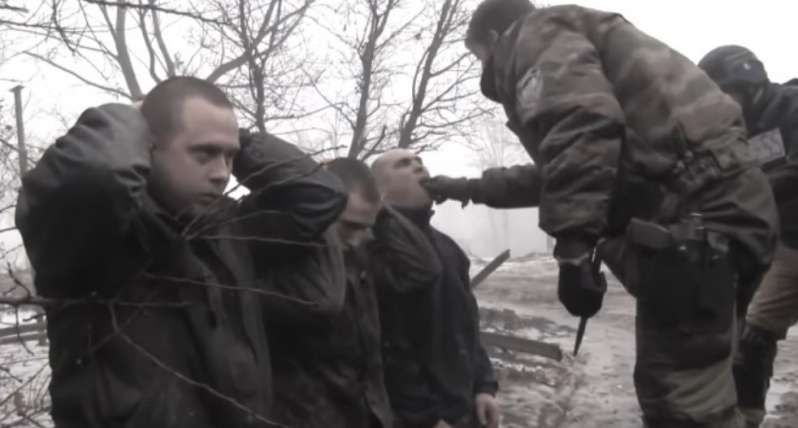 The Prosecutor of the International Criminal Court [ICC], Fatou Bensouda has found reasonable grounds for believing that war crimes and crimes against humanity, falling within ICC jurisdiction, “have been committed in the context of the situation in Ukraine”.  Such crimes, in connection with the conflict in Donbas and with Russia’s ongoing occupation of Crimea are sufficiently grave, she writes, to warrant investigation by the ICC.  This is a long-awaited, and very important, move, one that human rights groups have helped to achieve, by providing the Office of the Prosecutor with detailed information about enforced disappearances; torture and extrajudicial killings; Russia’s persecution of Crimean Tatars and other Ukrainians in occupied Crimea; its conscription and militarization and multiple other violations of international law.  They have also presented witness testimony and evidence of civilian targets in Donbas having been shelled from Russian territory; of civilians being used as human shields in occupied Crimea (and Donbas), and much more.  There is also, of course, ample proof that civilian airliner MH17 was downed by a Russian Buk missile which had been brought from a military unit in Kursk (Russia) and was hurriedly returned to Russia after the disaster that killed 298 people, including 80 children.

Ukraine has yet to ratify the Rome Statute and is therefore not yet a state party to the International Criminal Court.  However the Ukrainian Government has twice (in April 2014, then in September 2015) issued ad hoc declarations recognizing the full jurisdiction of the Court in identifying and prosecuting all those responsible for crimes from 21 2013 to the present day. It was on the basis of these declarations that a preliminary examination of the situation in Ukraine was first opened on 24 April 2014.  It is this (lengthy( preliminary examination which has now come to an end with the Prosecutor announcing that the conditions for opening a full investigation have been met. The Prosecutor’s findings “include three broad clusters of victimisation: (i) crimes committed in the context of the conduct of hostilities; (ii) crimes committed during detentions; and (iii) crimes committed in Crimea. My Office furthermore found that these crimes, committed by the different parties to the conflict, were also sufficiently grave to warrant investigation by my Office, both in quantitative and qualitative terms.”

“My Office has concluded that the potential cases that would likely arise from an investigation into the situation in Ukraine would be admissible. This is because the competent authorities in Ukraine and/or the Russian Federation are either inactive in relation to the categories of persons and conduct that the Office has identified, or because the national judicial system is ’unavailable’ in territory under the control of the opposing party, rendering the competent authorities unable genuinely to obtain the accused or the necessary evidence and testimony or otherwise to carry out their proceedings.”

The Prosecutor goes on to explain that several preliminary examinations are reaching an end at the same time, and in the middle of a pandemic.  In short, speed should not be anticipated.

Nor should it be forgotten that Ukraine has recognized the ICC’s full jurisdiction, which could mean that the Court also finds particular crimes to have been committed by the Ukrainian side.

The most important part of this decision to begin proceedings is, however, that it significantly raises the chances that Moscow and those in Russia implicated in war crimes and crimes against humanity can be held to account.

Back in November 2016, the Office of the Prosecutor declared Russia’s invasion and ongoing occupation to be ‘an international armed conflict’ between Ukraine and Russia, thus falling within its jurisdiction.

Russian President Vladimir Putin’s reaction was swift, but almost comically ineffectual.  The day after the Office of the Prosecutor’s report made headlines, Putin issued instructions which were widely reported as meaning that Russia had left ICC.  It had, in fact, never joined and the instructions were only able to say that they don’t want to be members any more.  More importantly, stating petulantly that you don’t want to play with the ICC does not change the fact that Russia can be deemed liable for crimes committed on foreign territory regardless of whether or not it is a member of the International Criminal Court.

The Prosecutor spoke very positively of the assistance which Ukraine’s authorities had provided to her Office and, later, expresses the hope that Russia will also be cooperative.  Thus far, in fact, Russia has expended huge effort and expense on trying to prove that international courts, like the UN’s International Court of Justice and the International Tribunal on the Law of the Sea do not have jurisdiction to examine the cases brought by Ukraine. It has failed to convince these international bodies, and is now mainly dragging out cases which it can hopefully not win.  The same has been seen with the Dutch trial in absentia of three Russian former FSB or military intelligence officers and one Ukrainian over the MH17 disaster.  The announcement from the ICC comes just a week or two after the European Court of Human Rights announced that it was merging Ukraine’s inter-state case against Russia over its aggression in Donbas with the case brought by the Netherlands against Russia over MH17.    Whether or not such court proceedings are behind recent attempts to give Putin (Russian!) immunity for life, there certainly are reasons why Putin and those implicated with him in undeclared warfare and crimes committed in occupied Crimea and Donbas should be feeling worried.