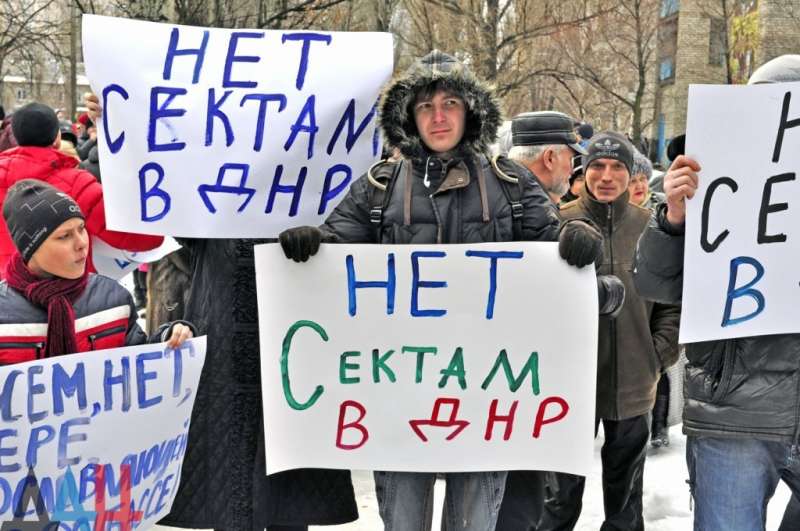 Together with its invasion and annexation of Crimea and aggression in eastern Ukraine, Russia brought devastation to the religious pluralism and freedom that Ukrainians had enjoyed since 1991.  In occupied Crimea, this has led to a huge number of Crimean Tatars and other Ukrainians being imprisoned for their faith, and the Ukrainian Orthodox Church in danger of being driven underground altogether.

The situation in occupied Donbas – the self-proclaimed and Russian-controlled ‘Donetsk and Luhansk people’s republics’ [DLPR] – is similar, although over the last six years important differences have emerged.

For his important study on the situation in occupied Donbas, Dmytro Durnev spoke with religious scholar and former hostage, Ihor Kozlovsky about the huge differences between Russia and Ukraine when it comes to faith.  In Ukraine, there is a wide diversity of faiths and far more practising believers. Statistics are difficult to provide because Law on Freedom of Conscience and Religious Organizations does not allow a register of believers, since faith is each person’s individual choice.

Kozlovsky explains that when the USSR collapsed in 1991, 50% of religious organizations were on Ukrainian territory, only 25% on Russian, despite the Russia having a four times larger population.

Ukraine had, in fact, adopted very liberal legislation regarding religion back in April 1990.  Registration of religious communities is as simple as possible, and optional.  Since then there has been total freedom to preach and try to spread ones faith, and to have links with religious centres abroad (all activities that Russia is either controlling or prohibiting).

Kozlovsky notes that in the Donetsk oblast alone, this led to the number of religious communities increasing between 1991 and 2014 from 180 to 1780.  This was one of only two parts of Ukraine (together with Kyiv) where Orthodox and Greek Catholic congregations were in the minority.  Most believers were members of different Protestant churches.  Kozlovsky was seized by the so-called ‘DPR ministry of state security’ in January 2016 and twice spent Easter imprisoned (before his release in December 2017).  There was no sign of any priests from the Orthodox Church under the Moscow Patriarchate, but Protestants would arrive throughout the day, to leave them Easter cake, etc.

Although Durnev points to a more nuanced situation in 2020, there were reasons for the widespread belief back in 2014-15 that the Russian Orthodox Church and Ukrainian Orthodox Church under the Moscow Patriarchate were supporting the militants.  Most of the armed paramilitary groups fighting the Ukrainian Armed Forces did so under the banners of the so-called Russian Orthodox Army and the Cossack Army.  When militant Igor Druz confirmed to the BBC in August 2014 that they had had carried out extrajudicial killings in Sloviansk, purportedly “to prevent chaos”, he did so under a militant Christian banner.  Druz was a senior aide to Igor Girkin, the  ‘former’ Russian military intelligence officer who led the seizure of Sloviansk in April 2014, and who can also be seen receiving a ‘blessing’ from an Orthodox priest.  The video here shows a Moscow Patriarchate priest ‘ ‘blessing’ the banner of a militant fighting brigade.  Each of the militants then comes up and kisses their banner before going off to kill Ukrainians.

As Durnev points out, you would not find any such videos with Protestant or Greek-Catholic priests, Muslim Imams or Buddhists lending their support to the Russian / pro-Russian militants.

All faiths, however, except the Orthodox Church under the Moscow Patriarchate, took part in the Prayer Marathon  which gathered on Constitution Square in the centre of Donetsk to pray for Ukraine’s unity and for peace from February 2014. The Prayer Marathon continued for 158 days, although it became more and more dangerous with each day.

The participants were well aware that the reason for the danger, the reason why so many participants were taken captive, subjected to mock executions and  one was killed was that they were gathering under the flag of Ukraine.  Most of the leaders of the Prayer Marathon were essentially forced to leave occupied Donbas, some like the late Father Oleksandr Khomchenko and Pastor Sergei Kosyak after being savagely tortured, others, like Said Izmagilov, Mufti of the Spiritual Directorate of Muslims of Ukraine, thanks to Father Oleksandr, who managed to get a warning to the Mufti that he was the next planned target.

In 2020, the situation has not changed dramatically, however, according to Durnev, the special status assumed from the outset for the Russian Orthodox Church and its Ukrainian affiliated Church has not proven quite as clear-cut as had seemed back in 2014.  Nor has the latter’s position regarding the conflict and supposed ‘republics’, with Illarion, Metropolitan of Donetsk and Mariupol, careful to distance himself from any politics and essentially travelling between occupied Donetsk and government-controlled Mariupol for Easter Services.

It is, nonetheless, true that the ‘legislative’ weapons against religious organizations make an exception for churches under the Moscow Patriarchate.   In all other cases, the new ‘religious freedom’ laws have been used to force out very many faiths, while the so-called ‘republics’ have followed Russia in positively banning some, such as the Jehovah’s Witnesses.

Although there were slight differences between ‘DPR’ and ‘LPR’, the basic mechanism was identical.  The ‘laws on freedom of religion’ adopted in 2016 although largely only implemented from 2018, required that all religious organizations ‘re-register’ under the unrecognized ‘republics’. This parrots the demand imposed by Russia on religious organizations in occupied Crimea, with the requirement in both parts of Ukraine under occupation posing the same ethical and legal problem, especially for communities which are part of a greater, Ukrainian religious organization.

The laws, however, were a weapon even against those religious communities who decided, perhaps for the sake of survival, to submit documents for such ‘re-registration’.  Many were turned down and, effectively, outlawed.   In 2018, at least two communities  – the New Life Church in Makiyivka and the Church of the Holy Spirit in Donetsk, which was under what was still officially the Ukrainian Orthodox Church under the Kyiv Patriarchate – suffered attacks, with at least the latter’s church building plundered.

By October 2018, the Institute for Religious Freedom [IRF] reported that, at least in ‘LPR’, all Baptist, Pentecostal, Seventh Day Adventist and Evangelical Christian communities had been refused re-registration, with this meaning a total ban on any group religious activities on territory under the militants’ control.

The only mosque remaining in occupied Donetsk was closed in late June 2018, after an armed search and interrogation of the Imam and worshippers.  The methods were similar to those applied by the Russian occupation regime in Crimea, with the militants in ‘DPR’ citing their so-called law on countering extremist activities as the excuse.

In November 2020, Said Izmagilov told Hromadske Radio that in occupied Donbas, all mosques which refused to comply with the militants’ demands have been closed down.  Only those who agreed to be under the control of ‘D/LPR’ have been allowed to function.  In the Donetsk oblast, all those functioning mosques are under strict surveillance from the so-called DPR ministry of state security’.  The Mufti informed that several thousand Muslims had fled occupied Donbas.  With those remaining, there is extremely limited contact as it is known that they are constantly under scrutiny and any communications with people in government-controlled Ukraine is likely to put them in danger.

The above-mentioned ‘laws’ have been amended several times.  Durnev reports that another aspect of the ‘law’, at least in ‘DPR’, has come into force in 2020.  Now even those religious organizations which were able to re-register, are now forced to go through this process every year, providing full reports on their activities, showing any sources of financing, etc.

Durnev notes that a further amendment was added on 25 November 2020.  This yet again made the document closer to that in Russia and removed the item regarding possible state support for religious organizations.  This, he believes, has yet again demonstrated that “the special status of the Orthodox Church under the Moscow Patriarchate on non-government-controlled Ukrainian territory is fairly loose and unstable.”

‘D/LPR’ have also imitated Russia in banning and persecuting the Jehovah’s Witnesses, using the same ‘law’ on extremist activities as their excuse.  In ‘DPR’, however, they have gone even further than Russia and banned the Mormons.  It would appear that here, and in other cases, such ‘extremism’ may have been directly linked with the wish to seize Mormon buildings.   As Durnev puts it, “It would seem that the logic of the DPR authorities is simple – from those churches that survived the purges of 2014  loyalty is required in the first instance and, in the second, total distancing from political processes.  For ‘bad’ churches, there is a special law on countering extremist activities’.