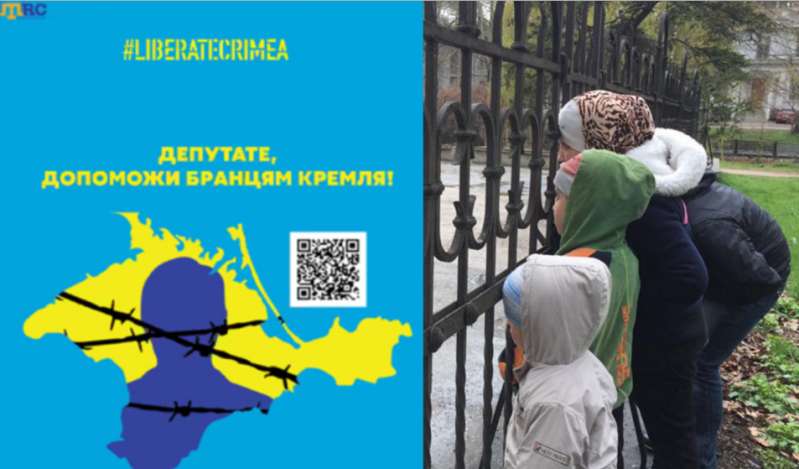 Activists from the civic movement #LiberateCrimea are calling on Ukrainian MPs to take individual Kremlin hostages under their care, with the initiative strongly supported by former political prisoners like Oleg Sentsov and Edem Bekirov.  Although #LiberateCrimea are specifically addressing Ukraine’s legislators, Russia is holding over 100 Crimean Tatars and other Ukrainian political prisoners, and everyone of us can play a role in ensuring that the world knows about such repression and that each victim knows that he or she is not forgotten.

The #LiberateCrimea campaign was launched in an online presentation on 11 December.  The participants put forward specific proposals for MPs, who are asked to:

A press conference will be held on 21 December to inform the public about all MPs who have joined the campaign.

“Our task”, Sentsov explained, “is to make the names of the political prisoners known, since that protects them in the prison colony and helps get them released”.  It is vital, he continued that people know the names of Crimean Tatar human rights activist Emir-Usein Kuku; of the brothers Teymur and Uzeir Abdullayev; of Volodymyr Dudka and Valentin Vyhivsky.  If MPs become the political prisoners’ ‘godparents’, that will make it possible to speak about them at all levels.

Edem Bekirov stressed that such an initiative is vital for all Kremlin hostages, and he calls on deputies from regional councils to also take part.  Bekirov is so far the only Crimean Tatar whom Russia has thus far released in an exchange. He was one of three Ukrainian hostages with severe health issues who were freed (as was Sentsov) on 7 September 2019.  There have been no releases since then, and Russia has taken prisoner at least as many Ukrainians as were freed that day, including some, like Dzhemil Gafarov, with equally grave health issues.

The appeal to Ukrainian MPs was also supported by Oliver Loode, the Estonian civic activist whose involvement in #LiberateCrimea and condemnation of Russia’s persecution of the Crimean Tatar people, was viewed by Moscow as such a ‘threat’ that he was banned from the Russian Federation for a record 55 years.  He stressed that Ukrainian MPs could play a key role and serve as a moral example to European Parliamentarians and legislators from other countries.

Many of the promises made by Ukraine’s leaders with respect to the Kremlin’s hostages have proven empty.  Instead of passing the needed legislation to enable the spending of money allocated for helping political prisoners and their families, the government recently allocated some of it to create a rather suspicious state enterprise, called ‘Reintegration and Renewal’ (details here).  It is therefore imperative that as many MPs as possible become directly, and personally, involved in defending the Kremlin’s hostage.

There are well over a hundred Crimean Tatar and other Ukrainian political prisoners in occupied Crimea and Russia, as well as at least 230 hostages and POWs held prisoner in occupied Donbas.  While important that Ukrainian legislators take heed of this call, others, some acts of support and solidarity need only the Internet.   It is vital that we all use Twitter or social media to circulate information about political prisoners and make calls to government representatives in our own country, the EU, etc.