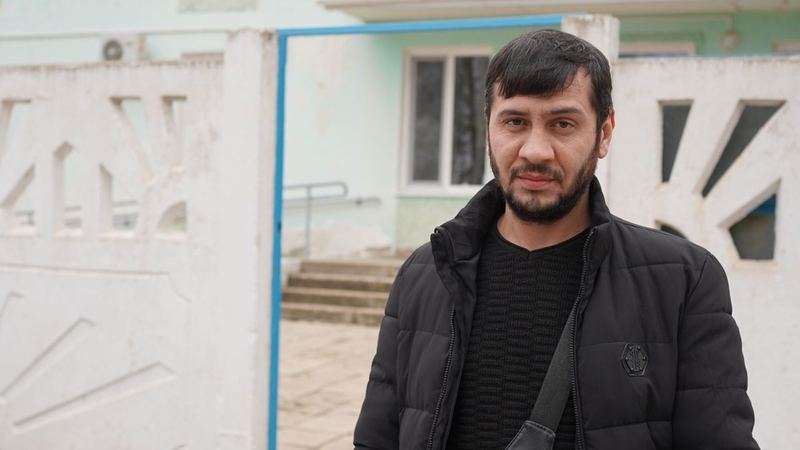 The trial has begun in Russian-occupied Crimea of Aider Kadyrov, a civic journalist reporting on human rights violations for Crimean Solidarity and the Russian website Grani.ru.  Kadyrov is charged under a menacing recent addition to Russia’s legislation against so-called ‘extremism’ and ‘terrorism’ that punishes for failing to report a person to the FSB.  Since the charges pertain only to a discussion five years ago on a social network page, Kadyrov is not alone in seeing the prosecution as politically motivated.

Four Crimean Tatars were seized on 31 August 2020 after officers arrived, together with men in masks, at 6 a.m. and carried out searches of their homes.  The events that day, carrying on until late in the evening, seemed more akin to an abduction, with lawyers prevented from seeing Kadyrov; Aider Ablyakimov; Enver Topchi; and Ridvan Umerov  and the men’s families being told  – falsely – that the men were not in the FSB building.  This was of particular concern in the case of Kadyrov, who suffers from diabetes and whose blood sugar level can fall dangerously low if he does not receive food.  The FSB were informed of this before they even took Kadyrov away, yet they ignored his condition, clearly hoping to use it to force him to sign the ‘confession’ they demanded of him.   This almost worked as, by 11 p.m. when lawyer, Alexei Ladin was finally admitted, Kadyrov was in such a weak state that he was prepared to sign what they put in front of him.  It seems he did, however, retract his signature.  The lawyer of one of the other men reports that his client was put under pressure to reject his services, doubtless in favour of the kind of FSB-appointed lawyer who is there to sign papers and tell the men that it will be worse for them if they don’t ‘confess’.  With Kadyrov’s father and Alyakimov’s brother having lodged formal reports that the men were missing, and with four lawyers waiting and more than willing to remind the FSB of the men’s rights, the lawyers were finally allowed in, and through the evening their clients were released under signed undertakings not to move away from their homes.

Kadyrov was finally released in the early hours of 1 September, almost 18 hours after being taken from his home.

Kadyrov, and the others, are all charged with ‘failing to inform of a crime’, under Article 205.6 of Russia’s criminal code (on ‘terrorism’).   At least one other ‘trial’, that of Enver Topchi, has already begun in the Sovyetsky District Court, while Kadyrov’s preliminary hearing was held at the Niznegorsk District Court on 17 December.  Russia has no right to impose its legislation upon illegally occupied Crimea, however that is not the only issue here. This particular article of Russia’s criminal code was introduced in July 2016, after the 2015 correspondence on the social network VKontakte on which the FSB are basing this prosecution.  This is not the first time that Russia is ignoring fundamental principles, such as that the law is not retroactive, but that does not make their behaviour any the less lawless.

The charges pertain to correspondence which allegedly took place on VKontakte in 2015 with a person called Umidzhon Dadazhonov. The latter is supposed to have called on them to take part in fighting in Iraq on the side of the so-called ‘Islamic State.  Seemingly, the men reacted by telling Dadazhonov to stop taking part in the fighting and to return home.

The men are now themselves on trial simply because they did not report Dadazhonov to the FSB.  Or, in Kadyrov’s case, because he is active in the civic initiative Crimean Solidarity, which seems just as likely.

Kadyrov and the other men face anything from a fine to a year’s imprisonment with the lawlessness of the prosecution unlikely to be viewed as an obstruction.

Russia’s use of this article of its criminal code in a case involving somebody fighting in Syria should not distract us from the profound danger of the charge.  Russia could just as easily begin using this ‘non-denunciation’ charge in connection with over 80 prosecutions of Crimean Tatars and other Ukrainians on politically motivated ‘terrorism’ charges.  Most of the men are charged with involvement in Hizb ut-Tahrir, a peaceful Muslim organization which is legal in Ukraine and most countries and which is not known to have carried out any acts of terrorism anywhere in the world.  Russia declared it ‘terrorist’ in 2003 for political reasons (to enable the forced return of asylum seekers to Uzbekistan where they faced torture and imprisonment for their faith).  It is now using such charges in occupied Crimea against civic activists and journalists, or those in other ways seen as ‘dissident’.  No real proof of involvement in Hizb ut-Tahrir is even required, as the FSB uses ‘secret witnesses’ and loyal ‘experts’ to obtain sentences of up to 20 years without any crime.    If such a wrongful conviction were then used to bring criminal charges against people who had not reported the non-existent ‘terrorism’, this could become a new and terrifying weapon against any civic activist, dissident thinker or other Ukrainians under Russian occupation.

Worth noting that the Russian FSB, while scouring social media for ‘incriminating evidence’ against Crimean Tatar or ethnic Ukrainians seen as ‘dissident’, completely ignored tell-tale signs (including the purchase of large amounts of weapons) that 19-year-old Vladislav Roslyakov was planning a terrible crime.  Roslyakov murdered 21 students and teachers in Kerch on 17 October 2018 – a crime Russia stopped calling terrorist after it became clear this was not a crime they could blame on ‘Ukraine’ or Crimean Tatars.