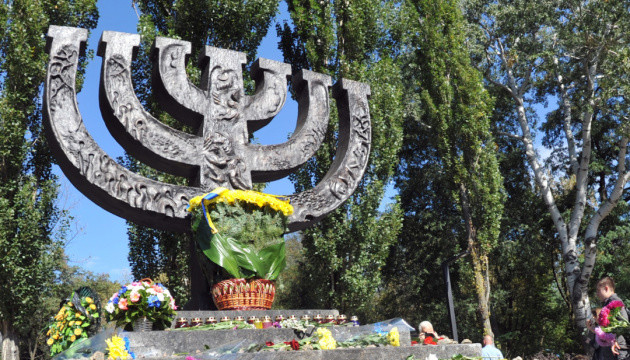 The Menorah at Babyn Yar

Prominent Ukrainian Jewish figures have initiated an impassioned appeal against the latest plans linked with the highly contentious  Babyn Yar Holocaust Memorial Complex.  They suspect that the new plans, which are sponsored by Russian oligarchs, for a synagogue to be built on the site of a Kyrylivske Christian Orthodox graveyard are deliberate provocation, aimed at inciting anti-Semitism in Ukraine or treating understandable outrage as proof of anti-Semitism.   Their appeal is open to all who, like them, find it deeply disturbing that this ‘Russian project’ [BYHMC] is being preferred to a Ukrainian plan which, in full accordance with all religious traditions, does not permit any construction work on the site of graveyards or mass burials.

The controversy is certainly not new, but it reached a new and shocking peak on 25 December this year.  While many Ukrainians were celebrating Christmas, excavation work, seemingly organized by Max Yakover, General Director of the Babyn Yar Holocaust Memorial Centre [BYHMC],  began at a site behind the Menorah at Babyn Yar.  The land there was, until 1929, a Kyrylivske Orthodox cemetery.   Although Yakover told Radio Svoboda that the work had been to ascertain if there were graves and that they had dug only a metre deep, the videos shared on social media were interpreted by many as suggesting that graves were being dug up.  Yakover claimed that no graves were found, only two bones, probably from a human skull.  He promised a report on the work this week, however this has not yet appeared.

Josef Zisels, Co-President of the Vaad, or Association of Jewish Organizations and Communities of Ukraine and former Soviet dissident, referred to the excavations as ‘Shameful’ and is openly unconvinced by the assurances Yakover is giving.  On 29 December, in a post entitled ‘Vandalism in action’, he wrote that excavation work had been continuing that day with the use of heavy equipment.  It was carried out by the Kyiv expedition of the Academy of Sciences’ Institute of Archaeology  (headed by Vsevolod Ivakin) which had received a permit in January 2020 from the Ministry of Culture.  This, however, was for carrying out archaeological investigations in Kyiv with the help of a metal detector.  The equipment seen in the video here is assuredly no metal detector!  Zisels noted also that the Director of the Institute of Archaeology had categorically denied that his institute is carrying out any work at Babyn Yar.

Back in August 2020, shortly after Ukrainian President Volodymyr Zelensky publicly expressed his support for BYHMC, Vitaly Nakhmanovych, one of the authors of the Ukrainian project, directly addressed him over the plans.  He was appalled that many of the projects for a memorial centre, including BYHMC, envisage building the centre on old Jewish, Kyrylivske Orthodox and Karaim burial sites . How, he asked, can we hope to preserve hundreds of Jewish cemeteries and places of mass burial if Jews themselves begin to build on them?

In September, BYHMC erected an ‘installation’ to mark the 79th anniversary of the Babyn Yar Massacre of over 33 thousand Jewish men, women and children.  As well as doubts about the work itself, there were serious concerns about where it was placed.  Zisels dismisses the BYHMC assertions that the installation was beyond the boundaries of the former Jewish gravesite and says that independent researchers have found documentary evidence showing that the plot of land where construction is planned lies on the territory of that Jewish graveyard.

Zisels was one of the initiators of what began as a Second Appeal of Ukrainian Jews to Ukraine’s Civil Society in support of the Ukrainian project for the memorialization of Babyn Yar, following the first such appeal, summarized in English here. It now, in fact, has become a general appeal, and can be endorsed here.

The signatories express their support for the need “to honour the memory of the tens of thousands of Jews and people of other nationalities and faiths killed by the Nazis at Babyn Yar during the Second World War. The best representatives of our and other peoples have struggled for this over many years. However it is not a matter of indifference how and at what a price this idea is brought to life. We consider any solution to be inadmissible and impossible if it envisages construction work on the sites of cemeteries and places of mass burial, this runs entirely counter to Jewish and general human tradition and morality. We therefore support the Ukrainian project for comprehensive memorialization of Babyn Yar which does not envisage any fundamental construction work on the land where there were Orthodox; Jewish; Karaim or Muslim graveyards, and where the last remains are buried of tens of thousands of victims of the Nazi executioners.

It is precisely for this reason that we were appalled by the plans of the initiators of the Russian project for the Babyn Yar Holocaust Memorial Centre [BYHMC] to build a so-called temporary memorial synagogue on the territory of the former Kyrylivske Orthodox Cemetery in the Babyn Yar clearing, immediately behind the Menorah Monument.

This is not the first attempt by the management of the Russian project, in a manner that is cynical and unacceptable both for religious Jews and for believers of all faiths,, as well as for decent people in general, to use the territory of the graveyards and the reserve land of Babyn Yar to continue their provocative ideas and PR projects. One recalls the aesthetically dubious art installation aimed to coincide with the anniversary of the beginning of the executions at Babyn Yar and erected in September this year, despite public protects, directly on the land of the destroyed Jewish cemetery.

It is in this place that the BYHMC initiators are planning to build a gigantic complex, a museum-memorial, in violation of all possible prohibitions and restrictions of the Jewish religion, as well as of Ukrainian legislation and Ukraine’s international commitments.

Jewish religious tradition unequivocally prohibits any construction on the sites of graveyards and mass burials. The attempt to build a synagogue on the land of an Orthodox cemetery is an affront to Jewish spiritual and moral values, as well as overt provocation against Orthodox Christian believers, against all of those whose relatives lie buried at the Kyrylivske Cemetery.

(Signatures can be added by writing your name and country of residence to the list on Facebook, or by filling in the form at the bottom here (the lines to fill in are, in this order: email; full name (last name, name and, if you have it, patronymic); your position / place of work; your country of residence), then press the box saying Надіслати )

As reported, there has been considerable public reaction to the plans concerning the memorial complex, especially following the appointment late in 2019 of a controversial Russian art director, Ilya Khrzhanovsky.  An appeal to Ukraine’s leaders in May this year was endorsed by around 700 prominent Ukrainian public figures, historians, writers and others.  Zelensky has so far, unfortunately, ignored that appeal, those of Ukrainian Jewish figures, and others, and come out in favour of ‘BYHMC’.  His words of support spoke of the need for a memorial centre for honouring the victims of the Holocaust at Babyn Yar, although this is no choice between BYHMC and not honouring the victims of a heinous crime, but between two projects for doing so.  What is in question is whether the current project is the right one for Ukraine.  The reasons for concern about this include the decision to abandon a project drawn up by Ukrainian historians at the request of the Ukrainian government; Khrzhanovsky’s deeply shocking proposals for the museum and the plans to build the museum on the territory of old Jewish and other burial sites.  The other key reason is that the financial strings behind this essentially private project are being pulled by Russian businessmen, known for their success under the regime of Russian President Vladimir Putin.

While public concern over this grotesque ‘experiment’ prompted assurances that the plans would be assessed at the end of this year, there are compelling reasons for not feeling reassured.  Khrzhanovsky clearly has the backing of the main sponsor, Mikhail Fridman, and, as Petrovsky-Shtern notes, “Given its financial support, it will definitely be constructed with the help of international nouveau-riches eager to see the institution eclipse the most well-financed Jewish or Holocaust museums in Berlin, Frankfurt, Moscow, Paris, Tel-Aviv, Warsaw, and Washington.”

While the above-mentioned appeals have not been heeded, they have certainly been noticed.  One indication of this was in the way the nationality of some of the key businessmen providing the funding was mentioned.  Mikhail Fridman and German Khan went from being referred to as Russian businessmen to being described as ‘Ukrainian Jewish’,  They and Pavel Fuks were certainly born in Soviet Ukraine, but all made their money in Russia, with only Fuks having, reportedly, severed his business interests in Russia because of the latter’s aggression against Ukraine.

The conflict described above is essentially confirmation of the position presented in the first Appeal of Ukrainian Jews.  They saw the appearance of the Russian project as a kind of game with many moves that Russian President Vladimir Putin’s propagandists are so fond of, with Ukraine forced into a lose-lose situation.