Donbas children deployed as weapons in Russia’s hybrid warfare against UkraineRussian-controlled ‘Donetsk republic’ creates ‘children’s army’ to instill ‘correct views’Crimean Tatar political prisoner ‘retried’ until Russia’s FSB got the sentence they wantedProsecution witness in Russia’s latest political trial exposes fake testimony to jail Crimean Tatar for 15 years Application practice of Article 110 of the Criminal Code of UkraineRussian proxy Donetsk ‘republic’ moves to plunder Ukrainians who don"t take its ‘citizenship’Russia indoctrinates children to want ‘to defend’ occupied Crimea against Ukraine “Now and then the flame dies down, but solidarity is a stream of sparks”Crucial victory for Ukraine in ECHR case against Russia over Crimea Why would Russian Wikipedia censor information on the Donetsk Izolyatsia secret prison?Crimean Tatars sentenced to 18, 17 and 13 years for discussing their faith and Russian persecution 2020: There was no worse year in the realm of human rights after the Revolution of DignityBandera. An Invitation to a Calmer ConversationInvestigation of individual terrorist crimesKey insurgent admits there was no civil war, just Russian aggression A brief description of the KHPG strategic litigations in July–December 2020Ukrainians forced to take Russian citizenship, or lose their homes in occupied Crimea Moscow’s proxy ‘republics’ announce that Donbas is and always was ‘Russian’Russian oligarch plans for Babyn Yar seem aimed at fuelling anti-Semitism in Ukraine Russia begins its most repressive trial of Crimean Tatar journalists and activists
• Topics / Children’s rights 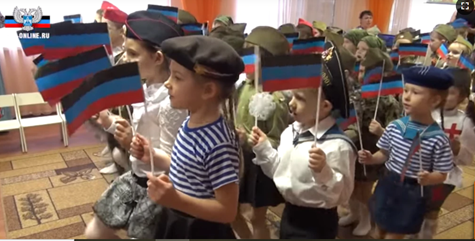 Russian-installed ‘leaders’ of the self-proclaimed ‘Donetsk people’s republic’ [‘DPR’] have begun trumpeting a new ‘Russian Donbas doctrine’ pushing the idea that Donbas was created by Russians and has always been Russian.  There is little that has not been heard before in this supposedly ‘new ideology/ and the main question is probably whether the new ‘Russian Donbas’ drive has been initiated by Moscow, and, if so, for what purpose.   As with Russian President Vladimir Putin’s decrees making it easier for Donbas residents to get Russian citizenship, this does not need to point to an imminent plan to formally annex occupied Donbas.  Such ‘Russian Donbas’ narrative further boosts the arsenal of propaganda which residents of Donbas, especially children, are subjected to, while also helping Moscow to rewrite the historical truth about its pivotal role in causing the conflict in eastern Ukraine.  The claim will now be that it was ‘Russian Donbas’ that asserted their historical identity and formed the so-called republics.  In fact, a simple glance at the events in the Spring of 2014, and at the public opinion surveys taken on the eve of those events, make it clear that there was no ‘Russian Donbas’, only a small minority of Ukrainians with pro-Russian views who were unable to attract a following, until Russia sent in heavily armed militants who seized control.

There was huge fanfare in both occupied Donbas and Russian media for the very little substance that Russian-installed ‘DPR leader’ Denis Pushilin came out with on 13 December 2020.  He announced that they would be drawing up a ‘Russian Donbas’ doctrine which would, purportedly, become “a platform for the ideological structure of the republic, reflecting the Donbas’ historical links with Russia”.  He claimed that in 2014 they had known “what we were fighting for and against what”, but now they need a ‘Russian doctrine’ which will supposedly “reflect the main aspects of the cultural-historical development of the region; the world-view system of the population; the mentality; the formation of the idea of the republic’s statehood. It should become a program document, the basis for educational processes and decisions in the system of state planning”.

During the supposed discussion with teachers, academics and others, at which Pushilin revealed these plans, it was asserted that the doctrine would be “a lever for integration of the region into the Russian cultural and economic realm”.  Plans for “widespread public discussion” were announced, something that one commentator in government-controlled Ukraine said was depressingly reminiscent of Soviet times under Leonid Brezhnev.

Judging by the excerpts quoted,  Pushilin appeared to be trying to blame the lack of an ‘ideological platform’ for ‘DPR’ residents’ woes.  We just need to “scientifically back” and endlessly discuss this new ‘doctrine’, and problems will be solved.  There has not been a full publication of Pushilin’s words, but as Serhiy Horbatenko, writing for  Donbas.Realii drily notes, the following can be gauged:

“’DPR’ was created by Russians living in Donbas;

Russia existed in the fifth century

The Donbas territory was always Russian.”

This is in conflict with historical facts, but does it clash with Moscow’s official position on occupied Donbas which says that the latter should be within Ukraine?

Not necessarily.  The Russian far-right activists and some of their pro-Russian Ukrainian counterparts were convinced in April 2014 that formation of the ‘republics’ was merely a step towards formally joining Russia.  It is possible that Putin was actually planning further annexation of Ukrainian territory, but stopped short after western countries did finally set a red line that must not be crossed.  From Moscow’s perspective, either implementation of the Minsk Accord in the form Russia demands, or ongoing conflict serve Russia’s purpose adequately enough by destabilizing Ukraine.

Ihor Kozlovskyy, renowned Donetsk religious scholar and former ‘DPR’ hostage, says that the move does not surprise him.  He calls it the latest stage in Russia’s hybrid warfare against Ukraine, with the aim being to achieve a global change in consciousness in order to continue its hybrid war.  He considers this new ‘DPR’ document to be “One of the provincial variants of the ‘Russian world’ ideology in which countries of the former Soviet Union are a part of Russian civilization”.

The announcement of work on a ‘doctrine’ is, Kozlovskyy believes, aimed at infecting people’s consciousness with an ideological virus.  The public need to gain immunity to this virus, but such immunity comes only through freedom of thought, discussion and understanding, both of history, and of the prospects for development.

He recalls that during the torture he was subjected to in captivity, he heard one voice shouting “the Russian World has come”.

Kozlovskyy believes that Kyiv should treat this new militant development as an attack and react appropriately since this impinges upon Ukraine’s information security.

The attack began back in April 2014, both with the military aggression and with Putin’s notorious speech when he referred to ‘Novorossiya’, suggesting that this included the Kharkiv; Luhansk; Donetsk and Odesa oblasts.  Ukraine’s independence is an affront to people like Putin for various reasons, not least the fact that Putin and the Russian Orthodox Church under Patriarch Kirill need to be able to date their ‘Russian World’ back to Kyivan Rus in the ninth century.

Judging by the comments of at least one of the ‘academics’ who headed the call for ‘discussion’ of this new ‘Russian Donbas doctrine’, the temptation is to go back even further. Oleksandr Kolesnyk came out with the following pronouncements:

“The Donetsk people’s republic developed in the context of the Slavonic world, in the context of Russia, beginning from the fifth century of our era.  The history of Kyivan Rus, or the Ancient Russian state, as it would be better to say, was shared.  This was the cradle of both the Ukrainian people and the Russian people, of the contemporary Russian multinational people.  That should unite us”.

It does not.   All of this ‘Russian World’ mythology is having a disastrous impact on young people in occupied Donbas and Crimea, who are being taught a seriously distorted view of history, and fed open lies about the events of 2014 and since.

The report on the ‘DPR information agency site’ about the Russian Donbas doctrine is a classic example.  According to this account, Russia played no role in the events of Spring 2014, while Ukraine’s role was only negative, that of the aggressor.  The ‘republics’ emerged, according to this version, as the will of the population of Donbas as expressed in ‘referendums’ (on 11 May 2014).

This has nothing to do with reality, but children and young people may well remember little or nothing of that real world, and this is the propaganda that they are constantly barraged with.

This is certainly deliberate policy, as set out in the ‘Program of patriotic education for children and young people of the DPR’, adopted back in 2017.   The document clearly states that “patriotic education should become the main objective of republic’s state ideology as a part of Russian world ideology” and proposes systematic work on forming “high patriotic consciousness, devotion to their Fatherland, readiness to carry out their civic duty and constitutional obligations in defending the interests of DPR”.

It is for the sake of these young Ukrainians, who will now also be indoctrinated with myths about ‘Russian Donbas’, that Ukraine’s government needs to be developing its own methods of response.  Not counter-propaganda, but promotion of all means that will enable young people living under occupation to realize where the truth lies.