The childhood Russia ended in 2020 with machine guns and arrests 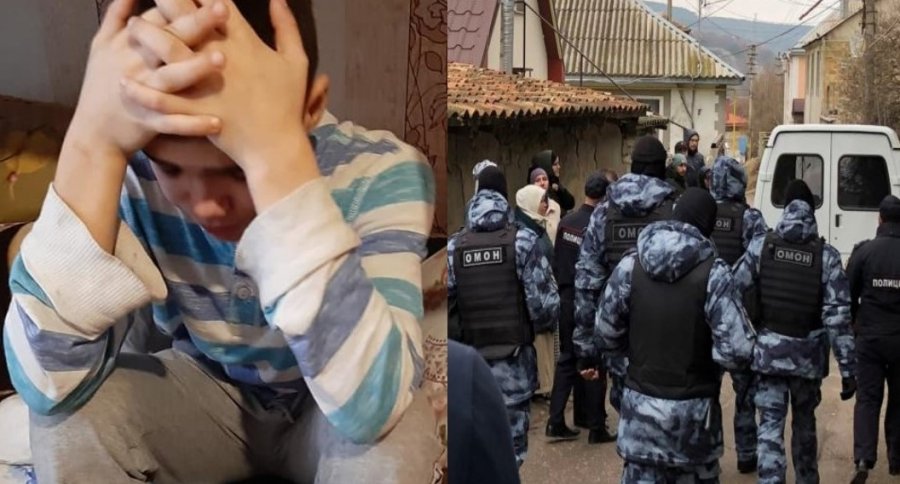 One of the children whose fathers were taken away on 11 March 2020, during the operation Photos Crimean Solidarity

Childhood ended abruptly for 20 Crimean Tatar children in 2020, when armed and masked Russian enforcement officers burst into their homes, turned them upside down and took their fathers away.  There was no reason for the machine guns, since the searches were about finding – or planting – ‘prohibited literature’, and not one of the men was accused of an actual crime.  No reason, that is, except for instilling terror, which certainly appears to be one of the main aims of all such ‘operations’.

185 children in Crimea have now had their fathers taken from them, and, if Russia has its way, most will be adults before their fathers return from this new Russian form of deportation.

Back in 2016, with arrests becoming ever more frequent, renowned Crimean Tatar journalist Lilya Budzhurova wrote a pivotal article entitled ‘These are our children now’.  Repressive measures were swift, with a formal warning issued within a couple of days of “the admissibility of extremist activities”.

She refused to be cowered and established the civic initiative Bizim Balalar [Our Children] which provides help to the children of Crimean Tatar political prisoners and of those who were abducted and disappeared without trace.

Budzhurova stressed again, after the wave of armed searches on 7 July 2020, that it  is immaterial whether you share the same religious or other views as the men arrested.  Their orphaned children have now become our children, and need our help.

Worth remembering also that many of the political prisoners have elderly parents who risk never seeing their sons again.  The parents of civic journalist Ruslan Suleimanov and his brother, Eskender, as well as of the brothers Osman and Seitumer Seitumerov have lost both their sons.

In all of the cases here, men are arrested purely on charges of involvement in the peaceful Muslim organization Hizb ut-Tahrir, which is legal in Ukraine and most countries.  It is likely that the Russian Supreme Court’s secret ruling in 2003, finding Hizb ut-Tahrir ‘terrorist’ was passed for political reasons, with Moscow looking for a way of forcibly sending Uzbek refugees back to Uzbekistan where they faced religious persecution.  Over the next 10 years, people were prosecuted as a result of that 2003 ruling, but were either not imprisoned at all, or received short sentences.  This began to change in 2013 and now sentences of up to 24 years are being imposed without any whiff of a crime, let alone one of terrorism.

In occupied Crimea, Russia is increasingly using such charges as a weapon against civic journalists and activists, especially from the civic initiative Crimean Solidarity.

2020 was not a record-breaker, like 2019, for the number of civic journalists, activists and others arrested, but it did mark a new low, with the FSB arresting both Alexander Sizikov, a man who is totally blind and disabled, and Amet Suleimanov, who has a severe heart condition.

Armed and some masked officers turned up at seven homes early on 11 March, carrying out an illegal search even of a home that is not presently occupied.  In typical breach of procedure, all the lawyers who arrived to represent the men were prevented from being present during the search.  In at least one case, ‘prohibited literature’ was planted by the FSB, which was an activity they clearly didn’t want lawyers recording.

Suleimanov is a Crimean Solidarity activist and journalist (streaming information about arrests and political trials onto the Internet).  He had, however, been forced to reduce all activities due to very severe medical problems (chronic rheumatic heart disease, aortic insufficiency, coronary artery disease and other conditions).

The FSB also searched the family home of journalist and TV ATR presenter Seitumer Seitumerov (yes, same name), although he has been in mainland Ukraine for around three years.

The FSB were only interested in written material or computer technology, and did not even pretend to be looking for weapons or explosives.  Suleimanov’s wife reports that the officers planted two new books, specially put in book covers, on the desk where their children do their schoolwork.

The brothers, Seitumer and Osman Seitumerov,  Rustem Seitmemetov and Amet Suleimanov are charged with ‘involvement’ in Hizb ut-Tahrir under Article 205.5 § 2  of Russia’s criminal code, with this carrying a sentence of from 10 to 20 years’ imprisonment. ATR presenter Seitumer Seitumerov is, for the moment, the only person whom the FSB are trying to label the ‘organizer’ of a Hizb ut-Tahrir group (Article 205.5 § 1) with this potentially carrying a life sentence.

Suleimanov’s condition was so evidently life-threatening that he was placed under house arrest, rather than detention. He is, however, being taken in a prison van on the 12-hour journey to Rostov in Russia where the trial is beginning, and it is likely that he will be held in detention there if there are hearings over several days. He is so weak that he cannot possibly hope to be able to take a proper part in the court hearings, which is yet another violation of his right to a fair trial.

Amet Suleimanov has four sons, the eldest 11, the youngest still a baby; Seitumer Seitumerov has a baby son, Suleyman and his uncle, Rustem Seitmemetov has two small daughters.

11 searches were carried out on 7 July, with the masked men in full military gear finding nothing among children’s toys and clothes, except the ‘prohibited books’ that they had brought with them  At least four of the men arrested: Vadim Bektemirov; Alexander Sizikov; Alim Sufianov and Emil Ziyadinov have taken part in activities to help political prisoners and to ensure that information is circulated about such repression.  The fact that Sizikov is blind and has difficulty walking has not stopped the FSB from charging him with ‘organizing a Hizb ut-Tahrir group’ under Article 205.5 § 1.  The FSB claim that two men  Sufianov and Seyran Khairedinov were ‘involved’ in this supposed cell, with the charges of ‘involvement’ under Article 205.5 § 2.  Members of both Sufianov and Khairetdinov’s families have spoken of the enforcement officers having ‘found’ what they themselves planted during the ‘search’.

Due to the repressive regime which Russia has imposed in occupied Crimea, it is even difficult to financially support Bizim Balalar from other countries. We can, however, all help these children by ensuring maximum publicity about the religious and political persecution that their fathers are facing.  Moscow is using the fact that the men were forced to obtain Russian citizenship (without which you can’t get work, healthcare, etc.) to try to deny its undoubted violation of international law and the men’s political prisoner status.  While we, individually, may not have any clout over the Kremlin, western governments do, and they can be persuaded to exert pressure.