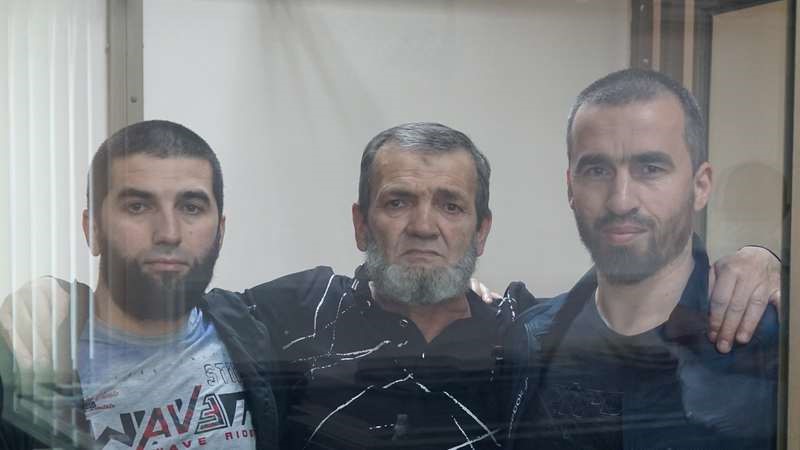 A Russian court has sentenced three Crimean Tatars, including a father and son,  to horrific terms of imprisonment without any crime, on the basis of discussions about their Muslim faith and political subjects, including Russia’s persecution of  Muslims.  This was claimed to have been “anti-Russian” and ‘anti-constitutional’.  With these sentences, Russia wants to imprison three members of one family to 44.5 years’ imprisonment, with Fatma Ismailova, the daughter, wife and sister of three victims, now facing administrative charges for having asked permission in court to touch her father, Enver Omerov’s, hand.

Any doubts that Russia is targeting Crimean Tatars with such persecution were dispelled during the night before the sentencing on 12 January when only Crimean Tatars were stopped from trying to cross the Crimean Bridge in order to be present outside the court in Rostov.  Many Crimean Tatars had anticipated such repressive moves and had travelled to Rostov in advance, with around 50 gathering outside the court with T-shirts showing photos of the men and the words “No to state terror!” and “Stop the repression of families!”.  A further 150 people gathered outside the Russian-controlled Crimean Garrison Military Court, with police officers demanding to see their documents and openly photographing them.

The sentences passed are significantly higher than those that a Russian court would hand down in the case of serious violence or similar offences, and here not one of the men was accused of any recognizable crime at all.

59-year-old Enver Omerov was sentenced to 18 years’ harsh regime imprisonment.  His 32-year-old son Riza Omerov to 13 years; and Aider Dzhapparov was sentenced to 17 years.  All of the sentences will be appealed, of course, however the fact that they were passed at all, in the absence, not only of any evidence, but of any real charges, leaves little scope for optimism.  Enver Omerov’s son-in-law, Rustem Ismailov, is already serving a 13.5 year sentence on identical charges to those brought against his brother-in-law.  The ‘trial’ of Ismailov and four other Crimean Tatars was equally flawed, yet the Russian Supreme Court upheld all the sentences, merely reducing each by six months.

In all these cases, the men are accused essentially of thought crimes, although the Russian FSB uses a secretive and politically-motivated  Russian Supreme Court ruling to claim charges of ‘terrorism’.   The men were all charged with either ‘organizing’ a Hizb ut-Tahrir group, or being ‘involved’ in such a group.  Hizb ut-Tahrir is a peaceful, international Muslim organization which is legal in Ukraine and most countries.  The 2003 ruling declaring it ‘terrorist’ is not backed by any evidence that Hizb ut-Tahrir has been involved in terrorism anywhere in the world.  Vitaly Ponomarev from the renowned Memorial Human Rights Centre believes that the ruling was designed to enable Russia to forcibly return Uzbek refugees to Uzbekistan where they faced religious persecution.  The move was immensely cynical then, and is now being used in occupied Crimea as a weapon, very often against Crimean Tatar civic journalists and activists.

These ‘trials’, which are known to provide FSB officers with promotion or bonuses, all follow a certain pattern, with one or more of the defendants designated as ‘organizers’ (under Article 205.5 § 1 of Russia’s criminal code).  In this case, Enver Omerov and Aider Dzhapparov were accused of having together ‘organized a Hizb ut-Tahrir group’, which Riza Omerov was accused of involvement in (under Article 205.5 § 2).  On 27 February 2020, it was learned that all three men were also being charged with planning violent seizure of power.  Not one of the searches had found any weapons, etc., nor was there any mention, even in the illicitly taped conversations, of any such plans, and the extra charge is based solely on that same Supreme Court ruling which was kept secret until it could not be challenged.

The European Parliament and other European and international bodies have condemned all such ‘trials’ of Crimean Tatars and other Ukrainians and demanded the men’s release.  In June 2020, the Memorial Human Rights Centre recognized Enver and Riza Omerov and Aider Dzhapparov as political prisoners.

Such recognition was, in fact, inevitable, as Memorial HRC considers all those convicted solely of involvement in Hizb ut-Tahrir to be political prisoners, since Russia is wrongly applying terrorist charges without any element of terrorism.  Its assessment is also important, however, as Memorial stresses that Russia is in breach of international law in applying its legislation in occupied Crimea.  All of these trials and sentences flagrantly violate Russia’s commitments under the Fourth Geneva Convention and other international treaties. Memorial notes that a particularly unacceptable aspect to this case is that the investigators treat the fact that the men condemned the persecution of Muslims in Russia as proof of their ‘guilt’.

The charges against the three men in general read like something out of the old chronicles of Soviet repression.  Even had there been evidence of genuine involvement in Hizb ut-Tahrir, the men were still only accused of ‘meetings to discuss Hizb ut-Tahrir ideology’, of gathering material for such meetings; of circulating such ideas and trying to interest others in them.

In fact, there was no such evidence, with the charges based on three ‘kitchen chats’ on religious and political subjects’.  These were sent to the FSB-loyal ‘experts’ used in such cases because they can be relied upon to find alleged evidence that the men belong to Hizb ut-Tahrir by the use of this or that word.  The lawyers representing the men have repeatedly noted that such ‘experts’ often entirely misinterpret common Crimean Tatar words, with this almost certainly not a genuine mistake.

There were also two ‘secret witnesses’ whose identity is not known and whose ‘testimony’ cannot be verified.  It is on the basis of such testimony, which is often prompted either by the prosecutor or by somebody sitting with the person, that Enver Omerov has been sentenced to 18 years’ imprisonment – a term which for a man of his age is as good as a death sentence. In August 2020, one of these supposed ‘witnesses’ was unable to give any good reason why his identity should be kept secret, and said he was not revealing it because he “didn’t want to”.  Prosecutor Yevgeny Kolpikov swiftly corrected him, effectively prompting him to say that he feared for his safety.  The judges saw this, and plenty of other occasions where the man was evidently receiving prompts and said nothing.  This is despite evidence from several witnesses, who gave testimony without concealing their identity, that Riza Omerov was not present at the alleged ‘meeting’ that one of these ‘secret witnesses’ spoke of.

There can be no question that FSB investigator, Sergei Bosiyev and prosecutors Yevgeny Koptilov and Dmitry Volkov did not understand that the charges against these three men, two of whom have several small children, were fundamentally flawed and based on fabricated and falsified evidence.

All of this must have been equally evident to the three judges at the Southern District Military Court in Rostov:  presiding judge Roman Saprunov; together with Rizvan Zubairov and Maxim Nikitin.  The sentences were passed, with bitter poignance, on 12 January, a day marked in Ukraine since 1972 as the Day of the Ukrainian political prisoner.