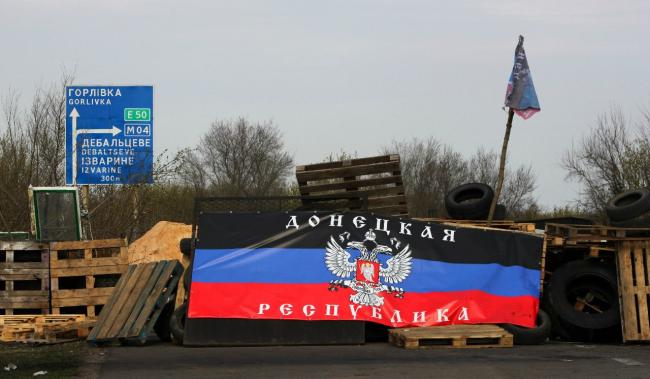 The self-proclaimed and Russian-controlled ‘Donetsk people’s republic’ [DPR] is planning measures to force Ukrainians to obtain ‘passports’ for an entity which is not recognized even by Russia.  One of the clear aims is surely to provide justification for the plundering of property owned by Ukrainians forced to leave their homes, since the new ‘law’ would effectively strip anybody without the supposed ‘DPR citizenship’ of their property and other civic rights.  If adopted, this could directly, and adversely, affect up to two million Ukrainians.

As almost always, when dealing with Russia’s proxy ‘Donetsk and Luhansk republics’, the information comes from an unnamed source, “close to DPR leader Denis Pushilin” and is impossible to independently verify.  On the other hand, the report by Dmytro Durnev, writing for ‘Spectre’, comes just months after the Eastern Human Rights Group warned of similar developments.

Durnev’s source informs that discussion is underway in Donetsk of a draft ‘bill’ which would totally cut off displaced persons, living in government-controlled Ukraine, as well as creating huge problems for any Donbas residents not wanting to take on ‘republic citizenship’.  The discussion “at expert level” is about a draft ‘law on DPR citizenship’ and the likely cost of its implementation.  The bill is apparently based on an analogous document in the unrecognized, but similarly Russian-controlled, ‘republic of Abkhazia”.

It is proposed that this would restrict the rights of Ukrainians registered in Donbas, but without the so-called citizenship from being able to sell their own flats or homes.  This has already been a major problem for Ukrainians forced to leave occupied Donbas with nothing, and would now effectively finalize the loss of their property until de-occupation. Many left without all the relevant documents confirming ownership which can only compound their problems.  The ‘bill’ would also prevent those without a ‘DPR passport’ from buying property or from engaging in business activities.

Durnev suggests that with time residents of the unrecognized ‘republic’ who have not taken on ‘citizenship’ would be treated with suspicion and could end up arrested for 30 days, without any charge, on the supposed pretext of ‘needing to establish their identity’.

The idea would be that, by 2025, the only document protecting an individuals’ rights would be ‘a DPR citizen’s passport’.

‘DPR’ is, thus, closely following Russia which has made it impossible for Crimeans without Russian citizenship to own property in most parts of occupied Crimea.  The Russian occupying state is, in violation of international law, treating Ukrainians living or at least owning property in Ukrainian Crimea as ‘foreigners’.

Presently at least 15% of the population of the pseudo republic have ‘DPR passports.  These are needed to obtain the Russian citizenship that Russian President Vladimir Putin illegally expedited in 2019.   Durnev notes that there are no official statistics, but says that there are likely to be roughly the same percentage of people holding Russian citizenship.   As reported here, a recent study found that the number of takers for Russian citizenship appeared to be much lower than predicted either by Moscow or by the puppet ‘republics’.  The study carried out by the Donetsk Information Institute (DII) estimated the number of Russian passport-holders to be no higher than 7% of the population.

Over the months since then, businesspeople in ‘DPR’ have been ‘strongly advised’ by the DPR tax authorities to get DPR passports, and pensioners have been told that they will not receive any DPR social payments without this ‘passport’.

All of this, Durnev reports, has led to huge demand with people having to wait for this supposed citizenship. He has been told that, because of the inability to provide so many ‘passports’, the ‘bill’ is likely to impose a transitional period, even up to 2025.  As well as scaring people both in ‘DPR’ and beyond, and getting those who can to jump, the move, Durnev suggests, is also intended to demonstrate that ‘DPR is here to stay’.

‘DPR’ has already begun what it calls a process of ‘nationalization’, with this essentially meaning the appropriation of enterprises that were previously under Ukrainian jurisdiction or that belong to people now living in government-controlled Ukraine.  According to the NGO Vostok SOS, such seizures are on a mass scale