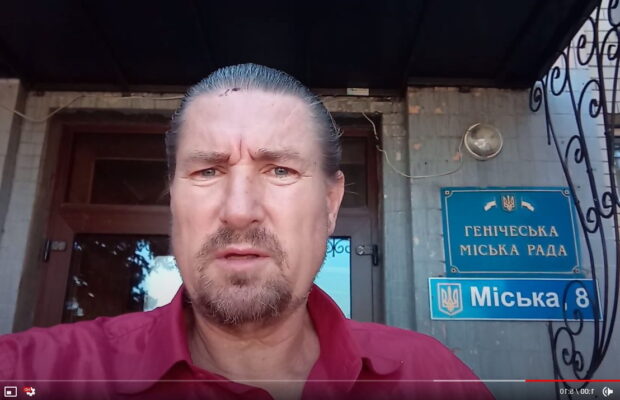 Edward Kovalenko after his return from occupied Donbas

Ukraine’s SBU [Security Service] has arrested Edward Kovalenko and charged him with working for both Russia’s security service and that of the self-proclaimed and Russian-controlled ‘Luhansk people’s republic’ [LPR]  This new development comes 13 months after Kovalenko was handed over to ‘LPR’ as part of an exchange of prisoners.  The demand by Russia via its proxy ‘republic’ to have Kovalenko released in the exchange aroused considerable attention at the time since Kovalenko’s main claim to notoriety was his supposed links with a far-right Ukrainian nationalist party that Russia has formally banned.

In fact, Kovalenko’s real role as a provocateur was recognized by many back in 2004, and later, both before his exchange and after he returned to the Kherson oblast in 2020.  It is much less clear from the SBU’s report whether he is charged with provable criminal offences, and not merely activities that many of us may view as reprehensible.

0n 23 January 2021, SBU announced the arrest, identifying Kovalenko as “a resident of the Kherson oblast” and showing him on a video, albeit with his face obscured. They say that they have “uncovered and documented [his] unlawful activities” and allege that he was working as an agent for Russia’s FSB and its affiliated ‘LPR ministry of state security’ [LPR MGB].

The report asserts that SBU investigators have established that in January 2021, Kovalenko received a task via a secret channel from his handlers to artificially foster the spread of mass protests, especially the so-called ‘Tariff Maidan’ [protests over increases in communal charges], with this being for financial reward. The aim of the activities, it is alleged, was “to discredit the state authorities and destabilize the situation in the country” and Kovalenko is supposed to have already arranged a number of protests.

The SBU also assert that they have evidence that, on the instructions of the FSB, Kovalenko, as leader of a pro-Russian party, gathered biased information about elements of crisis in the socio-economic sphere.  The SBU believe that the Russian security service wanted this to create a constant potential for protest in the Kherson oblast, which borders occupied Crimea, with the idea being that it should then spread around the country.

Kovalenko allegedly visited occupied Simferopol in February 2021 on instructions from his handlers.  There he is supposed to have met with Sergei Aksyonov, the Russian-installed ‘Crimean leader’.  Describing him as a “Russian agent”, the SBU alleges that he also received a task to initiate a petition in the Kherson oblast to reinstate water supplies to occupied Crimea and to launch the relevant information campaign.  He was also, allegedly, supposed to popularize separatist sentiments and the idea of autonomous status of certain oblasts in Ukraine.

The SBU assert that he was recruited in ‘LPR’ and given the code name ‘Dzhygur’. The pre-trial investigation now underway is under Article 110 of Ukraine’s Criminal Code – encroaching upon Ukraine’s territorial integrity and inviolability.

As well as doubts as to whether the above-mentioned activities actually constitute a crime, there are concerns about the video which the SBU have posted on their report. It is unnervingly similar to those regularly produced by the FSB and the Donbas ‘pseudo-republics’.  There is nothing to suggest that a lawyer was present, and should have been since Kovalenko is effectively providing a confession.  The whole performance also felt as though Kovalenko was reading something prepared for him. He says that he had connections with an FSB officer who “asked him” to organize protests against Ukraine joining NATO and to “give [the party] UNA-UNSO a more fascist direction”.  He asserts that he was allocated 30 thousand dollars for this, but was forced to give the FSB officer 9 thousand of it.

He then goes on to say that “after the 2019 exchange between Ukraine and Russia”, he was in non-government controlled Luhansk where, at the end of May, “after checks”, an FSB MGB person contacted him and asked him to find current politicians and SBU officers and find corruption in order to use this.  He then mentions both the ‘Tariff Maidan’ protests and the signatures to a petition about reinstatement of water supplies, and says that it is known that the latter was commissioned by Aksyonov. He ends by expressing remorse for his actions.

There is a further problem with this video.  Half of it is entirely irrelevant to any charges now against Kovalenko.  Even were charges in principle possible, they would be time-barred, since Kovalenko appears to be referring to his activities over 15 years earlier.

In the 1990s, Kovalenko was one of the leaders of the far-right nationalist party UNA-UNSO [the Ukrainian National Assembly – Ukrainian People’s Self-Defence].  In 2002, the party folded, with several breakaway groups forming.  Kovalenko created his own apparently far-right group, UNA Kovalenko.  Anton Shekhovtsov, a researcher into far-right movements, reported back in 2014, that Kovalenko had played a critical role during the summer of 2004 in trying to associate presidential candidate Viktor Yushchenko with the far right and anti-Semitism.  Despite opposition from the Yushchenko team, Kovalenko organized a march which purported to be in support of Yushchenko’s candidacy.  At a meeting after the march, Kovalenko declared:   "We, the right-wing nationalist party, are supporting the only one candidate from the right-wing forces: Viktor Yushchenko. One Ukraine, one nation, one people, one president!". And he gave a Hitler salute.”

It was clear to many commentators back in 2004 that Kovalenko was a provocateur,  however it was suggested then that his paymaster was not the FSB, but Viktor  Medvedchuk.  At the time, Medvedchuk was Head of Leonid Kuchma’s Presidential Administration.  He was also, and remains, a close associate of Russian President Vladimir Putin who very openly, as well as covertly, supported Kuchma’s intended successor, Viktor Yanukovych.  Both the latter, and Russia, had a clear interest in trying to discredit Yushchenko and Ukrainian nationalists, however Kovalenko’s apparent admission following his latest arrest to working for an FSB officer is at the very least unexpected.

Kovalenko dropped his far-right Ukrainian nationalist person, at the very latest, back in 2014.  As reported, he was sentenced to five years’ imprisonment in May 2017 on charges of obstructing the legitimate activities of Ukraine’s Armed Forces and other military formations (Article 114-1 of the Criminal Code). He was charged with organizing an anti-mobilization rally on 27 January, 2015 and the ultimatum expressed at it, that if mobilization did not stop in Ukraine, the protesters would block roads and seize control of the military recruitment office, police and administrative buildings.  Kovalenko’s attempts to block mobilization coincided with the major offensive by Russian soldiers and Russia-backed and heavily armed fighters aimed at capturing Debaltseve in Donetsk oblast.

In November 2016, Kovalenko gathered signatures for an appeal to the above-mentioned Sergei Aksyonov.  The latter was supposed to write to Putin, asking him to help provide the Kherson oblast city of Henichesk with gas.   In his interview to Krym.Realii, Kovalenko had dropped all pretence of patriotism and was critical only of Ukraine’s “pseudo-leaders”.

It was reported back in August 2020 that Kovalenko had returned to the Kherson oblast and was expressing the intention to campaign in the local elections on a platform echoing the Kremlin narrative about the war in Donbas and about Ukraine in general. In the first interviews Kovalenko gave in ‘LPR’, he mentioned nothing about his supposed far-right nationalist’ phase, with his story beginning in 2014/15 with what he claimed was his active campaigning for peace. In the interviews he gave, he expressed the view that Russians, Ukrainians and Belarusians are all one people, and praised ‘LPR’ and its Donetsk counterpart as having “defended their independent republics”.  This is broadly the platform of his ‘SPAS’ or Socio-patriotic assembly of Slavs, party which has as its motto “Slavs of all countries, unite!”

The SBU has already used charges of violating Ukraine’s territorial integrity or of treason in other cases where Ukrainian citizens have actively promoted a pro-Russian position on the war in Donbas, on Russia’s occupation of Crimea, etc.  There were legitimate doubts, for example, in the case of Ruslan Kotsaba, whether activities that we condemn fall under the scope of the Criminal Code. It remains to be seen whether the SBU have better evidence to back their charges against Edward Kovalenko.