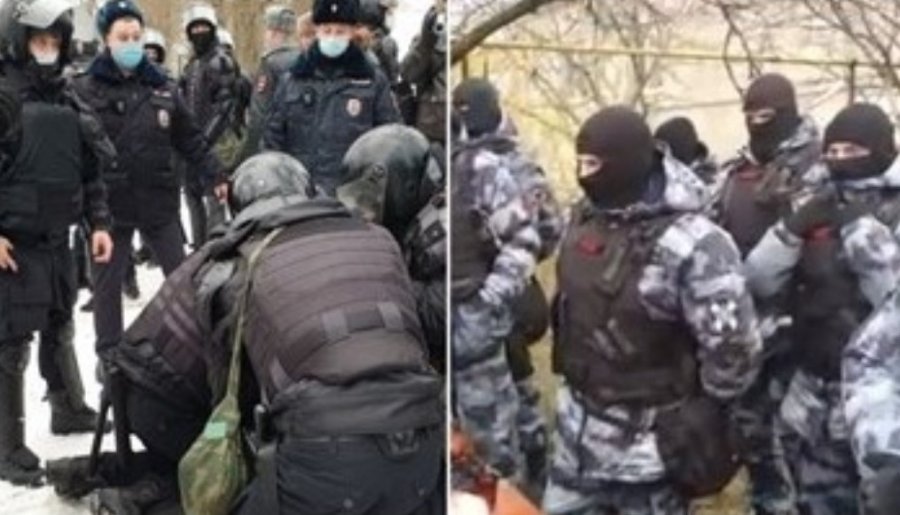 From left Protester forced to the ground in Pskov, 23.01.2021 Photo Ludmila Savytskaya, RFERL, Crimea 27.03.2019 During the armed arrests of 24 Crimean Tatar civic journalists and activists

Several thousand Russians were detained on 23 January while trying to take part in peaceful protests.  Many are likely to face long prison sentences on fabricated charges, yet EU foreign ministers could do no more on 25 January than decide to see whether Alexei Navalny is released before deciding on further sanctions.  This is two weeks after a Russian court sentenced three Crimean Tatar political prisoners to 13, 17 and 18 years without any crime, and as new laws are set to still further crush any freedom in occupied Crimea and Russia.

There has long been a need for much harsher sanctions against Russia and its functionaries who have brought repression and terror to occupied Crimea.  If the EU agrees, and it does, that Russia is violating international law by illegally occupying Crimea, how can it not apply sanctions that hurt when Russia is holding over 100 Crimean Tatar and other Ukrainian political prisoners?  Russia has reacted to the efforts of the civic initiative Crimean Solidarity to report on human rights violations by imprisoning around 35 of its civic journalists and activists. While nobody is disputing that Navalny’s imprisonment is politically motivated, why are the EU and all democratic countries confining themselves to messages of deep concern when men are sentenced to 15 or 20 years for reporting on riots violations and for practising their faith?  When mothers and wives of political prisoners are themselves detained and prosecuted for peacefully protesting against such injustice and when Crimean Tatars are regularly harassed and ‘warned’ that they must not engage in ‘extremist’ behaviour?

There is no question that the EU are not aware of these abuses and others, which have been repeatedly documented and are mentioned in numerous UN General Assembly, European Parliament, OSCE and other resolutions.  None of those, however, are binding and Russia simply ignores them.  It will continue to do so with impunity unless they are accompanied by sanctions, and by real measures, such as cancellation of Nord Stream 2.

The situation has now become especially acute, not because, or at least not only because of Navalny’s arrest, but due to the extraordinarily repressive laws passed at the end of 2020, as well as others which are now underway.  A number of the most prominent Russian human rights NGOs have addressed an appeal to the EU in connection with these new laws.  While the NGOs talk only about the serious threats such legislation poses to Russian civil society and fundamental human rights, any such laws will also be applied in illegally occupied Crimea.

The measures include even further extension of Russia’s restrictions on those it labels ‘foreign agents’.  The law on so-called foreign agents has enabled the regime to place independent NGOs under serious pressure since 2012, and the new legislation will give the Justice Ministry the right to prohibit specific programs, without any clearly defined list of reasons.  Back in December 2019, Russian President Vladimir Putin signed into force a law making it possible to label virtually any journalist, blogger or civic activist a ‘foreign agent’.  This has now been even further broadened, with those recently labelled ‘foreign agents’ include Lev Ponomarev, head of the persecuted ‘For Human Rights’ NGO.  As Ponomarev pointed out, the Russian authorities were calling him a ‘foreign agent’ for seeking adherence to Russia’s own Constitution.

The Memorial Human Rights Centre, which Russia has been systematically trying to destroy, via ‘foreign agent’ legislation and other means, is the only Russian human rights organization which has, amid distressing silence from international rights organizations, systematically followed persecution of most Crimean Tatar and other Ukrainian political prisoners.  Any attack on it still further helps Russia’s offensive against Crimeans facing persecution under Russian occupation.

Another bill which Putin has already signed into law introduces possible imprisonment for so-called ‘defamation’, while making the definition of defamation dangerously broad and, therefore, easy to abuse.  Talk about the ‘Crimean occupation leaders’ on your own Facebook page, and you could find yourself facing a 2-year sentence.

In their appeal, the human rights groups point out that the new measures will lead to a sharp increase in the level of persecution for ‘dissent’, as well as of government control over society. Under threat of administrative or criminal prosecution, any debate or discussion on issues of public concern will be stifled.

“A legal basis is being created for the prohibition by the authorities of any initiative that critically assesses government policies or even deviates from them. As a result, the activities of NGOs, civic initiatives, mass media and active citizens will be strongly restricted even further. In addition, many people living in Russia will be deprived of qualified assistance in protecting their civil, political, social and economic rights and the right to a healthy environment, in receiving services in the field of education, health care and other areas of work of civil society organisations.

It is clear that these legal instruments are aimed at further suppressing civil society in Russia and restricting fundamental freedoms, including freedom of association, freedom of peaceful assembly, freedom of expression, and freedom to disseminate and receive information. The difficult situation of Russian civil society and Russian citizens, who have been subjected to ever increasing pressure over the past decade, will deteriorate further as a result of the application of these norms. We are convinced that these laws and bills unlawfully restrict constitutional rights and freedoms and contradict Russia’s international obligations within the framework of the Council of Europe, the UN and the OSCE.”

The authors of the appeal ask for “immediate reaction”, although the measures they propose largely fall within the broader framework of deep concern and condemnation.

Moscow has demonstrated its indifference to messages of concern, deep or otherwise, and needs significantly harsher measures.

The first Ukrainian political prisoners have been in Russian captivity for well over six years and the sentences, especially against Crimean Tatars who dared to show solidarity with political prisoners and / or peacefully practise their faith are now significantly higher than those used against dissidents in the last decades of the Soviet regime.  Real sanctions, including against those FSB officers; prosecutors and judges complicit in such persecution, are needed now.