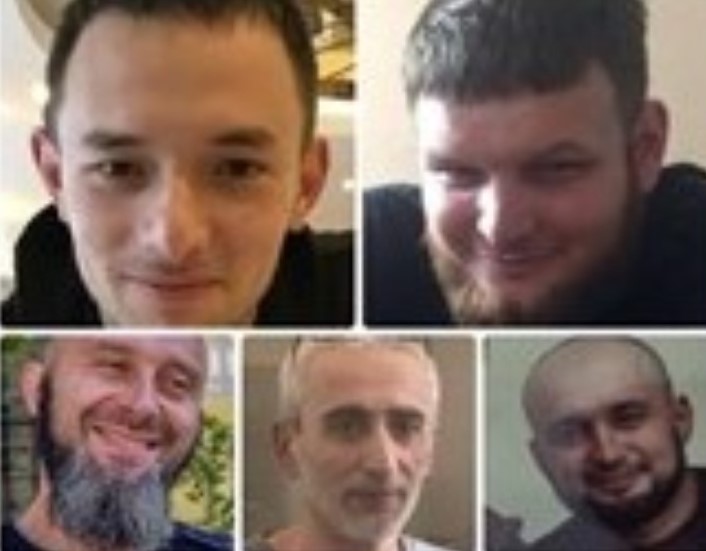 Crimean Tatar journalist Remzi Bekirov and four civic activists were taken from occupied Crimea to Russia last week to face ‘trial’ on charges that have elicited international condemnation.  Russia is already in flagrant violation of international law through its persecution of the Crimean Tatars and their effective deportation to Russia.  It added torture to that list, by transporting four of the men: Rayim Aivazov; Farkhod Bazarov; Riza Izetov and Shaban Umerov ‘in a glass’, - a cell of no more than half a metre in length and width.  Only Bekirov, who is 2 metres tall and in ill health was spared this treatment which the European Court of Human Rights has previously classified as equivalent to torture.  The journey from Simferopol to Krasnodar is long and gruelling even in decent circumstances, and here, in the middle of winter, human rights activist Riza Izeta had no heating at all, while in Bekirov’s case, it stopped working several hours before the end of the journey.  On their arrival at the SIZO [remand prison] in Krasnodar, Raim Aivazov was placed in a cell where the men have to take turns sleeping as there aren’t enough beds.

Most of the 25 Crimean Tatar civic journalists and activists have now been moved to Russia, with hearings due on 24 February. It will soon be two years since the men were seized during Russia’s most open attack on the Crimean Solidarity civic initiative and on its journalists and activists.  Almost all of the men at least helped prepare parcels for political prisoners; gave vital support for their families and attended politically-motivated court hearings.  Since Russia has crushed all independent media in Crimea and forced professional journalists into silence about rights violations or enforced exile, many Crimean Tatar activists also assumed the role of civic journalists.  Four of the men arrested on 27 March 2019 – Osman Arifmemetov ; Remzi Bekirov; Rustem Sheikhaliev; and Ruslan Suleymanov were all playing a critical role in providing information about the persecution and other rights violations in occupied Crimea.  Bekirov had also recently become an accredited journalist for Grani.ru, one of the few Russian Internet publications that reports on human rights violations in Russia and occupied Crimea.

The armed raids and arrests on 27 March 2019 were by no means the first time that Russia had attacked civic activists, however the scale and obvious targeting of civic journalists and activists on this occasion did elicit international protest. Human Rights Watch called the arrests “an unprecedented move to intensify pressure on a group largely critical of Russia’s occupation of the Crimean Peninsula” and demanded the dropping of all charges and release of the men.  The human rights group stated unequivocally that attempts “to portray politically active Crimean Tatars as terrorists” is aimed at silencing them.  Freedom House and Civil Rights Defenders called the arrests “yet another serious abuse of power by the de facto authorities, transparently aimed at striking fear into a community that has suffered severely during Russia’s occupation of Crimea”.  The Memorial Human Rights Centre almost immediately declared the men political prisoners and stated unequivocally that the FSB was using mass arrests to try to crush the Crimean Tatar human rights movement.

23 men were arrested on 27 March, and in the early hours of the following day, with two other civic activists, Rayim Aivazov and Eskender Suleymanov (Ruslan Suleymanov’s brother) later also taken prisoner.

All are accused of ‘involvement’ in the Hizb ut-Tahrir movement, a peaceful Muslim party which is legal in Ukraine.  In 2003, Russia’s Supreme Court declared Hizb ut-Tahrir ‘terrorist’ in a ruling which neither the party, nor human rights groups were informed about until after it was too late to appeal.  Until 2016, when it was joined by the repressive Uzbekistan regime, Russia was the only country in the world to call Hizb ut-Tahrir ‘terrorist’ and it has never provided any grounds for such a decision against a movement not known to have committed any acts of violence anywhere in the world.

After invading and annexing the 25 Ukrainian citizens’ Crimean homeland, Russia has also charged them with “planning a violent seizure of power and change in Russia’s constitutional order” (Article 278).

It was learned in August 2020 that the FSB had split up the group of 25 political prisoners into five groups, with each facing an absolutely identical ‘trial’.  The aim of such cloned trials is almost certainly to deflect attention from such clear persecution of civic activists and journalists.

Ruslan Suleymanov, b. 21.04.1983, is a physics teacher and Crimean Solidarity civic journalist.  He has two children (after the tragic death of his youngest child, Musa in July 2020.  Russia hit new depths in not allowing Ruslan to attend his son’s funeral.)