• Topics / The right to liberty and security 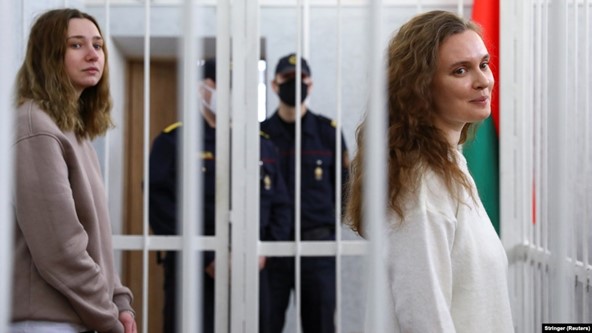 By RFE/RL's Belarus Service   Two journalists for Belsat, a Polish-based satellite television station aimed at Belarus, have each been sentenced to two years in prison for reporting live from a rally in Minsk in November, a move seen by the European Union and rights watchdogs as being part of an ongoing crackdown on independent media.

On February 18, Judge Natallya Buhuk of the Frunze district court in the Belarusian capital, sentenced Katsyaryna Andreyeva and Darya Chultsova after finding them guilty of "organizing public events aimed at disrupting civil order."

Andreyeva, 27, and Chultsova, 23, in their last statement in the courtroom, again rejected the charges against them, calling them politically motivated as their only reason to be at the protest was to do their job as reporters.

Read our coverage as Belarusians take to the streets to demand the resignation of President Alyaksandr Lukashenka and call for new elections after official results from the August 9 presidential poll gave Lukashenka a landslide victory.

Andreyeva also demanded the "immediate release" of herself, Chultsova, and "all political prisoners in Belarus."

The two journalists were arrested on November 15 while they were covering a rally in Minsk commemorating Raman Bandarenka.

Bandarenka died from injuries sustained in a vicious beating by a group of masked assailants -- whom rights activists say were affiliated with the authorities -- during one of the weekly rallies demanding the resignation of authoritarian ruler Alyaksandr Lukashenka.

Lawyer Syarhey Zikratski, a member of the two journalists' defense team, called the sentences "absurd," emphasizing that journalistic activities cannot be defined as the "disruption of civil order."

"The journalists just covered a protest action. We all followed their reports and heard how they did it. The words they used were just a description of what was happening there and were wrongfully used as the basis of the charge against them," Zikratski said.

Andreyeva's husband, Ihar Ilyash, who is also a journalist, said the trial had a predetermined outcome given that the judge was just following the prosecutors' orders.

"Now, all of us journalists must report even more about the facts and truth to fully destroy this terrorist regime," Ilyash said after the sentences were pronounced.

Belarusian opposition leader Svyatlana Tsikhanouskaya praised the two journalists in a tweet for remaining strong after their sentences were pronounced.

"Just look at Darya and Katsyaryna -- strong, smiling, and saying goodbye to their loved ones from behind bars. Lukashenka can't break us," Tsikhanouskaya wrote.

Belarusian human rights organizations have recognized Andreyeva and Chultsova as political prisoners and demanded their immediate release and the dropping of all charges against them.

The sentencing of Andreyeva and Chultsova is "one of many ways Belarus's government has retaliated against journalists for reporting on peaceful protests and human rights violations," Anastasia Zlobina, coordinator for Europe and Central Asia at Human Rights Watch, said in a statement.
She said at least seven other journalists were behind bars in Belarus awaiting trial on similar criminal charges.
Earlier this week, Belarusian authorities raided the homes and offices at least 40 journalists and human rights defenders.

Lukashenka, who has run the country since 1994, was declared the landslide victor of an August 9 presidential election.

However, outrage over what was seen by both the opposition forces and the general public as a rigged vote has sparked continuous protests since, bringing tens of thousands onto the streets with demands that the longtime strongman step down and a new election be held.

Security officials have cracked down hard on the demonstrators, arresting thousands, including dozens of journalists who covered the rallies, and pushing most of the top opposition figures out of the country.

Several protesters have been killed in the violence and some rights organizations say there is credible evidence of torture being used by security officials against some of those detained.

Lukashenka has denied any wrongdoing with regard to the election and refuses to negotiate with the opposition on stepping down and holding a new vote.

The European Union, the United States, Canada, and other countries have refused to recognize Lukashenka, 66, as the legitimate leader of Belarus and have slapped him and senior Belarusian officials with sanctions in response to the “falsification” of the vote and the postelection crackdown.

RFE/RL's Belarus Service is one of the leading providers of news and analysis to Belarusian audiences in their own language. It is a bulwark against pervasive Russian propaganda and defies the government’s virtual monopoly on domestic broadcast media.