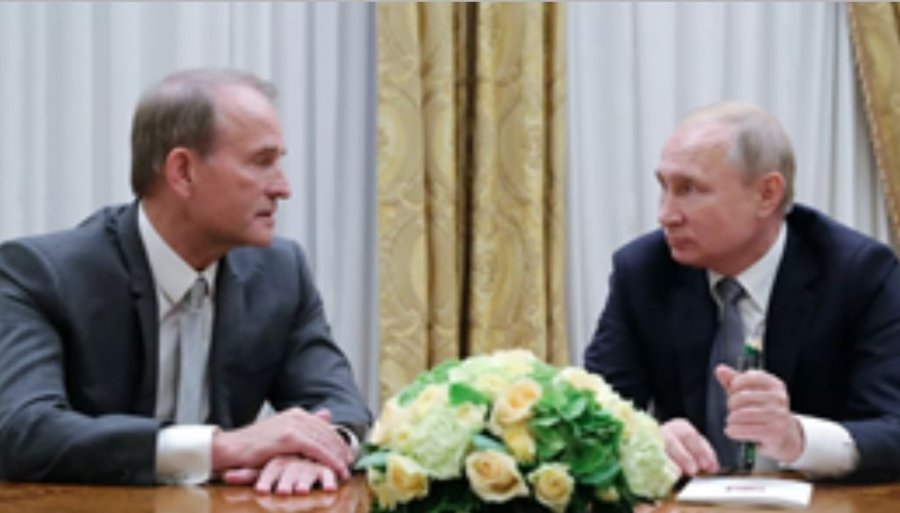 Viktor Medvedchuk during one of his many meetings with his friend, Russian President Vladimir Putin Photo Mikhail Klimentiev, RIA Novosti

Ukraine’s President Volodymyr Zelensky has enforced sanctions which the National Security and Defence Council voted on 19 February to impose on 19 companies and eight individuals, including controversial pro-Russian politician and MP Viktor Medvedchuk and his businesswoman wife, Oksana Marchenko.   The move comes just over two weeks after sanctions were imposed against Taras Kozak, a close associate of Medvedchuk and member of the pro-Russian parliamentary faction ‘Opposition Platform – For Life’ which Medvedchuk heads.  Those sanctions included the blocking of three major television channels which have been found to be responsible for over 50% of the disinformation and pro-Russian propaganda on Ukrainian television. While Medvedchuk denies any involvement, he is widely believed to be the real owner of the channels. The sanctions announced on 19 February also include Kozak’s common-law wife, Natalya Lavreniuk.

Medvedchuk and his wife are Ukrainian citizens, as is Kozak, and like with him, the new sanctions are over alleged financing of terrorism. Ukraine’s Law on Sanctions does not envisage any other exception from the general principle that sanctions cannot be applied against Ukrainian citizens.

National Security Council Secretary, Oleksiy Danilov announced the decision during a press briefing on 19 February.  He asserted that Ukraine’s Security Service [SBU] is carrying out a criminal investigation under Article 258 § 5 of Ukraine’s Criminal Code (financing terrorism).  From the point of view of inevitable challenges to the decision, this is important. While it would be unreasonable to expect measures aimed at fighting terrorism to be contingent upon a completed criminal investigation and court sentence, it looks very strange to allege criminal behaviour without initiating criminal proceedings. It is unclear what information has been provided by the SBU, however several Ukrainian journalist investigations have pointed to business activities, involving occupied Crimea or Donbas that would certainly warrant investigation.

At least one of the grounds for the sanctions is the Novoshakhtinsky oil refinery in the Rostov oblast in Russia, very close to the border with the so-called ‘Donetsk and Luhansk people’s republics’ [D/LPR].  This is registered under both Marchenko and Lavreniuk, and is known to provide diesel to occupied Donbas.  It also, reportedly, receives subsidies from the Russian state.

The new sanctions are for three years, and are imposed on all property owned by Medvedchuk, Marchenko and, presumably, the others.  This, however, will not lead to the blocking of another television channel, ‘1 + 1’, although Oksana Marchenko owns a share of the channel.  Danilov specifically stated that the channel would continue to broadcast, but Marchenko would be unable to sell or otherwise make use of her share.  The sanctions also include five planes which carried out flights between Kyiv and Moscow, as well as companies that serviced these planes.

These new sanctions, therefore, specifically target Medvedchuk and his wife, but do not have further implications for the media, like the blocking of ‘112.Ukraina’; NewsOne and ZiK, announced on 2 February.  At that stage, Kozak and the channels, together with Russian state media, made a lot of noise about supposed censorship.  This was rejected in at least two statements from Ukrainian media and other organizations, including the Independent Media Council, and, according to a survey carried out by ‘Rating’, the move was supported by 49% of respondents, with 41% against.

There were mixed reactions from the international community, with the US Embassy in Kyiv stating that “the United States supports Ukraine’s efforts yesterday to counter Russia’s malign influence, in line with Ukrainian law, in defense of its sovereignty and territorial integrity. “   The OSCE Representative for Freedom of the Media; the EU and Human Rights Watch all acknowledged Ukraine’s need to protect its territorial integrity and national security, but expressed concern about what they viewed as the cost to freedom and pluralism of the media.  Similar concerns were expressed in 2014 when Ukraine made any attempts to counter Russia’s virulent warmongering and, for example, refuse accreditation to Russian employees of state-controlled television who were very brazenly lying about the war in Donbas and using actors to, for example, claim that Ukrainian soldiers had ‘crucified’ the three-year-old son of a militant.

There are doubts in Ukraine as well about the move, although often not because of any perceived threat to freedom of speech or belief that the danger to media pluralism in blocking toxic propaganda channels is worse than the danger they pose..  The reasons concern the timing and possible political motives for the move and the lack of legal clarity on the subject of sanctions, who they are applied to and what grounds.  As, for example, Maxim Tymochko, a lawyer for the Ukrainian Helsinki Human Rights Union [UHHRU] stresses, sanctions are a political mechanism, but they must be framed within a legal context which complies with Ukraine’s international commitments and will not be found to have violated somebody’s rights by the European Court of Human Rights.

It was asserted at the time that the sanctions against Kozak were imposed that the grounds for this had been an SBU investigation which found that Kozak and the company Don Coal, associated with Medvedchuk, had, together with militants from the Russian proxy Donbas ‘republics’ organized the illegal sale of Donbas coal to companies in Russia.  This was merely reported in the media, with no official information about any criminal investigation or details.

The problem with the reasons is not that this is untrue, but that scrutiny of other Ukrainian oligarchs and politicians might well uncover similar deals. That is almost certainly true of Rinat Akhmetov who also owns Ukrainian media.

Volodymyr Yavorskyy, a human rights lawyer and member of the UHHRU Board, believes the moves against Kozak and the channels to be legitimate though he does, emphasise that the imposition of sanctions, a political instrument, does not cancel out the obligation to carry out a proper criminal investigation and prosecution.

He points out that the UN’s International Convention for the Suppression of the Financing of Terrorism does not, in fact, envisage sanctions against individuals, only against legal entities and other countries.

While pointing to the very different mechanisms provided by sanctions and legal liability, Yavorskyy clearly outlines reasons why there can be a burning need for sanctions to be imposed. As mentioned above, in fighting a very real danger, you do not have the luxury to wait until all evidence has been gathered, and all procedure, through to a court conviction, has been followed. Nor can information gathered and shared by security services necessarily be used as evidence in a trial. Sanctions are a temporary measure which can be applied swiftly.

Yavorskyy believes it to be evident that sanctions have been applied to protect national security and to fight terrorism.  He distinguishes between the sanctions against Kozak and the companies who are, after all, the ones suspected of sponsoring terrorism, and the television channels that are not, formally, the aim of the sanctions.

Yavorskyy stresses that there certainly need to be guarantees that such a method (i.e. the blocking of media via sanctions) is not used in future as a weapon for internal political struggles, but only in cases of real danger for the country.

Here, however, is the point of divergence, since Yavorskyy is not alone in perceiving this danger here and now.  As he puts it, “In the given case I see this danger since some political forces are truly financed by the state with whom we continue to be at war. If they get a majority in parliament, we risk losing all those achievements that we have gained over the last 10 years and returning to 2010”.  This is extremely dangerous, he adds, and stresses that there should now also be maximum mobilization by the enforcement bodies to uncover those channels by which the aggressor state is financing political projects in Ukraine “because, without this, we risk becoming a colony”.