Ukrainian hostages not forgotten but Russia understands only the language of ransoms and sanctionsEmpty promises from Ukraine’s leaders as release of Kremlin’s hostages ‘buried’The price of PACE capitulation to Russia: Soaring number of Crimean Tatar and other Ukrainian political prisoners#StayHome and Help Russia’s Ukrainian Political Prisoners held in dangerously unsanitary conditionsCrimean Tatars proved Crimea did not ask for Russian annexation – and have paid a huge priceIf Crimea is Ukraine, then take real measures to defend Crimean Tatar political prisonersSentsov: Whenever you think of friendship with Putin and Russia, remember the 13,000 Ukrainians killed and hundreds imprisonedBenefits of PACE ‘dialogue’? Dramatic increase in number of political prisoners in Russia & occupied CrimeaNo ‘normalization’ while Russia is still holding at least 87 Crimean Tatar and other Ukrainian political prisonersEditor on trial in Russian-occupied Crimea for UN report mentioning the Crimean Tatar Mejlis Ukrainian jailed in Russia’s revenge for Maidan punished because of back pain Russian invaders sentence elderly Ukrainian woman to 12 years on ‘treason’ charges Record prison sentence for Christian faith in Russian-occupied CrimeaFirst Russia came for the journalists. and now it"s hiding their trials Ukraine SBU officers on trial for the killing of 72-year-old Maidan activist Russia launches attack on Crimean Tatar elders for speaking out against repressionJudge who persecuted Maidan activists could get millions in ‘compensation’ following Supreme Court rulingRussian court removes Crimean Tatar political prisoners for speaking their native language Russia intensifies persecution for reading the Bible in occupied Crimea Ukraine’s most malicious miscarriages of justice
• Topics / Victims of political repression
• Topics / Human Rights Abuses in Russian-occupied Crimea 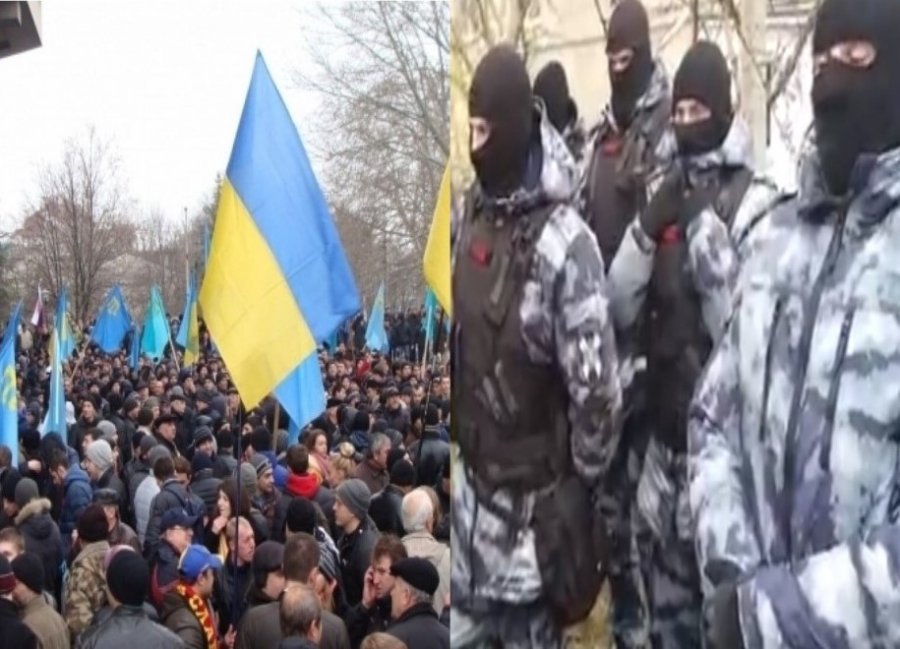 Demonstration on 26.02.2014, Russian operation against civic activists and journalists on 27.03.2019 (First from qha.com.ua, second from Crimean Solidarity)

On 26 February 2014, around 10 thousand Crimean Tatars and other Ukrainians foiled Russia’s attempt to seize control of Crimea without open deployment of soldiers.  Although unable to prevent Russia’s invasion, they did help ensure that the aggression was recognized as such, which Moscow has not forgiven.  Exactly seven years later, Russia is prosecuting Sevilya Omerova for a peaceful single-person picket calling for the release of her husband and father-in-law.  Enver Omerov and his son, Riza, are among at least 115 Ukrainian political prisoners, now held in occupied Crimea or Russia, most of whom are Crimean Tatars.

We now know that Russia’s massive military build-up and plans for seizure of power began earlier, on 20 February 2014, however the Kremlin was clearly hoping that an illegal vote in the Crimean parliament on changing Crimea’s status would conceal this first annexation of another European state’s sovereign territory since Adolf Hitler.  The Mejlis, or self-governing body, of the Crimean Tatar people learned of the plans by certain pro-Russian politicians, doubtless in collaboration with Russia’s FSB, and organized the huge demonstration in support of Ukrainian unity on 26 February.  The illegal vote could not take place, and at 4 a.m. on 27 February 2014, Russian soldiers without insignia began their seizure of power.  Moscow still maintained its pretence with a pseudo ‘referendum’, without any option for retaining the status quo, staged and used for the ‘formal’ annexation of Crimea on 18 March 2014.  The United Nations General Assembly and international community were never deceived, and sanctions were imposed.  In a crucial decision on 14 January this year, the European Court of Human Rights demolished Moscow’s false narrative about Crimeans having ‘voted to join’ Russia.  In finding most of Ukraine’s claims against Russia over human rights violations in occupied Crimea admissible, the Court accepted that Russia’s effective control over Ukrainian Crimea had begun on 27 February 2014.

On 26 February 2014 and since, Crimean Tatars have played an invaluable role in upholding Ukraine’s territorial integrity and insisting that the world does not forget that Crimea is Ukrainian.  They have also been the hardest hit by the relentless repression that Russia’s occupation brought to Crimea.

Almost all Crimean Tatar Mejlis leaders have been imprisoned, prosecuted or banned from their homeland (and then put ‘on trial’ in absentia, in the case of the world-renowned Mustafa Dzhemilev and Head of the Mejlis, Refat Chubarov).  The Mejlis itself has been banned, with Russia continuing to flout a binding order from the UN’s International Court of Justice to reinstate it issued in April 2017.

The imprisonment of Deputy Mejlis leader Akhtem Chiygoz and five other Crimean Tatars over the demonstration on 26 February 2014, and Russia’s rehash of these legally nonsensical charges in 2020, with its ‘trial’ in absentia of Refat Chubarov, make it clear that the main motive is revenge.  The prosecutions are overtly racist, since only Crimean Tatars have been targeted, although any trouble that day came from pro-Russian activists, most of whom seem to have been bussed in from Sevastopol.  They are also breathtakingly lawless since Russia is using its repressive legislation on supposed ‘mass riots’ over a largely peaceful demonstration which took place unequivocally on Ukrainian territory, under Ukrainian law.

Russia’s first political prisoner, Mykola Shyptur, remains imprisoned, along with well over 110 other Ukrainians.  The last release of political prisoners, including filmmaker Oleg Sentsov, was back in September 2019, and probably only happened because Russian President Vladimir Putin wanted to get Vladimir Tsemakh, a vital witness and possible suspect in the downing by a Russian Buk missile of Malaysian airliner MH17, away from Ukrainian and Dutch prosecutors.

While human rights NGOs and international bodies regularly point to shocking rights violations in occupied Crimea, more is needed to get the kind of publicity that will make the Kremlin understand that it loses more by not releasing the prisoners.

Many acts of solidarity and support need only the Internet, and messages via Twitter or social media can help to highlight the tragic plight of Crimean Tatar and other Ukrainian political prisoners serving up to 20-year sentences without any crime.

Critical hearings or sentences are expected next week against