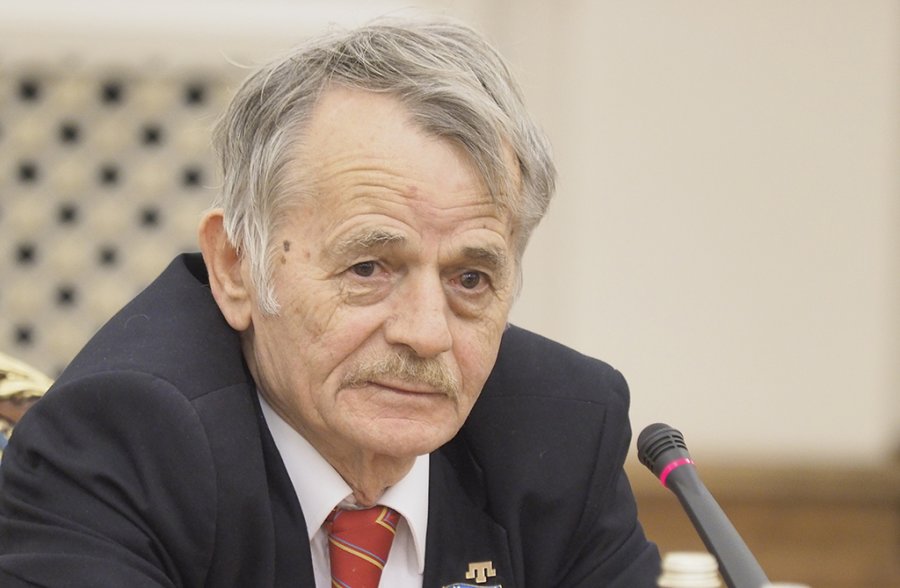 During the surreal ‘trial’ now underway in occupied Crimea of Mustafa Dzhemilev, it was learned that Russia had extended its ban on the veteran Crimean Tatar leader for a further 15 years, following the 5-year term it imposed after invading and annexing Dzhemilev’s homeland in 2014.  It is most unlikely that the 76-year-old Ukrainian MP and former leader of the Crimean Tatar Mejlis [representative assembly] has any wish to visit Russia, where he once spent 15 years in the Soviet political labour camps .  That, in any case, is not what Moscow fears, with this ban always about trying to minimize Dzhemilev’s moral and political influence in Crimea while it remains under Russian occupation.

The travesty now taking place at the Russian-controlled Armyansk City Court is, of course, in Dzhemilev’s absence.  He is represented by lawyer Nikolai Polozov who demonstrates at each hearing the absurdity of the charges and the shoddy ‘evidence’ presented to back them.  Following the 22nd hearing on 5 March 2021, Polozov reported the response from the Russian FSB to a request made by the court at the request of the defence. The FSB had been asked for a copy of the FSB decision banning Dzhemilev from entering the Russian Federation (and occupied Crimea).  This it failed to provide.

According to the document in question, the FSB had, on 19 April 2014, issued a decision which was even given a formal number (No. 140(3KC)13-1087.  This allegedly banned Dzhemilev from entering the Russian Federation for five years (until 19.04.2019).  Polozov notes that Dzhemilev was not shown this document, and it is not in the present case file, “i.e. neither the investigator nor the prosecutor have seen it either.  Effectively, Mustafa Dzhemilev is on trial accused of the crossing of the state border by a person who know he had been banned entry, on the basis of a document which nobody has set eyes on and whose existence is in serious doubt.”

The FSB also answered that the original ban had been extended on 5 March 2019 for a further 15 years (until 5 March 2034).  The FSB even gave a number to this alleged document, without giving any good reason for not presenting it.

As reported, on 22 April 2014 Mustafa Dzhemilev was handed a scrappy piece of paper as he crossed the administrative border from occupied Crimea to the Kherson oblast.  He had arrived in Crimea three days earlier, with his first act on reaching the then headquarters of the Mejlis in Simferopol being to order the reinstatement of the Ukrainian flag which had been removed after Russia’s land-grab.  The piece of paper has the number which the FSB cite, however it is unsigned and, for that reason alone, can hardly be considered proper notification, especially since over the following days there were claims, both from Moscow and from the occupation authorities, that the document was a fake.

It is possible that all of the above was because the Kremlin wanted to be able to back down if the international protest over the ban looked set to really hurt Russia. That would not, however, explain the present refusal to provide the documents, which they could easily back-date, falsely claiming that the document posted at the time had been tampered with.

It transpired very soon that it was Russia’s denials that were false, with Dzhemilev stopped on 2 May 2014 as he tried to travel to occupied Simferopol via Moscow. One of the charges that form the present pseudo-trial involves the events the following morning at the administrative border with Crimea, at Armyansk.  The Mejlis reacted to the enforcement of the ban on Mustafa Dzhemilev by calling on Crimean Tatars to come to Armyansk and accompany Dzhemilev to Simferopol. Around five thousand people came, but were confronted by huge contingents of Russian enforcement officers and soldiers and Dzhemilev finally decided to return to Kyiv, rather than risk bloodshed.

The events that day were used for the first wave of Russian arrests and political ‘trials’ in occupied Crimea.  Criminal charges were also later brought against Dzhemilev himself, with an order issued on 8 July 2015 for him to be placed on the ‘international wanted list’.  During the hearing on 5 March, Polozov drew the ‘court’s’ attention to the sheer absurdity of this warrant. “How can you declare a person wanted for failing to appear to your summons when, a year earlier, you issued an entry ban against him?  This absurdity did not bother the investigators”.

Nor did the gobbledygook of that original charge which stated that “carrying out his criminal intention, aimed at the unlawful crossing of the State border of the Russian Federation, while being fully aware of the established procedure for crossing the State border of the Russian Federation, acting deliberately in violation of the Federal Law of 15.08.1996 , realizing the public danger and unlawful nature of his actions, envisaging the inevitability of publicly dangerous consequences in the form of violation of the established order in the Russian Federation ….”.  Mustafa Dzhemilev had, in short, endeavoured to cross the administrative border from mainland Ukraine to Crimea.

Polozov has pointed out that Russian ‘investigators’ obviously all received instructions last year and simultaneously initiated criminal prosecutions against Dzhemilev; Refat Chubarov, Head of the Mejlis, and Lenur Islyamov.  The prosecutions were evidently in response to the Crimean Tatar leaders’ initiative for a March of Dignity from mainland Ukraine to Crimea.  Although the March of Dignity had to be postponed because of the pandemic, Russia and the puppet Crimean ‘authorities’ reacted very aggressively, issuing threats and then three surreal criminal ‘trials’.

Dzhemilev, world-renowned laureate of numerous international awards and twice nominated for the Nobel Peace Prize, is accused by Russia of having illegally crossed a non-existent ‘Russian state border’ in trying to return to his illegally occupied homeland.  In addition, he is facing charges pertaining to alleged actions that far precede Russia’s annexation.  All of this is under the control of Magomed Farmanovich Magamedov, from the Russian Investigative Committee’s ‘department for particularly important cases’.

There neither was, nor is, a ‘Russian state border’ to cross, since by Ukrainian and international law, backed by the UN General Assembly and all democratic countries, there was only the administrative border between the Kherson oblast and Crimea.  As explained above, Dzhemilev had also not been informed adequately of this (illegal) ban.

Russia’s ban was challenged through Russian courts, and is now awaiting examination by the European Court of Human Rights.