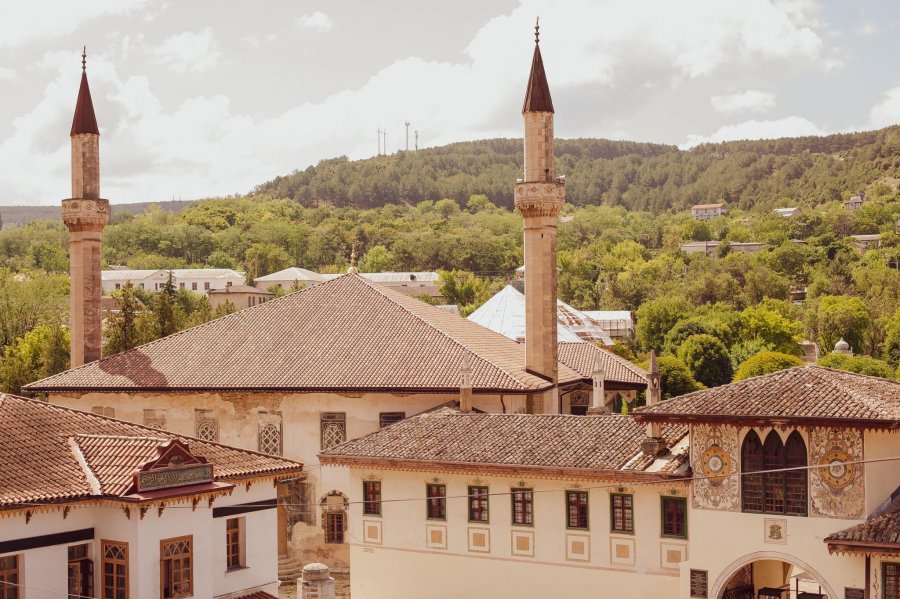 The Big Khan Mosque, with the factory-made tiles laid as part of Russia’s ’restoration’ work. Photo posted by Edem Dudakov

A photo showing Russia’s so-called ‘renovation’ of the Big Khan Mosque in occupied Crimea has confirmed the worst fears about the damage being caused the Khan’s Palace, or Hansaray, in Bakhchysarai.  This is a site of huge historical and cultural importance for Crimean Tatars, and for Ukraine as a whole, and its authenticity is being wantonly destroyed by the Russian occupiers..

Edem Dudakov, the former head of the Crimean Committee on Inter-Ethnic Relations and Deported Peoples, has made public a high-quality photo of the Khan’s Palace, which he assumes was taken by a drone.  You can clearly see the supposedly ‘restored’, but in fact new, roof of the Big Khan Mosque. This is now covered by factory-made Spanish tiles which look almost plastic in comparison to the authentic titles which, for the moment, still adorn adjacent buildings.  This change alone could destroy any chance, following de-occupation, of the Khan’s Palace being declared a UNESCO site of world heritage, as had seemed likely.  It is, however, only part of what many specialists condemn as Russia’s effective vandalism.  With respect to the tiles, there is likely to have been an element of plunder involved as well.  Considering the way workers have often treated parts of this historic complex like rubble, it was noticeable that all the original tiles were carefully packed and taken away, probably so that they could be used on sumptuous Crimean ‘villas’ for the Russian elite.

Dudakov points out that the geometry of the Mosque has also changed, with it appearing now to be 750-900 mm. higher.  Not only is this an unauthorized change to the complex, but it was probably unplanned since now the minarets seem too low in proportion to the height of the Mosque.   Dudakov’s main concern is that they have stripped the Big Khan Mosque “of elements representing the cultural heritage of our people”. Photo from the 1920s, with everything authentic

This process, which one commentator has called “vandalism, masking as restoration”, is set to continue, with the new contractors, who seem to have again been chosen without any competition, showing no sign of having professional expertise and experience of restoration work.

Although Russia’s illegal plans for ‘restoration’ work at the Khan’s Palace complex first became clear back in December 2016, it was just over a year later that the first photos emerged, making it clear just how barbaric this process was proving to be.

Any restoration work needed to be carried out by specialists after study of what was required, and with maximum use of the same materials and technology.  Instead, the work was passed to a construction firm called Kiramet, working for the Moscow-based Atta Group Architectural and Planning Holding as General Contractor. Neither had any experience of restoration work, and there was nothing to suggest that the mandatory expert assessment had been carried out.  Certainly attempts by lawyer Nikolai Polozov to obtain copies of the documentation for the alleged ‘restoration’ work were constantly rejected.

The Big Khan Mosque in 2011 Photo shared by Edem Dudakov

It was learned, late in 2018, that a St Petersburg company, called ‘Meander’, had won a tender for the work, as well as a suspicious number of other places of cultural heritage under Russian occupation.  It was suspected at the time that Meander was secretly owned by Vladimir Medinsky, then the Russian minister of culture, and that this was the reason for its success

Meander’s General Director and her former deputy were arrested in the autumn of 2020 on charges of embezzlement, and the Russian occupation regime began looking for new contractors.

Two new contractors were appointed in the middle of February. Both are Russian and neither appears to have any experience of restoration work.  Krym.Realii spoke with Shurki Khalilov, a restoration architect, who acknowledged that he had no knowledge of the companies’ work.  He was, however, fairly upbeat, asserting that, like anywhere in the world, there is a system for overseeing restoration work, with this in the first instance involving the issue of licences and permits.

Dudakov sees no such grounds for optimism.  The new company, which will be working on the Khan’s Palace, (‘Stroj Mir Rekonstruktsia) has average brigade size of 10 workers, and its main activity lies in construction of residential housing. Restoration is highly qualified and specialist work, having nothing in common with building new homes.  Dudakov is also more than sceptical about a system of licences providing guarantees of quality.  Such licences, he says, can be very easily purchased.

Clarification, he says, is also needed of the claim that there are no longer any firms in Crimea that can carry out restoration work at the Khan’s Palace.  The Ukrainian state enterprise carrying out restoration work had branches in Crimea which were responsible for the main sites of cultural heritage, including at the Khan’s Palace.  It was this structure, Dudakov notes, with all its vast experience and expertise, that was simply destroyed after 2014. Now Russian firms with no experience of work in a Mediterranean architectural milieu are being brought into Crimea, as though the total difference in conditions is no importance.  He is, therefore, fearful that these new Russian firms will also demonstrate the same cavalier attitude that has already led to the replacement of authentic tiles by a very poor factory-made ‘old-style’ imitation.

Dudakov points out that there are decent Russian firms doing very good restoration work. In building a church, he recalls, the correct wood was searched for throughout Russia, and then care was taken to properly prepare it.  He is convinced that it’s when the restoration is not “our sites” that the kind of shoddy barbarism seen at the Khan’s Palace is allowed.

There is, of course, another problem, which is that reputable firms do not want to fall under Ukrainian and international sanctions by working in occupied Crimea.

They should, indeed, worry about this, although better steps do need to be taken to ensure that any sanction violators are penalized.

Russia’s destruction of authentic sites of cultural heritage under the guise of ‘restoration’ are undoubtedly in violation, not only of Ukrainian legislation, but of international law.

In May 2020, Ukraine’s Verkhovna Rada finally ratified the Second Protocol to the Hague Convention of 1954 for the Protection of Cultural Property in the Event of Armed Conflict 1999,   This means that Ukraine can approach UNESCO for technical assistance in protecting places of cultural heritage and also has further instruments for organizing the monitoring and protection of such places on occupied territory.

Article 9 of the Second Protocol expressly prohibits “a.  any illicit export, other removal or transfer of ownership of cultural property; b. any archaeological excavation, save where this is strictly required to safeguard, record or preserve cultural property; c. any alteration to, or change of use of, cultural property which is intended to conceal or destroy cultural, historical or scientific evidence.”   There is also the possibility of enhanced protection as long as the sites are considered “cultural heritage of the greatest importance for humanity”.

In reporting this important, if belated, step, Elmira Ablyalimova, the former Director of the Bakhchysarai Historical, Cultural and Archaeological Museum-Reserve, noted that Article 9 is the only norm in international legal treaties which directly prohibits deliberate alteration of a site to destroy its real historical value.  She stressed that this is not enough by itself, and Ukraine should now introduce legislation to criminalize violations prohibited by the Second Protocol.  This will make it possible to hold proper court proceedings and to use these as proof of Russian violations of Ukraine’s cultural heritage at international political and court levels.