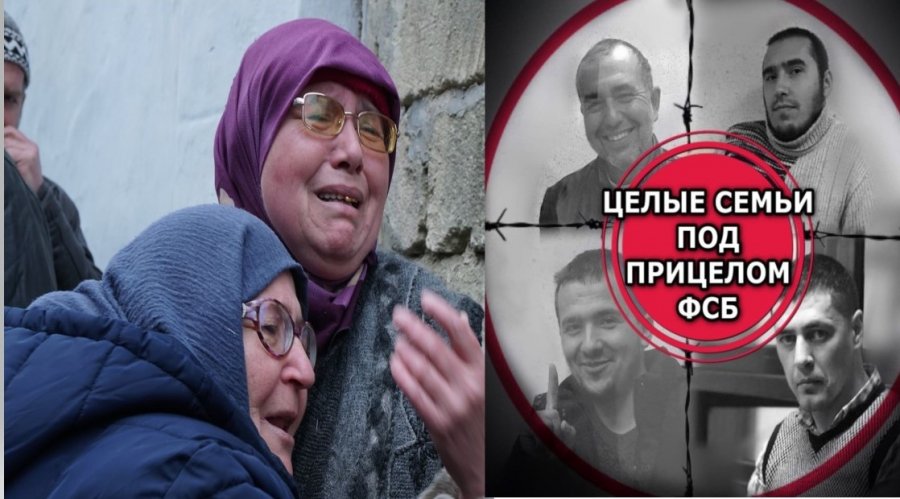 Renowned Crimean Tatar historian Shurki Seitumerov has had two sons taken from him since Russia’s invasion and annexation of Crimea.  His wife’s brother was also seized in the same ‘operation’ targeting men for their religious and political views and for their civic activism in support of political prisoners.  This is one of four ‘bulk’ arrests thus far in occupied Crimea which enable the FSB to claim ‘good statistics’ on fighting ‘terrorism’ while terrorising Crimean Tatar families.

The sheer frequency of these conveyor belt arrests and trials of Crimean Tatars should not make us forget the shocking cynicism behind the charges.  Men peacefully bringing up their families and practising their faith, who have never had any trouble with the law, are seized and forced to the ground, often in front of their terrified children, by the armed and masked enforcement officers who burst into their homes at dawn.  They are charged under the norms on ‘terrorism’ in Russia’s criminal code, although not one of the 80 or more searches has ever found – or looked for - any weapons or explosives.  The only ‘prohibited items’ actually sought are religious books, though ‘sought’ is increasingly the wrong word, as the FSB very often pretend to find books that they brought with them.  This is one of the reasons why lawyers are invariably prevented from being present during these pseudo-searches.

It was on 11 March 2020 that the Seitumerov family were targeted in a third wave of arrests of Crimean Tatars, most of them civic journalists or activists, from Bakhchysarai.  Seven homes were subjected to early-morning raids, with 32-year-old Seitumer Seitumerov and his 28-year-old brother Osman Seitumerov arrested, together with their uncle, Rustem Seytmemetov (47) and 36-year-old Amet Suleimanov.  Both of the brothers had attended political trials, sent food parcels to political prisoners and helped their families.  Suleimanov is a Crimean Solidarity activist and journalist, who streamed information about arrests and political trials onto the Internet.   An armed search was also carried out of another Crimean Solidarity civic journalist Seydamet Mustafayev.  He was not home, so the FSB took his elderly father, Enver Mustafayev away for several hours.  The FSB also carried out a search of the home of another Seitumer Seitumerov, a former Crimean Solidarity activist who left for mainland Ukraine a while ago and is now a presenter on TV ATR.

The brothers and their uncle, as well as Suleimanov, are all charged with ‘involvement’ in Hizb ut-Tahrir, a peaceful Muslim party which is legal in Ukraine and most other countries.  No adequate reason has ever been provided for the highly secretive ruling by Russia’s Supreme Court in 2003 which labelled Hizb ut-Tahrir ‘terrorist’, and the authoritative Memorial Human Rights Centre recognizes all those imprisoned on such charges as political prisoners.  Vitaly Ponomaryov from Memorial believes that the ruling was aimed at enabling the Russian authorities to send refugees back to Uzbekistan where they faced religious persecution.

The Supreme Court ruling is now illegally used in occupied Crimea, most often as a weapon against men who have reacted to the mounting repression by involvement in civic activism and journalism.  The Seitumerov brothers, Seytmemetov and Suleimanov are all charged with ‘involvement’ in a Hizb ut-Tahrir group, under Article 205.5 § 2  of Russia’s criminal code which carries a sentence of from 10 to 20 years’ imprisonment.  Fortunately, this case is slightly different from the FSB template prosecutions in that the only person charged with the more serious Article 205.5 § 1 (‘organizing a Hizb ut-Tahrir group’) is ATR journalist, Seitumerov, who is safely in mainland Ukraine.

The other deviation from the ‘norm’ in these cases is that one of the four men – Amet Suleimanov – was placed under house arrest, rather than in detention. This recognition that detention, given Suleimanov’s chronic rheumatic heart disease, aortic insufficiency, coronary artery disease and other conditions, would lead to his death within days, has not prompted the FSB to withdraw the absurd ‘terrorism’ charges.  In fact, even house arrest is placing Suleimanov’s life in real danger since he urgently needs an operation to replace a faulty heart valve.

The trial is now underway in Russia, at the same Southern District Military Court in Rostov-on-Don which has been used for most of Russia’s politically-motivated trials of Ukrainians over the past seven years.

It should be noted that all those ‘investigators’; prosecutors and judges involved in the case are aware that they are taking part in the trial of innocent men.  The case is, after all, based on the ‘testimony’ of secret witnesses who have already taken part in other political trials and whose illegally position in Crimea makes it easy for the FSB to put pressure on them.

The European Court of Human Rights has already found that Russia’s dependence on such testimony is a violation of the right to a fair trial.  In occupied Crimea, the situation is especially shocking since whole cases effectively hinge on such ‘testimony’, with no other evidence to back the prosecution’s position.

There are two illicitly-made recordings of conversations in a Mosque. One is on a religious theme, regarding Judgement Day and people’s responsibility for their actions. The second touches on history, and specifically, the act of genocide against the Crimean Tatar people in 1944, i.e. the Deportation., and how nobody has been held to account.

Such conversations were then passed to FSB-loyal ‘linguistic experts’ who, in this case, added words that were not actually said, and gave the  men’s utterances a negative interpretation that suited the prosecution, but was not based on what they had heard.  During the first hearing, the men all pointed to these and other flaws in the ‘evidence’, as well as to the absurdly vague nature of the indictment.  Seitumer Seitumerov, for example, called the charges against him incomprehensible, and noted how often in the text of the indictment the prosecution talks about places, times and people “not identified by the investigators”.

It is not clear at this stage whether the court will take ‘prohibited books’ into account, however Suleimanov’s wife clearly stated on the day of the search that the FSB had planted books, hiding them on the desk where their children study.

There is essentially no way that this could be a fair trial.  Russia is in breach of international law by applying its legislation on occupied territory and imprisoning the men for alleged involvement in an organization that functions freely in Ukraine). The charges are based solely on an unexplained Supreme Court ruling, and not on any actual ‘terrorist’ behaviour, even according to Russia’s definition of terrorism.

All of this is standardly ignored by the judges, as is the lack of any justification for concealing the identity of the so-called ‘secret witnesses’ who, aside from the FSB, are the only people who testify against the defendants.

It turns out that over 80 years after Stalin’s Terror, it remains easy enough for the regime to find ‘investigators’, prosecutors and ‘judges’ willing to take part in persecution of innocent men.  And, like in Stalin’s time, in destroying whole families.

On the first anniversary of the men’s arrest, Lutfiye Zudiyeva, Crimean Solidarity Coordinator, wrote that all of those who were near on that terrible day in March 2020 remember the horror and pain on the face of Lilya Seitumerova, a mother who has had two sons taken from her.  And how the father of the two men, historian Shurki Seitumerov, spoke of how the stories he had heard from his mother and grandmother about the repression against previous generations had now come to life in some terrible way before his very eyes.