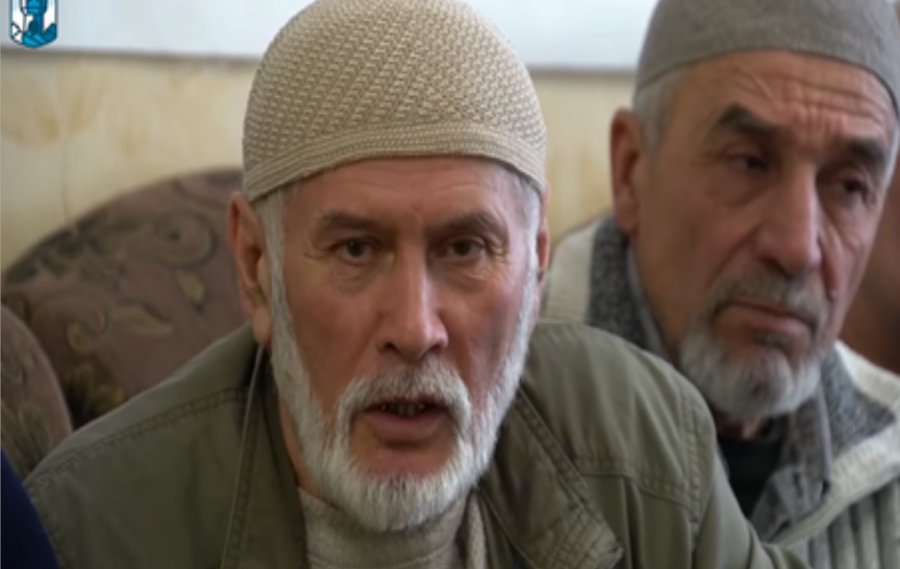 The Russian occupation authorities have claimed that words like ‘intimidation’ and ‘injustice’ are ‘public calls to extremist activity’ and have issued a formal warning against one of the Crimean Tatar elders who spoke out in defence of political prisoners.  Some of the elders survived the Deportation and / or are veterans of the Crimean Tatar national movement, and are unlikely to be intimidated into silence, but that is doubtless the occupation regime’s intention.

Akhmadzhon Kadyrov is one of the elders from the Nizhnegorsk District in Crimea who recorded an appeal on 9 March, with this posted on the Internet by Crimean Solidarity.  With a huge banner in the background stating “Crimean Tatars are not terrorists!”, several of the men, including Akhmadzhon Kadyrov speak of the terror and persecution that Crimean Tatars have been subjected to over the past seven years.  The appeal is addressed to fellow Crimean Tatars, fellow Muslims, and says the following, either in Crimean Tatar, with Russian sub-titles, or, in Kadyrov’s case in Russian.

“We have gathered here to tell people about what is happening in Crimea.  You have all seen the events that have been taking place since 2014, the persecution, when the best of our people, devout men are taken away.  When early in the morning, they burst into homes where children are still asleep, terrify the children and take our lads far away from their homes, hold court hearings and pass huge sentences.

If you remember, in 1990-1991, when we all returned to our native land, to Crimea, we showed unity and solidarity.  Today we need that unity and even more than that as the Prophet (peace to Him and Allah’s blessing!) said: “He is not one of us if, waking up in the morning, he does not think of his brothers”   <>  We must not stand on the side line in the face of the lawlessness being committed.  We must all help those who have encountered injustice, help their families and children, who have been left without their fathers, their grandfathers.  We must attend court hearings and show support for these men, as they are a part of our people.   These are our children, our guys, many of them we know.  There are no bad people among them.  There was never any ‘terrorism’ among our people, and with Allah’s will, there never will be.  Our people have always waged a peaceful struggle, without terrorism and extremism.  They are trying to intimidate us.

The last searches were at 4 a.m.  Think about the time, about our history  Does 4 a.m. say nothing to you?   On 18 May 1944, at 4 a.m. our grandmothers and grandfathers, our parents, our people were deported in cattle wagons.  Our elders and we struggled to return to our native land, and Allah gave us this opportunity.  At that time, we demonstrated unity.   Dear fellow believers, do not be afraid.  Visit court hearings,  We must express our views, our opposition to what is happening. < [quote from the Quran] We are a Muslim people and we must help one another, all of those who are facing repression.  <[another quote from the Quran] >  There is no terrorism among our people, and we must all understand that well.  They want to assimilate us, make us the way they want, and we must beware of this.  Let us demonstrate our unity and, together, countering this repression, put an end to it.  We must demand this as tomorrow it could affect any one of us, and turn out worse.  We must not stand on the side-line. “

Akhmadzhon Kadyrov then speaks in Russian, largely repeating the same point about the “repression against my people since 2014, labelling us ‘terrorists’ and ‘extremists’.  He also speaks of those who burst into homes, terrifying children, women, the elderly, paying no heed to people’s age.  He speaks of how they lived for 30 years without any of these claims of ‘terrorism’ and ‘extremism, without the lawless excesses against them.  His words are emotional, but reflect only the reality described in countless documents by human rights organizations, and in resolutions from the UN General Assembly, OSCE; the EU and all democratic states.

It was in the above video address that the occupation prosecutor’s office in the Nizhnegorsk Region found ‘calls to carry out extremist activities’.  Kadyrov received a warning “about the inadmissibility of breaking the law”.

The document states that a check was carried out of the appeal and that the law enforcement system found “repeated, unwarranted comments about the unlawfulness of actions by the court bodies”.  The occupation ‘enforcement bodies’ were aggrieved, it transpires, by terms like “repression’; ‘intimidation’; ‘lawlessness’’ ‘injustice’ and ‘attempts to intimidate’.   They claim that calls to “help all who are facing repression” shows “a negative attitude to law enforcement and judicial employees”.

Kadyrov is not just ‘warned’ of the inadmissibility of ‘breaking the law’, but positively threatened with liability if he does not heed the so-called ‘recommendations’ in this warning.

There are, unfortunately, likely to be many more such threats as moving appeals have thus far been issued by around twenty groups of Crimean Tatar elders.

It should be stressed that these appeals require courage since the threats are by no means empty.  The Russian occupation regime has paid absolutely no heed to age when carrying out arrests.  On 23 November 2017, 83-year-old veteran of the Crimean Tatar national movement, Vedzhie Kashka, was effectively killed through an excessively violent attempt to arrest her on preposterous charges.  Server Karametov was jailed for ten days on a grotesque charge of ‘resisting the police’, despite his age (76) and very poor health.  58-year-old Azamat Eyupov took part, together with Akhmadzhon Kadyrov, in the peaceful protest by Crimean Tatars on Red Square in Moscow in July 2019 in protest against horrific sentences passed on four Crimean Tatars from Bakhchysarai on fabricated ‘terrorism’ charges.  Eyupov is now imprisoned, facing a 10-20-year sentence,  after Russia’s latest armed and masked offensive against Crimean Tatar activists and their families on 17 February 2021.