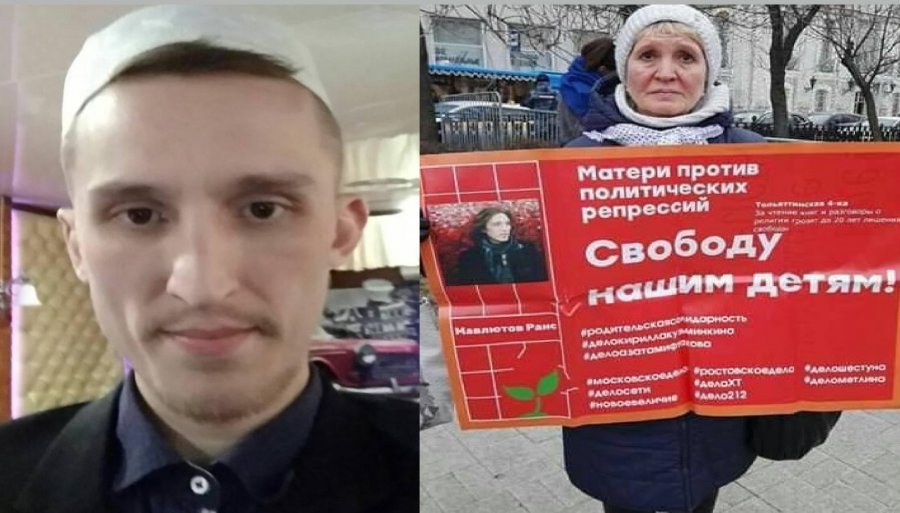 Rayis Mavliutov Photo from his mother’s Facebook page, Nelya Mavliutova with a banner reading Mothers against political repression. Free our children. The photo is of her jazz, books and football-loving son whom Russia has sentenced to 23 YEARS

A Russian court has sentenced 31-year-old Rayis Mavliutov to 23 years’ harsh regime imprisonment despite his having committed no recognizable crime.  As has been the case in all analogous trials involving Muslims and Jehovah’s Witnesses from occupied Crimea, the ‘indictment’ pointed only to legal activities normal for any devout believer.  This has been the case since Russia began such gravely flawed trials, with the main ominous difference lying in ever-increasing sentences.

Nelya Mavliutova has shared photos of her son whom she describes as an ordinary young guy of his generation.  He graduated from a theatrical college in Kazan and also entered a music college.  He likes singing and has a particular love for jazz, but he’s also a football player and fan, with his favourite team Barcelona.  He is married but the couple had not begun a family when, on 23 September 2019, he was arrested, the latest victim of Russia’s conveyor belt persecution of Muslims seen as being too independent.  He has long been recognized by the authoritative Memorial Human Rights Centre as a political prisoner.

Like over 80 Crimean Tatar and other Ukrainian Muslims arrested in occupied Crimea, Mavliutov was charged under Russia’s ‘terrorism’ legislation.  This may sound alarming, however the charges are based solely on a highly secretive and flawed Russian Supreme Court ruling in 2003.  This labelled the peaceful Muslim organization Hizb ut-Tahrir ‘terrorist’, without providing any sensible explanation.  The secrecy with which it acted, leaving neither Hizb ut-Tahrir itself or human rights NGOs any possibility of challenging the ruling until it was too late, only confirms the suspicion expressed by Vitaly Ponomaryov from Memorial HRC that the move was politically motivated.  He believes that Russia wanted to be able to forcibly return Uzbek refugees to Uzbekistan.   Call their organization ‘terrorist’ and nobody will argue against their deportation to a country where they are, in fact, facing religious persecution.

Four such charges increase the sentence, but do not make it any the more justified.  Memorial HRC has studied the indictment and explains just what the four articles translate into.

The prosecution accused Mavliutov of having visited Hizb ut-Tahrir meetings in Kazan from December 2013 to the end of May 2015.  There he allegedly “gained skills and special knowledge enabling him to act on the religious feelings of believers, lead them into religious error, explain and justify the activities of Hizb ut-Tahrir in the Russian Federation.”  He is also supposed to have tried to recruit potential members of Hizb ut-Tahrir, as well as strengthening the unity of members of the group via something described as “ideological and psychological working”.

Such charges might at least be understandable if the organization in question had any links with violence or terrorism.  Hizb ut-Tahrir has none.  In a study entitled Transnational Islam in Russia and Crimea, the renowned British institute Chatham House points out that Hizb ut-Tahrir is one of the organizations that “avoid violent means and instead may focus on social work, education and dialogue initiatives”.

The charge of being an ‘organizer’ makes a sentence of 18 years or more almost guaranteed, yet it was based solely on the claim that from the end of May 2015 until his arrest, Mavliutov had become one of the leaders of the alleged Hizb ut-Tahrir group.

As for ‘financing terrorism’, Mavliutov was supposed to have “on a regular basis carried out monthly collections of no less than 200 roubles from each person”.  The amount is extremely small and appears to have been for circulating information (possibly paper, etc. for photocopying) or for helping people imprisoned on similar charges.  Memorial HRC notes that the prosecution claimed that the ‘financing of terrorism’ charge was proven by the testimony of witnesses, although there was only one case where Mavliutov’s name was even mentioned.

The last charge of ‘public justification of terrorism’ pertained to ‘utterances’ that Mavliutov posted on the social networks VKontakte and Facebook which the FSB clearly handed to their loyal ‘linguistic experts’.  The latter have always been willing to oblige in Crimean cases, and here also claimed that the utterances “contain justification of the activities of Hizb ut-Tahrir  members”.

Memorial notes that the posts cited in the indictment “do not contain any justification of terrorism.  In fact, they refer to the persecution of other people because of their involvement in Hizb ut-Tahrir being unwarranted, as too is the labelling of the organization as terrorist.”  The posts also point out that comparisons of Hizb ut-Tahrir with the so-called ‘Islamic State’ are wrong, since the two organization’s ideological positions are very different and there is nothing in common between them.

The prosecution had demanded 24 years, with this clearly because there were four charges, not because of any proven danger or criminal activity.  On 22 April, the Central District Military Court in Yekaterinburg sentenced Rayis Mavliutov to 23 years in a harsh regime prison colony, with the first four years in a ‘prison’, the harshest of all.