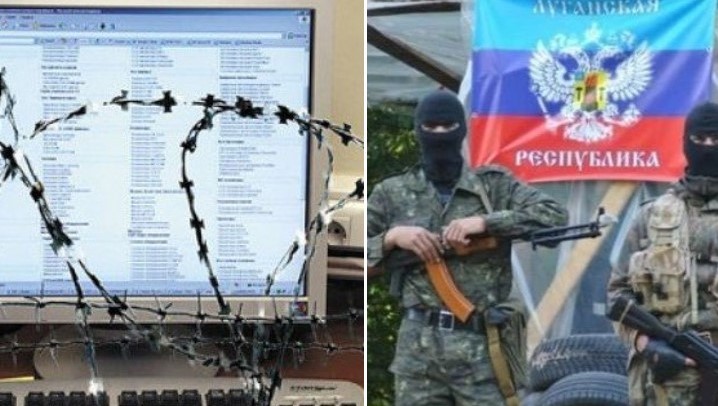 The self-proclaimed ‘Donetsk people’s republic’ [‘DPR’] have introduced criminal liability for what they refer to as ‘defamation via the Internet’.  This formal move here, and earlier in the equally Russian-controlled ‘Luhansk people’s republic’, is doubtless aimed at sending a chilling message of the likely consequences of criticizing those in power.  In fact, however, the penalties envisaged are far lower than the 13-15-year sentences already passed against Ukrainians for comments on Twitter or other social media.

The unrecognized Donetsk ‘republic’s’ essentially unelected ‘parliament’ voted on 30 April to add a second part to article 132 of the so-called DPR criminal code imposing criminal liability “for defamation carried out publicly with the use of information and telecommunication networks, including the Internet”.  The proposed sanctions range from a potentially steep fine to 240 hours community work.

A month earlier, on 25 March, ‘LPR’ essentially copied the Russian criminal code verbatim with the amendments to article 139 of its criminal code saying that it refers to “circulating knowingly false information denigrating the honour and dignity of another person or undermining his reputation.”

Unlike Russia and its proxy ‘republics’, Ukraine has only civil liability for defamation, with the relevant comments needing to be proven in court to be false.  While at least ‘LPR’ speaks of ‘knowingly false’ statements, there is essentially no chance of proving this in the so-called LPR or DPR courts.

The innovations may, in fact, be simply about slavishly following Russia, since the proxy ‘republics’ and their so-called ‘ministries of state security’ have already demonstrated the methods used against those who dare to criticize them or who express pro-Ukrainian views.

On 23 April 2021, a women identified only as O.M. Fomenko was sentenced to two and a half years’ imprisonment for what the ‘DPR prosecutor general’s office’ called “calls to extremism on social media”.

The report states that a ‘court’ in Donetsk found Fomenko guilty of ‘public calls to carry out extremist activities’ (article 325 § 1); public calls to action aimed at violating the territorial integrity of DPR (article 326 § 2)  and ‘inciting enmity’ (article 328 § 1).”  Fomenko is claimed to have, from August 2018 to July 2019 posted publications on the Internet with statements “aimed at arousing racial, national and religious enmity, as well as at the violent change to the constitutional order and DPR security”.

She would thus seem to have been imprisoned for two and a half years for expressing opposition to the so-called ‘republic’ and, perhaps, to ‘Russian world’ ideology.

That sentence us shocking, but very mild in comparison with some of those imposed by the ‘republics’.   ‘LPR’ blogger Edward Nedelyaev was sentenced to 14 years for ‘spreading negative information’.  ‘DPR’ imprisoned Donetsk journalist and writer Stanislav Aseyev for 31 months, most of them in the notorious Izolyatsia secret prison.

Nedelyaev and Aseyev are among the lucky ones who were finally released in an exchange of prisoners.  Among the 250 or more hostages, still held in ‘DPR/LPR’ are several men or women who were seized because of comments made on Twitter.

Marina Yurchak is a 41-year-old environmental chemist, who has been held hostage in ‘DPR’ since 9 November 2017.  Since this included almost a year at Izolyatsia, it is near certain that she was severely tortured.  All of this, however, was only discovered later.  At the time, she simply disappeared, with her parents in anguish, having no idea what had happened to her.

The 15-year sentence imposed on 26 March 2020 was for so-called ‘spying,’ however she is believed to have also been accused of ‘insulting’ top militants, whose vehicles she refers to as ‘orc-mobiles’.  From back in 2014, Yurchak was active on Twitter, making no secret of her pro-Ukrainian views and writing honestly about what she saw.  She openly wrote, for example, about where the shelling was coming from and the direction in which military technology was being transported.

Almost all that we know about him and about Yuri Shapovalov comes from videoed ‘confessions’.  Although Podvezko’s 14-year sentence was also for supposed ‘spying for Ukraine’s Security Service [SBU], the 31-year-old seems to have been charged over alleged communications with a Twitter user whom both Russia and its proxy ‘republics’ do have cause to hate.  Necro Mancer @666_mancer is one of the citizen journalists who has provided invaluable information about Russian military and pro-Russian losses in occupied Donbas; military movements, etc.   He seemingly lives in Donetsk and began documenting the military movements and military losses that Russia has tried very hard to conceal from the events of April 2014.  It was then that, having failed to stir up local uprisings, Russia sent in ‘former’ FSB officer Igor Girkin and around 50 heavily armed men who seized control of Sloviansk in the Donetsk oblast on 12 April.  In their ‘prosecution’ of Podvezko, the DPR militants claim that Necro Mancer works for the SBU and that Podvezko passed him information.

The 56-year-old neuropathologist was ‘sentenced’ in DPR in April 2020 to 13 years’ maximum security imprisonment for posts on Twitter which were claimed to “destabilize the situation” in the unrecognized ‘republic’.  Shapovalov has been imprisoned for over three years, and is known to have spent some of this time being tortured at the Izolyatsia secret prison.  It was only from the testimony of two journalists released in December 2019 (Aseyev and Oleh Halaziuk) that his whereabouts were known after the original militant report and videoed ‘confession’ in March 2018 (when he had already been in captivity for some time).  Although Shapovalov’s Twitter account was clearly hijacked by the militants following his seizure, the tweets from before January 2018 can still be seen here at Залишенець Донецький @relictDon.  They show a person with clear pro-Ukrainian views and a deep antagonism to ‘Russian world’ ideology and the devastating impact this has had on Donetsk.