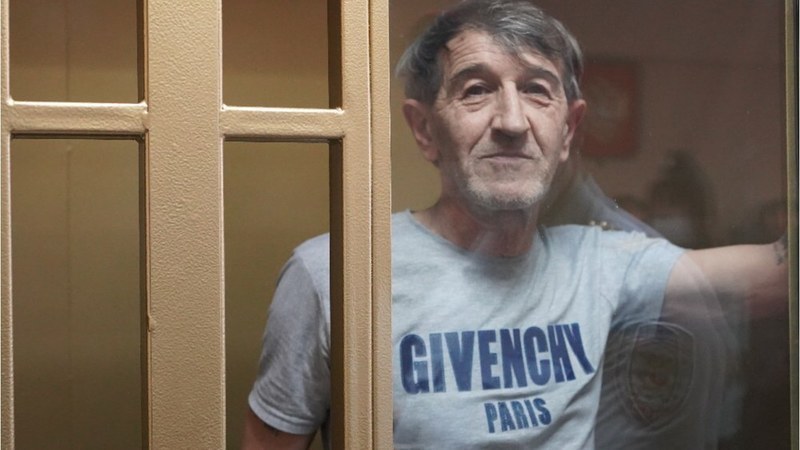 Russia’s military court of appeal has upheld the five-year sentence passed on 63-year-old Oleh Prykhodko, a Ukrainian activist from occupied Crimea.  The charges were preposterous, the falsification of evidence flagrant and Prykhodko should certainly have been acquitted.  The prosecutor had, however, repeated his demand for an 11-year sentence and two rejections serve as effective acknowledgement of the gravely flawed nature of this case.

The ‘hearing’ took place on 17 May at the court in Vlasikha (Moscow region), with Prykhodko himself seemingly able to take part by video link from the prison in Rostov, and his lawyer, Nazim Sheikhmambet from Simferopol.  The appeal was against the sentence passed on 3 March 2021 by presiding ‘judge’ Alexei Abdulmazhitovich Magomadov; together with Kyrill Nikolayevich Krivtsov and Sergei Fedorovich Yarosh from the Southern District Military Court in Rostov-on-Don.  Prykhodko was sentenced to five years’ harsh regime imprisonment, with the first year in a prison, the worst of all Russian penal institutions, and a prohibitive 110 thousand rouble fine. While the defence called for a complete acquittal, the prosecutor demanded an 11-year sentence with the first three years in a prison – something that a 63-year-old in poor health would be most unlikely to survive.   Despite overwhelming evidence of planted and / or doctored ‘proof’, judge Sergei Viacheslavovich Vinnik dismissed both challenges to the sentence.  The defence had earlier stated that they were collecting material for an application to the European Court of Human Rights which will almost certainly take a different stand.

Prykhodko was arrested on 9 October 2019, a month after Moscow released 35 Ukrainian political prisoners and POWs, mainly in order to get MH17 witness (and possible suspect) Vladimir Tsemakh out of the reach of the Ukrainian and Dutch prosecutors.  Prykhodko’s case is a near repeat of that against one of the Ukrainians from Crimea, Volodymyr Balukh.  Both Prykhodko and Balukh had openly flown the Ukrainian flag and demonstrated their peaceful opposition to Russian occupation.  Both had suffered constant harassment from the occupation regime and administrative prosecutions before FSB officers turned up at their homes and claimed to have ‘found’ ammunition, in Balukh’s case, or  ‘explosives’, in Prykhodko’s.  In the subsequent ‘trials’, the defence presented compelling evidence that the cases had been fabricated, which the ‘judges’ ignored.

The difference lay in the fact that Prykhodko was charged under Russia’s flawed ‘terrorism’ legislation with the sentences potentially very high.

In declaring Prykhodko a political prisoner, the renowned Memorial Human Rights Centre called the prosecution falsified and lacking in any elements of a crime. It was evident that Prykhodko had been arrested and tried purely because of his pro-Ukrainian views and opposition to Russia’s occupation of Crimea.

According to the sentence, Prykhodko was supposed to have planned to blow up the Saki Administration building and to set fire to the Russian General Consulate in Lviv, and these ‘crimes’ had not been carried out due to circumstances beyond Prykhodko’s control.  He had allegedly made one explosive device, and begun another; and had also purchased and kept explosive substances at his home.

Prykhodko’s open opposition to Russian occupation had already led to earlier administrative prosecutions and he had every reason to except FSB visitations and searches, with this just one of the reasons why it was inconceivable that he would have held a bucket full of explosives in his garage.  Another was that he is a blacksmith and metalworker by profession, who used both garages for welding and soldering work.  It would have been suicidal to keep flammable substances near his equipment.

During the evening after Prykhodko’s arrest, a person claiming to be a doctor took a biological sample from Prykhodko’s mouth.  This was illegal, without a lawyer present, and makes the claim that DNA was found on the alleged ‘evidence’ highly suspect.

If the first charge with planning to blow up an official building in Saki (occupied Crimea) already seemed implausible, the second charge was quite surreal.  The FSB claimed that Prykhodko had planned to set fire to the Russian general consulate building in Lviv, Western Ukraine, with the alleged ‘proof’ of this lying in a telephone and a memory stick. He was alleged to have discussed, via telephone and text messages, these ‘plans’.  There is considerable testimony from friends and colleagues confirming that Prykhodko had extremely basic knowledge of how to use either a smartphone or a computer, and would certainly have had no idea how to send a text message or use a memory stick.

The above is by no means an exhaustive list of the compelling grounds for dismissing all the charges against Oleh Prykhodko.

The address is likely to change shortly but will be updated here.  Letters send an important message, telling him that he is not forgotten, while also showing Moscow that the ‘trial’ is being followed. Letters need to be in Russian, and on ‘safe’ subjects.