Veto Crimea bill or shame UkrainePresident vetoes flawed displaced persons lawFurther calls for veto of internally displaced persons lawMysterious money supposedly allocated for refugeesKHPG statement on the adoption of a law on internally displaced personsLaw on Internally Displaced people comes in for criticismHelp for Forcibly Displaced PeopleNo mechanisms in place for dealing with refugees from the CrimeaCrimean Tatars and others face citizenship dilemmaRussian methods: Calls for Crimea’s return to Ukraine could get you imprisonedMGIMO historian fired for article comparing Crimean annexation to Hitler’s AnschlussInformation channels at warDonetsk Front in Putin’s Dirty WarScurrilous rumours used to spread fear and distrust in Eastern oblastsAutoMaidan activist shot at near ChongarRussian troops already deployed in mainland UkraineThe Crimea is our Home: Get your troops out!Crimean "referendum" a grotesque farceCrimean Tatars call on all Crimeans to boycott "referendum"Avoiding Ukraine’s language minefields
• Topics / Prohibition of discrimination
• Topics / Human Rights Abuses in Russian-occupied Crimea 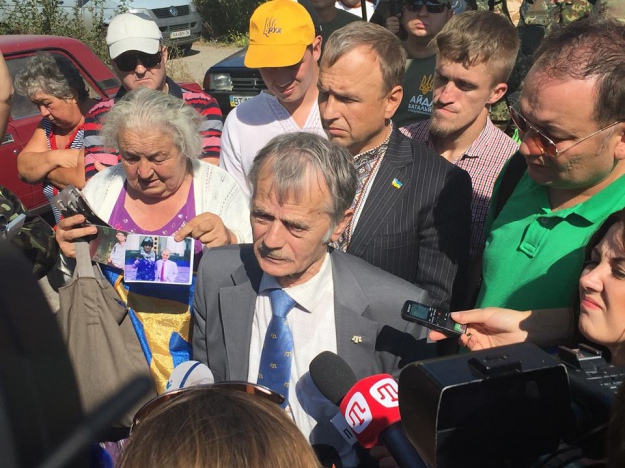 Three draft bills have been tabled in Ukraine’s Verkhovna Rada to abolish the so-called ‘Crimea’ Free Economic Zone that has, since 2014, discriminated against Ukrainians from Crimea while also providing mechanisms for collaboration with the Russian occupation regime.  Critics of the law, like prominent Crimean journalist Valentina Samar, are convinced that the law was pushed through to serve big business, and it seems very likely that moves to remove it will encounter stiff resistance.

The bills were registered on 18 May, the anniversary of the 1944 Deportation of the Crimean Tatar people and a day that for very many Crimean Tatars is now associated with the repression unleashed since Russia’s invasion in 2014.  The timing was quite deliberate with Rustem Umerov, Co-Head of the inter-factional Crimean Platform and one of the bills’ authors saying that Ukraine had thus taken an important step towards de-occupation and reintegration of Crimea.  He stresses that the three draft bills are the first part of the Crimean Platform’s package of legislation.

There has been protest since the Law “On creating a creating a free economic zone for Crimea and on the specific features of economic activity on temporarily occupied Ukrainian territory” was adopted in August 2014 and then came into force on 27 September that year.  The bill established a so-called ‘free economic zone’ for 10 years, however there have been persistent demands from Ukrainians forced by Russia from their homes , from the Mejlis, or representative assembly, of the Crimean Tatar people; and from human rights groups for its abolition

Key objections were cited by Umerov in his explanation of why the law as it now stands violates human rights.  The law is discriminatory since Ukrainians with Crimean registration who fled to mainland Ukraine are legally treated as foreign nationals.  They have more restricted access to bank services, and have to pay inheritance tax as though they were foreign nationals.

The law does not aid Ukrainian business, but rather creates opportunities for shady schemes for collaborating with the occupation regime.  For this reason, Umerov is convinced, abolition of the law will defend Ukraine’s national interests.

The new laws will invalidate licences and special permits issued before occupation.  At present such licences are valid, with this effectively enabling people to carry out business with the Russian occupiers and, therefore, against Ukraine’s interests.

Umerov stresses that there are positive aspects to the law on a free economic zone, and they are proposing that these be continued via other laws.  They include the procedure for crossing the administrative border between occupied territory and government-controlled territory and some provisions regarding taxes.

The three bills tabled so far are No. 5501 on amendments regarding taxes and excise; No 5502 on cancelling the law on creating the free economic zone and making relevant amendments to legislation; and No. 5503 on amendments to the Customs Code in connection with the abolition of the free zone.

The working group on these bills and others is made up of 17 central authorities, including three ministries, the Tax Administration and the President’s Representative Office on Crimea, as well as civic organizations. A second major package of draft bills is planned for 18 August, on the eve of the 30th anniversary of Ukraine’s independence.

It is very much to be hoped that there is now the will to change a law that should never have been passed.  It was only through a civic initiative by Crimean Tatar leaders and various civic organizations that first the flow of goods between mainland Ukraine and occupied Crimea, and then the supply of electricity were seriously impeded.  On 20 September 2015, a civic blockade began at all three crossings into occupied Crimea (Chonhar, Chaplinka and Kalanchak) with these blocked to trucks, although cars and individuals on foot were allowed through.  Mustafa Dzhemiliev, Crimean Tatar leader and the then President’s Representative on Crimean Tatar Affairs, was present and stressed that the situation was unheard of where a country whose territory has been occupied by an aggressor state continued to provide the occupied territory with food, electricity, etc., There is no excuse for trade, he says, which enables both the occupation regime and Ukrainian oligarchs to act as though nothing had happened.

The same surely applies to the law on a free economic zone. An extremely important addition in the bills now in parliament is a proposed ban on water supplies to Crimea until its de-occupation, as well as a ban on trading with occupied territories.  Ukraine cannot continue asking other countries to prohibit their companies from doing business with the Russian occupiers if a Ukrainian law provides glaring loopholes for just such collaboration.

On 18 May, President Volodymyr Zelensky tabled as urgent a draft bill on indigenous peoples. This extremely important and overdue step will be discussed separately.