The Russian-controlled Krasnogvardeisk District Court in occupied Crimea has imposed large fines on three mothers who separately stood in silent vigil, with placards in defence of their sons, all of whom are recognized political prisoners.  Even Russia’s repressive laws against peaceful assembly allow single-person pickets, so the police claimed that the three women, standing alone in different parts of Krasnogvardeisk, had somehow taken part in a “mass unauthorized public event”.  Their ‘justification’ for this was that the pickets had been devoted to one subject.  This evident nonsense was accepted by the ‘court’, which also ignored numerous other glaring irregularities in the protocols against the women.  According to the lawyers representing the three women, the ‘judge’ – Dzhangar Sangadzhi-Goryaev – came with the ‘rulings’ already printed out.  These were three copy-pasted texts, with the differences only in the names of the women and in the amount of the fines.

The three mothers: Emine Abdulganieva  Zelikha Abkhairova and Zurye Emiruseinova had all tried to hold single-person pickets, in different parts of the Krasnogvardeisk district on 31 October 2020, on the eve of the sentencing of their sons.  Each held a placard with the words “My son is not a terrorist”, with each accompanied by a photo of the woman’s son.

Zurye Emiruseinova is elderly and in poor health, and ended up taken to hospital after Russian-controlled police harassed her and even tried to detain her.  She had positioned herself at the side of a main road, with her daughter-in-law standing at a distance and streaming the picket onto Facebook.  The elderly lady had only been standing there for around three minutes, when the officers appeared demanding to see her documents; shouting and demanding that she come with them to the police station.  They claimed that she had been holding a ‘rally’, although it was clear that she was standing alone and ignored Aliye Emiruseinova’s repeated requests that they lower their voices, as her mother-in-law suffered from hypertensive heart disease and was already in a state of stress because of the sentences due. In the end, an ambulance was needed to take the elderly lady to hospital.  The police followed, threatening to take her to the station, and only left after the doctors said that she needed hospital care for several days.

On 21 May, Sangadzhi-Goryaev found Zurye Emiruseinova ‘guilty’ of having ‘infringed the established order for organizing or holding a meeting, rally, demonstration, procession or picket’ (Article 20.2  § 5 of Russia’s code of administrative offences’.  According to the defence, Sangadzhi-Goryaev did not make any pretence to retire to the consulting chamber, and had evidently appeared with the ruling already printed out.

The defence cited other occasions where mothers or wives of other political prisoners had come out in identical single-person pickets and where the court had not found there to have been infringements.  As Aider Suleimanov pointed out, “the fact that people have one problem does not make them participants in a mass event”.

Zurye Emiruseinova herself told the ‘court’ that “Terrorists are those who with weapons in their hands come into our homes. Our children are God-fearing Muslims. And we will continue our peaceful struggle for justice. We came out and will continue to do so until they are released. That is our right.”

The defence plans to lodge an appeal against the ‘court’s’ ruling and fine of five thousand roubles.  Suleimanov called such prosecutions pressure on the mothers of political prisoners and a signal to all who do not agree with the actions of the authorities that they too will be prosecuted.

The same ‘judge’ issued essentially identical rulings against Emine Abdulganieva and Zelikha Abkhairova, with the only difference being that both were fined 10 thousand roubles.  Although these should have been open hearings, Sangadzhi-Goryaev ordered all non-parties to leave.  He claimed that this was due to the pandemic, however the defence suggests that it was because he didn’t want witnesses to all of the irregularities. 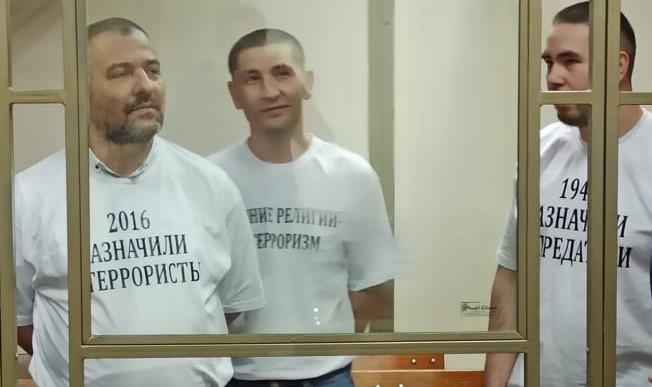 None was accused of any recognizable crime, with the charges solely of unproven involvement in Hizb ut-Tahrir, a peaceful pan-Islamist organization which is legal in Ukraine.  The Russian Supreme Court declared it ‘terrorist’ in 2003 in a highly irregular, secretive ruling probably aimed at helping the authorities send victims of religious persecution back to Uzbekistan.  This ruling is now being used in occupied Crimea as a weapon, in particular against Crimean Tatar civic journalists and activists.

The men appeared in court for the verdicts in T-shirts, reading “Studying religion is not terrorism” and pointing to how in 1944 the Soviet regime falsely labelled Crimean Tatars ‘traitors’ in order to justify Stalin’s Deportation of the entire Crimean Tatar people.  Under Russian occupation, Crimean Tatars are increasingly labelled ‘terrorists’ or ‘extremists’, also without any justification.

As well as this innocuous taped conversation, the FSB also used a book planted during the armed searches carried out on 14 February 2019 with lawyers prevented from being present, as ‘evidence’, and ‘secret witnesses’ whose ‘testimony’ cannot be checked.

Despite the lack of any crime and totally flawed nature of the ‘evidence’, presiding judge Ruslan Plisko, together with Igor Kostin and Yevgeny Zviagin from the Southern District Military Court in Rostov (Russian) sentenced three innocent men to terms of imprisonment far higher than those Russian judges generally pass against people convicted, on real grounds, of violent crimes.