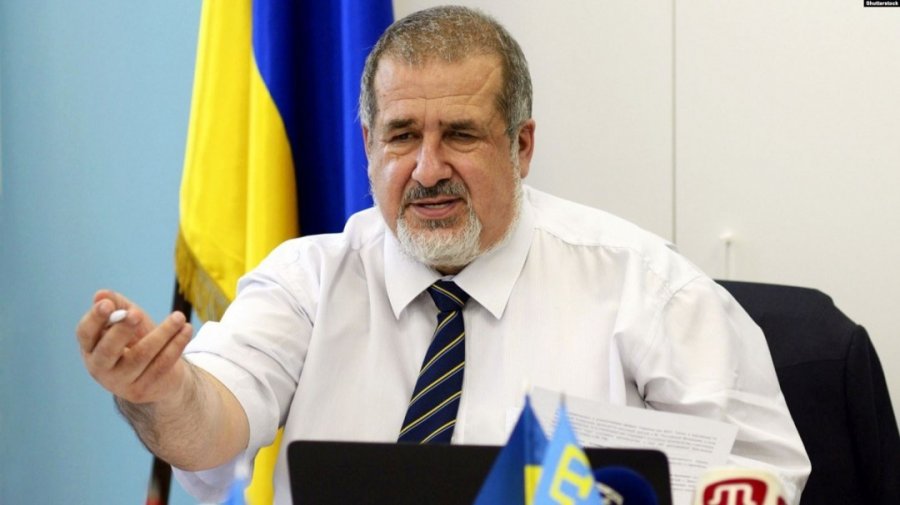 A nine-year sentence has been demanded in Russian-occupied Crimea against Refat Chubarov, Head of the Mejlis, or representative assembly, of the Crimean Tatar people.  The charges are legally absurd, with the ‘trial’ itself a squalid remake of Russia’s trial of the First Deputy Head of the Mejlis, Akhtem Chiygoz.  The difference is that Russia is now, formally, seeking to imprison a person whom they banished from his homeland soon after their invasion and annexation in 2014.  Chubarov is being ‘tried’ in absentia, on the same charges that were internationally condemned when used in 2015 to imprison Chiygoz and to then sentence him to eight years’ imprisonment.

During the ‘debate’ at the Russian-controlled Crimean High Court on 24 May, prosecutor’ Diana Yevtushenko claimed that Chubarov’s ‘guilt’ had been fully proven and demanded the 9-year sentence.  The Mejlis leader is represented in court by Aleksandr Osokin, after Russia illegally prevented Nikolai Polozov, the lawyer whom Chubarov chose and who represented Chiygoz  from assuming that role.

Russia’s Investigative Committee announced at the end of March 2020 that it was charging Chubarov under two articles of Russia’s criminal code - both the identical charges used against Chiygoz, and the notorious Article 280.1 § 2 on so-called ‘public calls to carry out action aimed at violating Russia’s territorial integrity’’.  The second of these two was first announced in October 2015, and clearly pertained to the statements Chubarov, together with all international bodies and democratic states, make about Crimea being Ukrainian and the need for Russia to end its occupation.   It seems that Yevtushenko announced on 24 May that she was not seeking imprisonment on this charge, in view of its alleged decriminalization. In fact, the article that was partially decriminalized was Article 282 on ‘incitement’.  It is possible that, at some stage, the ‘indictment’ was modified, however the Investigative Committee may also have decided that it was better to remove such an obviously political charge, and to concentrate on the ostensibly more criminal charge of ‘mass riots’.

This charge, however, does not become any the more convincing for being rehashed and remains as lawless as it was when used to imprison Akhtem Chiygoz; Ali Asanov and Mustafa Degermendzhy and to prosecute a number of other Crimean Tatars.

The demonstration, organized by the Crimean Tatar Mejlis, on 26 February 2014 almost certainly foiled Russia’s attempts to carry out a coup without openly deploying Russian soldiers.  The huge demonstration of Crimean Tatars and other Ukrainians outside the Crimean parliament that day prevented an FSB-overseen attempt to ‘vote’ on a change in Crimea’s status, with Russia then deploying soldiers without insignia to seize control the following morning.

Russia has brought in ‘legal acts’ to try to overturn the principle that the law is not retroactive, with respect o occupied Crimea, but cannot change the fact that the demonstration on 26 February 2014 took place on Ukrainian territory under Ukrainian law.  The attempt to charge Chubarov with ‘mass riots’ under Russian law is as legally nihilistic as the identical charges against Chiygoz in 2015.

It is also factually misleading and overtly anti-Crimean Tatar.  There were no ‘mass riots’ that day.  The two deaths were in the area where pro-Russian demonstrators were gathered, and one person died of a heart attack.  Back in December 2015, the husband of the other person who died,  Valentina Korneva, was reported to have stated that he did not think any of the Crimean Tatars then charged were to blame and to have mentioned two pro-Russian thugs.  It is almost certainly because of the impossibility of blaming Crimean Tatars that during the earlier trials, those deaths were constantly mentioned, but no charges were ever brought.

In the ‘trial’ of Chubarov, 77 alleged ‘victims’ were called, including four during the debate.  The four supported the prosecution’s claims, although one stressed that he had not heard any calls from Chubarov to mass riots, in fact the contrary, calls to stop the confrontation.  It should be stressed that from early 2015, it was clear that the Russian ‘investigators’ only recognized ‘victims’ from among the pro-Russian demonstrators, and many of those brought into the earlier trial of Chiygoz were people who owed their work or position to those who had seized power on 27 February 2014.

As well as a huge number of eyewitnesses, there is also a vast amount of video footage of the events that day which directly contradict the prosecution’s case.  This, however, is a politically motivated ‘trial’, with Chubarov’s conviction on preposterous ‘mass riot’ charges predetermined.   The verdict is due on 1 June.

Russia is refusing to comply with the order issued by the UN’s International Court of Justice [ICJ] on 19 April 2017 that it withdraw its ban on the Crimean Tatar Mejlis, and other forms of discrimination against Crimean Tatars and ethnic Ukrainians.  It has, instead, concocted various criminal prosecutions that were presented as connected with the Mejlis, but did not in fact involve Mejlis leaders.  The criminal charges announced in March 2020 against Chubarov; veteran Crimean Tatar leader and the first Head of the Mejlis, Mustafa Dzhemilev, and against  Lenur Islyamov, Head of the Crimean Tatar TV ATR are presumably so that ‘convictions’ can be waved about as justification for Russia’s persecution, although they instead provide still further incriminating evidence of Russia’s aggression and its persecution of Crimean Tatars.