Court in Russia ignores torture in Donbas, abduction and zero evidence for Ukrainian’s 10-year sentenceUkrainian tortured in Donetsk concentration camp, then sentenced to 10 years in Russia Russia sentences Ukrainian political prisoner to 10 years after abducting him from DonbasKremlin hostage tells Russian court how he was tortured in occupied Donbas & abducted to RussiaRussia uses torture by Donbas militants to fabricate a new Ukrainian ‘spying trial’Donetsk militants and Russian FSB collaborate in torture and abduction of Ukrainian political prisonerRussian proxy Donetsk ‘republic’ formalize plunder of Ukrainians’ property Ukraine imposes sanctions on pro-Russian MP Medvedchuk & his wife. What about criminal proceedings?Russia’s ‘all for all’ exchange: those who were not returned to UkrainePoroshenko honours judge who effectively sentenced renowned Ukrainian dissident to deathRussian LGBT activist charged with calls to violence against fascists and terroristsIn Memoriam: Nina MarchenkoStrasbourg rules in favour of Ukrainian teacherMoral Choice
• Topics / News from the CIS countries 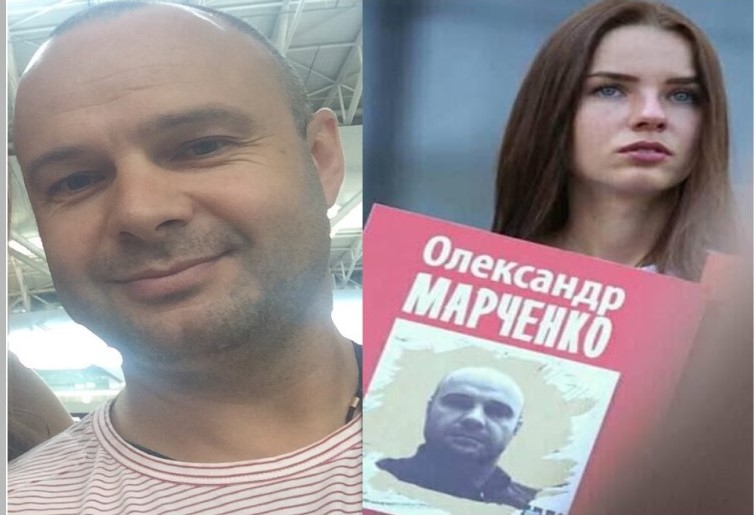 Oleksandr Marchenko, Kateryna Marchenko calling for the release of her husband

Russian prison authorities are preventing Ukrainian political prisoner Oleksandr Marchenko from regularly receiving thyroid hormone medication, needed to compensate for a removed thyroid and to prevent the cancer he once survived from returning.

Team29, whose lawyer Yevgeny Smirnov is representing Marchenko, reports that the situation has become extremely serious.  If he is prevented from regularly taking thyroid hormones, Marchenko’s legs give out, and he cannot stand.  Instead of understanding this, and preventing the recent month-long period without any medication, the Krasnodar prison colony staff have placed him in a SHIZO or punishment cell.  His ‘transgression’ was that, after being deprived of medication and gravely weakened, he lay down during the day in his cell.

Marchenko is a recognized political prisoner whom Russia should not have imprisoned.  Once in Russian custody, however, Russia bears direct responsibility for his life, with this meaning providing the necessary medical care.  In fact, it is Marchenko’s family and lawyers who are obtaining the thyroid hormone medication that he needs and passing it to the prison administration.  The latter need only pass it on to Marchenko, but for around a month, they failed to do so, with this resulting in a sharp deterioration in Marchenko’s condition.  Despite this, he has not once been examined by a doctor, although he has been at the prison colony for more than a month.

Held all the time in a cell, without medication, his legs became like jelly, and he could neither stand, nor walk.  It was in that state of extremely weakness, that he lay down on the bunk.  The prison staff, who had not provided him with urgently required medication, proved zealous now, taking a photograph of him lying down and using this to formally punish him with a term in SHIZO.  In that punishment cell, there is no fresh air at all, and the bunks are only opened up at night.  He has so far spent 15 days in this SHIZO, sent there first for five days, then for 15.

Marchenko’s second, Krasnodar-based, lawyer Denis Pluzhny has lodged formal complaints over both the failure to pass on the Ukrainian’s medication, and over the unwarranted punishments.  He has received no response and Marchenko himself is worried that he will again be placed in the SHIZO.  It should be said that Russian prison staff do very often use such totally unjustified penalties against Ukrainian political prisoners, with the consequences in this case, combined with their failure to provide medical care, potentially fatal.

Team 29 have added a plea to us all to help Marchenko by writing letters or even just postcards to him.  This is always important in showing political prisoners  - and Russia -  that they are not forgotten. Lots of letters also influence the prison administration – they are much more likely to watch their step and not impose unwarranted penalties if they know that people from all over the world are writing to Oleksandr (scroll down for details on how and where to write).

50-year-old Oleksandr Marchenko’s story is one that warrants scrutiny by the International Criminal Court, given the Russian FSB’s clear collaboration with Russian-controlled militants in occupied Donbas.

His flight was first made public in December 2019 when both Ukrainian human rights groups and the Russian Memorial Human Rights Centre declared him a political prisoner.  More is now known, for example, about the torture he was subjected to at the secret Izolyatsia prison in the self-proclaimed, but Russian-controlled ‘Donetsk people’s republic’ [DPR].

The story begins with Marchenko’s fascination since childhood with sports cars and the second-hand Lamborghini Diablo sports car which he was finally able to afford in 2009.  The car needed major restoration and repair work, which only one firm in Ukraine was prepared to take on -  NonStop, a Donetsk-based company.

This was no super expensive new model, but it was easily good enough for the Russian-controlled militants of the so-called ‘Donetsk people’s republic’ [DPR] to steal after seizing control in 2014.  Then in 2017, the car, repainted black, appeared on a video clip about a race in occupied Donetsk. From his own sources, Marchenko learned that the car had been appropriated by Alexander Timofeyev, known as ‘Tashkent’, who was the so-called ‘minister of taxes and revenue’ under militant leader Alexander Zakharchenko.  When the latter was killed in a bomb blast in August 2018, ‘Tashkent’ lost the ensuing battle for power and fled to Russia.

According to Kateryna Marchenko, she and her husband had been living in Kyiv for several years and knew next to nothing about what was happening in occupied Donbas.  It is much less likely that Husakov was so naïve.

Unfortunately, Marchenko decided to try this attempt to get his car back, and did so in the worst possible way, travelling via Minsk through Moscow and across the Russian / militant controlled part of the border into occupied Donbas.  It was seemingly after Marchenko filed his application for the car to be returned to him, that he was seized at a border crossing on 17 December 2018.

Over the next two months Marchenko was held, and tortured, at the Izolyatsia secret prison in Donetsk which former hostages refer to as a concentration camp.  Marchenko was, for example, stripped, with electric currents attached to various parts of the body, including genitals, and was also hung from the ceiling, by handcuffs, for whole days.

It was only on 19 February that he was able to send a text message to his family, telling them that he was in Krasnodar. Marchenko’s ‘administrative arrest’ was extended several times, and a court eventually ordered his deportation – a ruling applauded by both Marchenko’s lawyer and the Consul. Instead, and despite the court order, he was not deported.  For around a month and a half, he was held in a deportation centre, clearly while the FSB were fabricating ‘a case’ against him.

The ’espionage’ charges they eventually came up with make no sense, and are not backed by any evidence.  He was, nonetheless, sentenced by a court in Krasnodar on 28 November 2020, to 10 years, with that sentence upheld by the Third Court of Appeal on 1 April 2021.

Even just a few words will tell him and Russia that he is not forgotten. Letters need to be in Russian, and any political subjects or reference to his case should be avoided. If possible, include an envelope and some thin paper as he may well try to reply.

If you are comfortable writing in Russian, but have problems knowing what to say, Team 29 has an excellent advice page here.