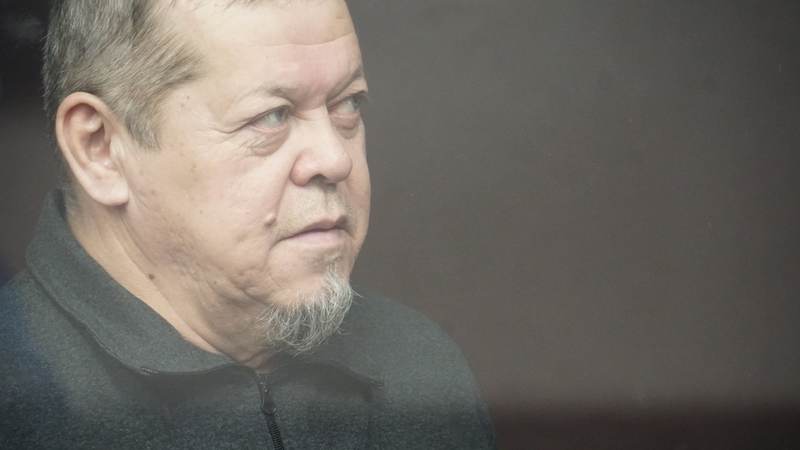 Zekirya Muratov was arrested two months after he refused to collaborate with an FSB officer, by providing false testimony against fellow Crimean Tatars.  The FSB man, former Ukrainian turncoat Aleksander Kompaneitsev left, telling Muratov that he would get him imprisoned “whatever”. It was a threat to be taken seriously, not least because Kompaneitsev has already played a similar role in the arrests and imprisonment of six Amnesty International prisoners of conscience, including human rights activist Emir-Usein Kuku.  63-year-old Muratov, who has already been imprisoned for almost a year, is in very bad health, and would be unlikely to survive the long sentence he is facing for his integrity.

Muratov’s wife, Nina Malik, recalled that menacing ‘visit’ immediately after her husband was arrested on 7 July 2020.  Muratov himself has now provided details to the Southern District Military Court in Rostov where he is on trial.  He named Kompaneitsev and said that the latter had threatened to get him a prison sentence if he didn’t agree to collaborate with him.  The FSB man, Muratov said, had complained that “there was no use” in the FSB’s previous ‘informer, and had told him that if he worked with the FSB, he’d “have a green light”.  If he didn’t, he’d “go down hard”.  Muratov told the court that he had refused, saying “let them imprison me, I will not go against my people, and against my religion”.

In all such cases, the men are charged with involvement in Hizb ut-Tahrir, a peaceful pan-Islamic movement which is completely legal in Ukraine, and which is not known to have carried out acts of terrorism anywhere in the world. Russia has never provided any grounds for its highly secretive 2003 Supreme Court ruling that declared Hizb ut-Tahrir ‘terrorist’, yet this inexplicable ruling is now being used as justification for huge sentences on supposed ‘terrorism charges’.  Each individual is accused either of the more serious ‘organizing’ a Hizb ut-Tahrir group (Article 205.5 § 1 of Russia’s criminal code, carrying a sentence of up to life imprisonment, or of ‘involvement’ in such an alleged group under Article 205.5 § 2, with this still carrying a potential sentence of 10-20 years.  It is the latter charge which Muratov is facing.  Since he is ‘on trial’ by himself, it seems unlikely that the FSB even bothered to carry out their usual illicit taping of innocent conversations about religion, politics, Russian persecution of believers, which are then claimed, by FSB-loyal ‘experts’ to ‘prove’ involvement in Hizb ut-Tahrir.  As well as the planted ‘prohibited literature’, the prosecutor has already produced the first ‘secret witness’, who may well be a person who did not withstand Kompaneitsev’s blackmail.  The court predictably rejected lawyer Lilya Hemedzhi’s application for the person’s identity to be revealed, although there are no legitimate grounds for any secrecy.

While there is clearly no independent evidence to back the account Muratov and his wife have given of the pressure to collaborate, there is considerable testimony pointing to Kompaneitsev having played an identical role in securing huge sentences against six Crimean Muslims from the Yalta region.

Aleksandr Viktorovich Kompaneitsev is a former SBU [Ukrainian Security Service] officer who betrayed his oath to Ukraine and began working for the Russian FSB.  It is possible that his own treachery has made him pursue men of integrity, with his first target having been Emir-Usein Kuku, the Yalta regional head of the Crimean Contact Group for Human Rights.  It was after Kuku categorically refused to collaborate that he became the victim of an apparent abduction attempt which only turned into an ‘FSB search’ , led by Kompaneitsev, after Kuku’s cries for help were heard and a large group of people gathered.

Kuku was arrested on 11 February 2016, together with fellow Crimean Tatars Muslim Aliev and Inver Bekirov and an ethnic Ukrainian convert to Islam, Vadim Siruk.  This was not the first such prosecution on gravely flawed ‘Hizb ut-Tahrir charges’, but gained international publicity because Kuku is a human rights activist and because of the shocking brutality of the armed searches that day.  We know from Dinar Minadirov, who was also detained that day, but not arrested, of the methods that the FSB, and specifically, Kompaneitsev used to concoct their prosecution case against the men.  Minadirov left Crimea almost immediately, fearing that he might not be able to continue enduring the torture he was subjected to.  He saw another person in the FSB building that day who later clearly did provide the ‘testimony’ demanded.

We know also that Kompaneitsev visitedt Bekirov in SIZO [remand prison] and threatened to arrest his nephew, Refat Alimov, if he did not give false testimony against himself; Aliev; Kuku and Siruk.  He could not do so, and on 18 April 2016 Alimov was arrested, together with the youngest of the men, Arsen Dzhepparov.

It became clear later that Arsen and his wife, Zarina had been expecting his arrest, following demands that he testify against the arrested men.  The first time he refused, the FSB got him fired from his job. A week later, the FSB caused a minor road incident involving Dzhepparov’s car, stopped him and, when he still refused, got him fined for supposed drunken driving.  On that occasion, the traffic police officer told the 25-year-old Crimean Tatar that, whatever the FSB wanted, he should agree to, since, otherwise, they’d destroy him.  A week later, on 18 April 2016, armed FSB and other officers burst into his home and arrested him on the same ‘terrorism’ charges as the political prisoners he had refused to tell lies about.

The men are now all serving huge sentences of up to 19 years without any crime.  More details here:  Huge sentences upheld for defending human rights and integrity in Russian-occupied Crimea   Addresses to write to the men can be found here.

He is ‘on trial’ alone and certainly needs to know that he is not forgotten, but the letters also tell both the SIZO prison staff and Moscow that their actions are under scrutiny. The 63-year-old is a musician (clarinet player) by profession but is in extremely poor health. He should have been peacefully enjoying retirement with his wife, but is instead imprisoned, essentially for behaving honourably, in conditions that are tantamount to torture even for men half his age.

Letters need to be in Russian, and on ‘safe’ subjects.  If that is a problem, use the sample letter below (copying it by hand), perhaps adding a picture or photo. Do add a return address so that he can answer.