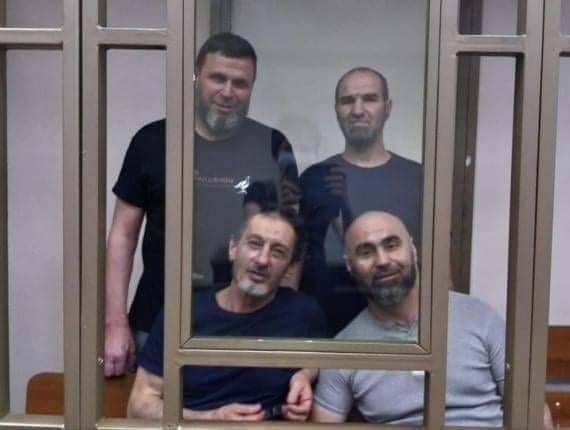 A Russian prosecutor has demanded horrifically long sentences of up to 19 years’ imprisonment against four internationally acknowledged Crimean Tatar political prisoners, not one of whom is accused of any recognizable crime.  The four men are essentially imprisoned for their religious independence, but the persecution of two of the men, Lenur Khalilov and Ruslan Mesutov, is also linked with attempts to crush the ‘Alushta’ Religious Community and to seize the 19th century Yukhary-Dzhami Mosque which the community has legally occupied since 1994. It is no coincidence that Khalilov, as Head of ‘Alushta’ and Mesutov, an active member of the community, are now facing the longest sentences.

The four men’s ‘trial’ has been taking place at the Southern District Military Court in Rostov-on-Don, which has been notorious for its politically-motivated sentences against Crimean Tatar and other Ukrainian political prisoners since the trial of Ukrainian filmmaker Oleg Sentsov back in 2015.  The four men were declared political prisoners by the authoritative Memorial Human Rights Centre in September 2020) and their release has been demanded by major international bodies and democratic countries.  The prosecutions are part of a conveyor belt of repression with a large number of Ukrainian Muslims either ‘convicted of’ or currently imprisoned.  The nature of the cases is tellingly reflected in the fact that all the men face the same flawed charges, but much longer sentences than the first victims.

On 10 June, exactly two years after the men were arrested, Russian prosecutor Yevgeny Kolpikov claimed that their ‘guilt’ had been proven, and demanded the following sentences, with all the terms of imprisonment in the harshest of Russian prison colonies, and the first three years in a ‘prison’, the worst of all Russian penal institutions.

These “insane terms of imprisonment”, as one of the defence lawyers called them, are far higher than those which Russian courts pass against people found guilty of real crimes of violence.

Here the men are accused only of unproven involvement in Hizb ut-Tahrir , a peaceful transnational Muslim organization which is legal in Ukraine. Russia has never explained why, in 2003, it declared a movement that is not known to have committed acts of terrorism or violence anywhere in the world ‘terrorist’.  Lenur Khalilov and Ruslan Mesutov are charged with the more serious ‘organizer’ role under Article 205.5 § 1 of Russia’s criminal code.  Eldar Kantimirov and Ruslan Nagayev are accused of ‘involvement in such an alleged ‘group’ (Article 205.5 § 2),  The Russian FSB need ‘organizers’ for their paperwork, although it often seems entirely arbitrary whom they choose.  The difference is, however, huge as far as sentences are concerned, since Russian ‘judges’ are much less likely to risk trouble by passing shorter sentences against those charged as ‘organizers’, while they may hand down lesser sentences against those charged of ‘involvement’. All four men are also charged, under Article 278, with ‘planning to violently seize power’.  With respect to Russia, the Memorial Human Rights Centre has noted that the extra charge is generally used against people who refuse to ‘cooperate’ with the investigators.  In occupied Crimea, Russia is using these ‘Hizb ut-Tahrir ‘ charges against Crimean Tatar civic journalists and activists and increasingly adds this particularly absurd charge in all cases.  As in the majority of such cases, then men here had shown solidarity with political prisoners and their families. Kantimirov, in particular, had visited court hearings and taken part in single-person pickets, for which he had already been subjected to harassment on administrative charges.

The entire ‘case’ against the four Crimean Tatars from the Alushta region appears to be based on illicit tapes of conversations on religious subjects, or about Russia’s persecution of Muslims.  These get sent to certain FSB-loyal ‘experts’ who claim that this or that word ‘proves’ that the speaker is a member of Hizb ut-Tahrir . The other stable component of such trials are ‘secret witnesses’ whose testimony cannot be verified.  When questioned, these alleged ‘witnesses’ almost invariably ‘remember’ only their incriminating ‘testimony’ and prove quite unable to recall where they (allegedly) met the defendants, what their homes or offices looked like, etc.  Despite the obviously dubious nature of such testimony and the lack of any grounds for concealing their identity, the judges always side with the prosecution and more often than not block questions aimed at demonstrating that the so-called ‘witnesses’ may not even know the defendants.

There are further concerns in this case since the arrest of Khalilov and Mesutov is part of a mounted offensive against the ‘Alushta’ religious community which has demonstrated independence from the Muftiat of Crimea.  The latter’s collaboration with the Russian occupation regime has given it benefits, including, it would seem, effective possession of the Yukhary-Dzhami Mosque which has been illegally seized from the community.

In its statement on the case, Memorial HRC wrote that “the Crimean Muslims are guilty only of being participants in religious organizations” and their persecution is in breach of Russia’s Constitution which guarantees freedom of conscience.  The men also supported other political prisoners and their families and Memorial notes that “the convenient and customary accusation of involvement in Hizb ut-Tahrir has become a weapon for crushing solidarity movements in Crimea”. Memorial has repeatedly pointed out that Russia is in violation of international law through its use of Russian legislation on occupied territory.

The men will be giving their final addresses to the court on 24 June after which the verdicts will be announced.  Unfortunately, nothing in the behaviour of presiding judge Roman Viktorovich Saprunov, and the other two judges - Maxim Mikhailovich Nikitin and Rizvan Abdullayevich Zubairov, nor their previous involvement in similar cases, give any grounds for optimism.  It remains very important, nonetheless, that this travesty of justice by an illegal occupying regime gets maximum publicity.