Most Crimean Tatars appear to have boycotted the elections which Russia illegally held in occupied Crimea. How many other Ukrainians also refused to take part is as yet unclear, but it seems likely that despite threats and coercion, the turnout was low. Judging by previous experience since Russia’s invasion of Crimea, the boycott could lead to an escalation in repression. | детальніше

It is 77 years since the Soviet Union invaded what was then Poland, and two and a half years since Russian troops seized control of Ukrainian Crimea. Both Soviet dictator Joseph Stalin and Russian President Vladimir Putin presented their invasions as ‘protecting ethnic minorities’. | детальніше

Any Vote Is A Vote For Putinism

Russian opposition politician Garry Kasparov follows Crimean Tatar leader Refat Chubarov and Kyiv in stressing that the international community must refuse to recognize the results of Russia’s parliamentary elections, which it is illegally holding also in occupied Crimea | детальніше

Crimean Tatar Mejlis leader Refat Chubarov has addressed all Crimeans calling on them to boycott the Russian parliamentary elections which Russia is insisting on holding in annexed Crimea. His appeal coincides with a Ukrainian parliamentary resolution asking the international community to join Ukraine in not recognizing the elections in Crimea. | детальніше 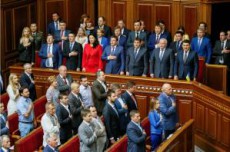 Despite the ruling coalition’s fragility in parliament, civil society activists hope MPs will unite over crucial initiatives to ensure the passage of these ten changes: | детальніше

How to Manufacture a War

Ukraine’s Prosecutor General’s Office has released what it says are recordings of intercepted telephone conversations between Kremlin aide Sergei Glazyev and proxies in Ukraine, in which he gives them specific instructions about instigating unrest in Donetsk, Kharkiv, Zaporizhzhya, and Odesa as early as February 2014 | детальніше

Behind The Scenes In Ukraine, Ties To Putin Help Power Broker Pull Strings

More than a decade ago, Viktor Medvedchuk became known as the "Gray Cardinal" because his low profile masked unparalleled clout in the halls of power in Ukraine. These days, detractors call the millionaire tycoon and backroom politician with close personal ties to Russian President Vladimir Putin: tthe Prince of Darkness. | детальніше

25 years since the coup which led to the collapse of the Soviet Union, Russia has returned to the punitive psychiatry, politically motivated trials of dissidents, rights violations and virulent propaganda of Soviet times. Nowhere is this seen more dramatically than in Ukrainian Crimea, invaded and annexed in early 2014 | детальніше

Internationally recognized borders are not re-drawn by armed annexations. This is certainly understood by Germany’s leaders and it is baffling that Deutsche Welle is continuing to present a different picture | детальніше

The West Has a Ukraine Challenge, and It’s Not Going Away

The Kremlin has found that Ukraine is too big to swallow. Nonetheless, despite Russia’s international isolation, sanctions against it, decline in oil prices, and subsequent recession, the Kremlin has not changed its Ukraine agenda | детальніше

With nothing to confirm Russia’s claims of Ukrainian ‘attacks’ in Russian-occupied Crimea except televised ‘confessions’, it is highly suspicious that the FSB are trying to prevent Yevhen Panov from seeing a proper lawyer. | детальніше

Paul Manafort Is the Tip of the Iceberg

Trump’s campaign chairman is under the microscope for his dealings in Ukraine, but he is part of a much larger consulting industry that serves the interests of autocrats. | детальніше

Although Russia’s claims that Ukraine had tried to ‘attack’ its own territory in Crimea have failed to convince anybody, the arrests are continuing. In a potentially menacing new slant, a top official in the occupation government has claimed that Ukraine is planning “new sabotage” under the guise of acts of resistance by Crimean Tatars | детальніше

The threatened Russian ‘response’ to alleged ‘attacks’ by Ukraine on Russian-occupied Crimea has not included answers to very basic questions, with the Russians supposedly killed remaining unnamed, together with almost all the alleged ’saboteurs’. One, however, in a format Russia has used since 2014, has now ’confessed’ on state-controlled Russian TV | детальніше

Is Putin Preparing a New Attack on Ukraine?

Observers have greatly feared that Russia’s President Vladimir Putin would start a small regional war this August. Russia has moved up its State Duma elections to September 18. Although only Putin’s parties are allowed to win, he has a predilection for “small and victorious wars” to mobilize his people. | детальніше

If Russia wanted to make its claims of an attempted Ukrainian terrorist attack on Russian-invaded and occupied Crimea credible, it should not have blocked the last remaining independent Internet sites days before the alleged attack. Bringing in massive amounts of military hardware prior to the supposed event also seriously lowers plausibility. | детальніше

The German public broadcaster’s commitment to rule of law and to impartial reporting is placed in question by participation of its journalists in a recent propaganda trip to Crimea organized by the Russian Foreign Ministry, as well as by reports omitting crucial information and words that might offend Russia. | детальніше

Further attempts to create an information blockade on Russian-occupied Crimea were followed this weekend by a block on the crossings between mainland Ukraine and Crimea, claims of Ukrainian ‘terrorist subversion’ and major deployment of heavy military equipment | детальніше

How the International Media Enables Russian Aggression in Ukraine

Why has the media been so cautious about Russia’s role in the conflict? It is not due to a lack of evidence. Proof of Russian involvement has been overwhelming since the early days of the fighting in eastern Ukraine | детальніше

The "Lisa case": Germany as a target of Russian disinformation

Germany‘s leading role in the Ukraine crisis, Angela Merkel’s consequent position on sanctions against Russia and her leadership in Europe make the German government a core target of Russian disinformation. | детальніше