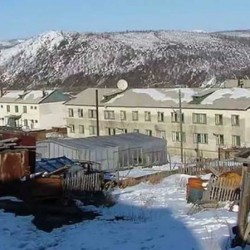 In November 2007, I was on my way to visit the worst of the worst of camps from Stalin time. The Kolyma gold mines were the worst in the Slave Empire of Stalin, but within this Hell on Earth, there was a special place. The Butugichag uranium mine. Andrei Vasilievich Kravtsiv told me about his experiences in that horrible camp, while we were sitting in the comfortable and warm Catholic Church in Magadan. Winter was
building up outside.   | детальніше

Do not open the door to militia!

All began when a militiaman was beating someone. A woman summoned militia to stop the fight. The militiamen switched to beat the innocent woman, while the summoned militiamen contemplated this scene not without interest. | детальніше

Common sense has won. For the time being...

This is one of the appeals sent to the Sevastopol city council. Stalin’s atrocities are reminded and undesirable reaction to the possible positive decision is mentioned. | детальніше

Protests against erection of Stalin’s monument in Sevastopol

Sevastopol human rights protection group expresses the protest against erecting Stalin’s monument in Sevastopol on the initiative of city council. They ask their colleagues to join the protest. | детальніше

A general offended a priest.

‘The general used a chain of obscenities in the language of the foreign country, which is a perpetual enemy of the independence of Ukraine’. This a best definition of the Russian language spoken as native by the majority of Ukrainian citizens. | детальніше

The current state and the dynamics of dwindling of the Ukrainian population is presented in numbers and the reasons are analyzed. | детальніше

Feldman and his advocates were deprived of the right for defense

The trial of the scandalous "bankers’ case", which is being held in the Artemovsk district court of Lugansk demonstrated another juridical nonsense on 7 February. | детальніше

Roads as a source of products

For what a man was killed in Antratsit militia?

A new form of corruption

Crossed out of the lists

The US embassy lost their case to ‘Kyivenergo’

News from Russia: a new way of expressing solidarity with Chechnya

The simplest way of building a party system

The third Ukrainian competition for the best essay on Human Rights