No will to investigate harassment of journalists 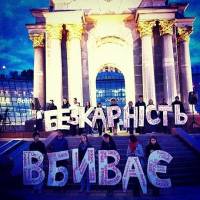 The Institute for Mass Information has received a response from the Prosecutor General’s Office to the petition from journalist organizations on 16 September.

As reported, on the 13th anniversary of the disappearance – and killing – of journalist Georgy Gongadze, journalist NGOs reported a considerable increase in attacks on journalists, and issued a petition regarding 21 high-profile cases linked with obstruction of journalists’ work.

The Prosecutor General’s Office responded by saying that 19 out of 21 cases had been added to the Unified Register of Pre-trial Investigations.

Two were not: in one case, the Chief Editor of the Zhytomir newspaper Svoboda complained of treatment by the Griffon court police.The PGO claims that no offence was found. With respect to D. Kostyukov, a Russian photographer beaten up while covering action by Femen, GPO says that the photographer resisted police orders and faced administrative proceedings.

The PCO has closed the investigation in 8 cases

In 10 the investigation, it says, is still continuing.  In three cases people are under suspicion, however they have been informed of this in only one case: that of the Chief Editor of the Truskavki newspaper who suffered light injuries.

In one other case the suspect has been declared on the wanted list, and in the 19th case the notification that a person is under suspicion has supposedly been prepared, but not delivered “due to the illness of the law enforcement officer”.

The Institute for Mass Information is therefore forced to conclude that only in one case can one speak of any real wish by the Prosecutor General’s Office to punish those guilty of conflict aimed at journalists.