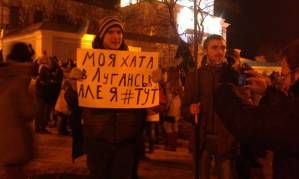 Although the main rally is planned for Sunday, there is a huge crowd on Mykhailivska [St Michael’s] Square in Kyiv tonight and no sign that people are willing to be intimidated.  The police are keeping their distance following the national and international outrage over the violent dispersal of demonstrators last night.

The picture above is of a protester from Luhansk with a sign which needs a little explanation, but which says it all:  The Ukrainian saying about “my house is the one at the end” reflects a mentality of insular indifference to what is happening around.   The sign instead reads:  My house is in Luhansk but I am here  (on St Michael;s Square)

The barbaric actions on Saturday morning were well described by the Economist today:

“THUGS and thieves always prefer to act in the early hours of the morning. So did Viktor Yanukovych, Ukraine’s president.  Less than 24 hours after he ruined the Eastern Partnership summit in Vilnius and ditched the Association Agreement with Europe, he vividly demonstrated his preferred alternative. In the small hours of Saturday morning he sent in special troops to beat up the few hundred students and activists who stood vigil for Ukraine’s European future. Armed with truncheons and tear gas, the police pummelled the peaceful demonstration, smashing heads and kicking people on the ground. Never in its 22 years as an independent country has Ukraine seen such violence.

Both Yanukovych and prime minister Azarov have tried to absolve themselves of any responsibility for the events.  An account of the circumstances which make it impossible to believe that the attack was not carried out, at very least, with their knowledge, can be found here http://khpg.org/1385813201.   The denial has reached absurd lenghts with Interior Minister Zakharchenko claiming to EU representatives on Saturday that Berkut had not attacked peaceful protesters, only "provocateurs".  If he preferred to not watch the video footage, he must surely have understood that his audience had.

There are, however, signs of schism within the Party of the Regions with two MPs – Bohoslovska and Zhvania  having left the party faction in protest, and two - Tihipko and Berezhna - having expressed protest.  For a party which has always seemed to vote and act as told, this is a telling sign.  It remains to be seen how many may finally prove to have some conscience, and how many will simply look for somebody else to blame.

Scapegoats, given the will, can always be found, but few will find claims that those holding the reigns of power were unaware of the planned offensive in the slightest convincing.