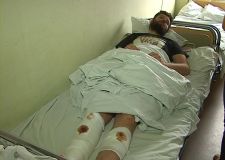 Channel 5 reports that in Ivano-Frankivsk EuroMaidan organizer, Maxim Kytsyuk was brutally attacked.  He was set upon by three men at around three a.m on Nov 30 and received head and leg injuries.

The 23-year old student from a local institute and other activists are convinced that the attack is connected with his activities in organizing EuroMaidan.  The police say they are looking at various versions. .