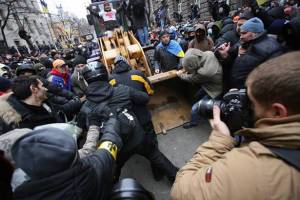 The violent scenes outside the President’s Administration on Sunday can almost certainly be attributed to the leader of Bratstvo, Dmytro Korchynsky.

“Korchyns’ky is widely considered an agent provocateur, and his "Bratstvo" already took part in several actions that were meant to provoke police suppression of peaceful protests. Moreover, it is said that Korchyns’ky taught a course at the explicitly pro-Putin "Seliger" summer camp in Russia.  The link between Korchynsky and the pro-Putin movement in Russia seems quite alarming.”

The police report then goes on to state that “people detained reported that the trouble near the Kyiv City State Administration was accompanied by a member of the VO Svoboda Party Miroshnychenko.

They also assert that around 100 people were involved in unlawful actions near the Cabinet of Ministers and that these were coordinated by somebody called Andriy Feshchuk.

Shekhovtsov was writing about the disturbances outside the President’s Administration, however it is worth noting his words: “Currently, there is no one reason to believe that these groups were somehow associated with the parliamentary radical right-wing Svoboda party”.

VO Svoboda is one of the opposition parties in parliament and the ruling Party of the Regions as a whole, and certain MPs in particular have been vociferous in claims that the party is “fascist”, “neo-Nazi”, etc.

As reported, there were huge contingents of police outside the President’s Administration on Sunday and dangerously few at the main demonstration, where they should have been active in protecting peaceful protesters and preventing provocation. A group of people in masks took over a bulldozer and ignored cries from other protesters that the demonstration needed to be peaceful.  The police were swift to report that they had been set upon by around 200 assailants and that 5 officers had been injured.