Bankova Prisoner: Oleksandr OstashchenkoBankova Prisoners: Anyone will do?Berkut’s VictimsUnconcealed ProvocationOZON: On where the police were and weren’t on Dec 1No Provoking a State of EmergencyNotorious provocateur Korchynsky behind the Presidential Administration violenceBohoslavska points finger at Party of the Regions for provocationLenin between Berkut and ProvocateursDeliberate attempt to provoke disturbances?Court Ban vs President’s WordsIvano-Frankivsk EuroMaidan organizer brutally assaultedTernopil activist Volodymyr Khanas brutally beatenGrowing anger and pitiful attempts by Ukraine’s leaders to shift the blameNot Cowered: Lviv EuroMaidanPolice action incompatible with democracyBerkut violently breaks up EuroMaidanUS warns of consequences if EuroMaidan dispersedThugs attack Channel 5 film crew near pro-government rallyHromadskie.tv journalists beaten up in centre of Kyiv
• Рубрики / Кримінально-виконавча система
•
•
• 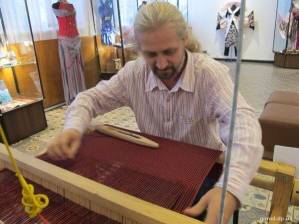 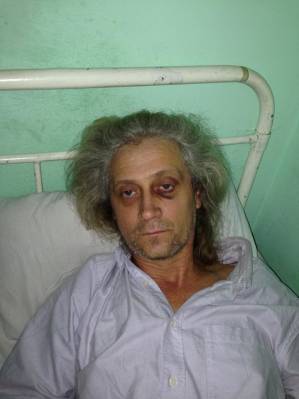 Valery Garagutz is 45 and has a 17-year-old son, Yaroslav.  He is a journalist and the founder of the Dnipropetrovsk newspaper “Litsa”.  Most importantly he was present on Bankova St in his capacity as a journalist.  Andriy Denysenko, Dnipropetrovsk civic activist and a good friend of Garagutz says that they had travelled to Kyiv and were on the demonstration together, and only got separated in the general chaos as the Berkut riot police began using sound grenades, gas etc against the protesters.

Both Denysenko and Garagutz’ lawyer, Oleksandr Miroshnyk stress that Garagutz was carrying out his journalist activities and that he had his journalist ID with him. Effectively all his documents got lost – scattered about or removed – when the Berkut police went for him.

In court Judge Natalya Hrynkovska heard all the evidence that he was a journalist and there carrying out his professional work, and ignored them, as she did his physical condition (see the photo).  Miroshnyk asserts that Garagutz was tortured, and that he was initially prevented from seeing him. He has lodged formal complaints.

Three MPs, the National Union of Journalists and one other individual all asked the court to release Garagutz on their guarantee.  She refused, preferring to go along with the prosecution’s claim that he was a danger and must remain in custody

No evidence at all was provided of involvement in the disturbances.  On Dec 6 details of the ruling became known.  It states that “witness A Prokutko” asserted that he had personally seen how the person recognized by him as Garagutz kicked and threw stones at the police, tried to pull off their shields, and also used foul language.

Judge Hrynkovska also states that after he was detained, “special means were removed” without specifying what these were.

He and others were supposedly guilty of injuring around 70 police officers.

It is not clear who „witness A Prokutko” is, and he was not present at the court hearing. Nor is there any indication of how and where he “recognized” Garagutz