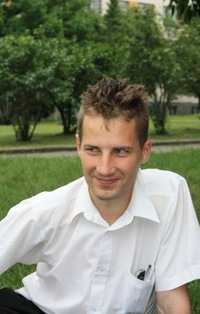 Yehor Previr, before his attempt to exercise his right to peaceful protest on Dec 1

27-year-old Yehor Previr was at the demonstration on Dec 1 together with his father and sister. They were separated after the disturbances had already begun, and all contact was lost with Yehor.  They only learned that he was in hospital the next evening, and the police and doctors have refused to provide information about the head injuries and concussion almost certainly inflicted after Yehor’s detention

27-year-old Yehor Previr is a freelance IT specialist and has also acted in several historical films.

His sister recounts that Yehor, she and their father were so shocked by the brutal behaviour of the Berkut riot police in dispersing the peaceful EuroMaidan protesters on Nov 30, that they all went together to the demonstration on Dec 1.

They were in an adjoining street between 4 and 5 in the afternoon when they realized that something was happening on Bankova St.  Kriistina and her father decided to move away.  Yehor was curious and said that he’d first see what was happening, then join them.  He rang soon after saying that terrible things were happening, and that he was returning.  That was the last contact they had with Yehor.

Desperate calls all that evening failed to locate him.

It was only on Monday evening that Yehor’s father learned that his son was in the ambulance clinic.  He arrived at the clinic only to find that all information about his son including his physical state was being classed as secret.   The doctors refused to give any information about his condition, and it only became clear on the day of the court hearing that he had head injuries and concussion.  A lawyer assigned to the case has not been in contact with the family at all.

At a press conference following the court hearing Kristina Previr explained that they had only learned in court from had happened. Yehor recounted how the police had run up to him around around 17.00.  He had shown no resistance, raising his hands to show that he was not carrying any weapon.  They beat him after that, and then simply left him there though he pleaded for them to call an ambulance.  He was only taken to hospital around 22.00.

He was in a terrible state during the court hearing on Dec. 3 and at one point an ambulance needed to be called for him.  Neither his clear injuries nor the lack of any witnesses or evidence of his involvement in the disturbances prevented the prosecution from demanding and Judge Olena Radchykova from agreeing to remand Yehor Previr in custody for 2 months.