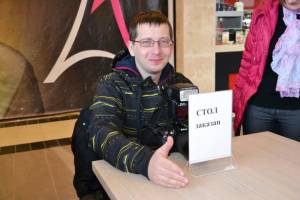 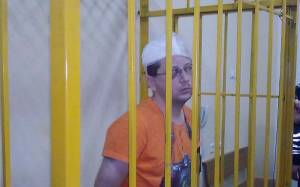 31-year-old Serhiy Nuzhnenko works in retail and is an avid photographer.  Over a number of years he has worked on a voluntary basis taking photos of the children in different children’s homes.

According to a friend, Pavel, he was simply taking photographs on Bankova St.  His friend, Yulia Serbulova told Ukrainska Pravda that she last heard from him at 16.30, after which contact was broken.  It was only because somebody found his passport and reported the find on a social network that she and his other friends found out what had happened.

Serhiy’s mother is elderly and lives in the Kirovohrad oblast.  His friends have so far managed to persuade her not to come up to Kyiv.  They themselves are still in shock over what has happened.

A friend and lawyer were in court on Dec. 3.  They handed over character references obtained, two opposition MPs asked for Serhiy to be released on their security, but to no avail.

According to Nelly Verner, a journalist who was present in the court, Nuzhnenko was in a terrible state with his head in bandages and body covered with bruises.  Judge Malinovska showed no interest in his condition, the character references or the submissions on his behalf, and did not want to hear about evidence that he had not been involved in the confrontation or even near the area where the trouble began.  Verner reports that after being effectively detained just after 16.30, he was kept lying on the ground and beaten by Berkut officers for an hour and a half. The protocol recording his detention was, she says, only drawn up around 1 a.m.

The video footage is available here: http://youtube.com/watch?v=8SjOTg7fQQs  There is no evidence that Nuzhnenko is one of the men on the ground being beaten by officers.  On the other hand there is no evidence at all of his involvement in the disturbances, and it is disturbing that he and the 8 other people should have all received the most severe restraint measure available, being remanded in custody for 2 months.