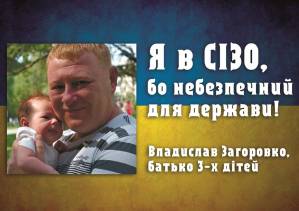 The words read: I am in SIZO [detention unit] because I’m a danger to society. Vladislav Zahorovko, father of three

38-year-old driver Vladislav Zahorovko [or Zagorovko] is married with three children, the youngest an infant.  He is the only breadwinner of the family.

His wife Svitlana explains that he went off to the demonstration on Dec 1, saying that he would soon return.  All contact was lost and she next saw him in court on Tuesday night, looking bruised and beaten.

Amnesty International in Ukraine reports that Zahorovko says he went to the demonstration to see historical events with his own eyes.  He was beaten by the riot police, receiving numerous injuries including to the retina and a rib fracture.  AI reports that he is being held in the SIZO [detention unit] and urgently requires an operation.

It points out that in the court on Dec 3, the prosecution was unable to provide any testimony from witnesses.

He was still remanded in custody for 2 months.