Release the Bankova Prisoners!Bankova Prisoners: Anyone will do?Berkut’s VictimsUnconcealed ProvocationOZON: On where the police were and weren’t on Dec 1No Provoking a State of EmergencyNotorious provocateur Korchynsky behind the Presidential Administration violenceBohoslavska points finger at Party of the Regions for provocationLenin between Berkut and ProvocateursDeliberate attempt to provoke disturbances?Court Ban vs President’s WordsIvano-Frankivsk EuroMaidan organizer brutally assaultedTernopil activist Volodymyr Khanas brutally beatenGrowing anger and pitiful attempts by Ukraine’s leaders to shift the blameNot Cowered: Lviv EuroMaidanPolice action incompatible with democracyBerkut violently breaks up EuroMaidanUS warns of consequences if EuroMaidan dispersedThugs attack Channel 5 film crew near pro-government rallyHromadskie.tv journalists beaten up in centre of Kyiv
• Рубрики / Кримінально-виконавча система
•
•
• 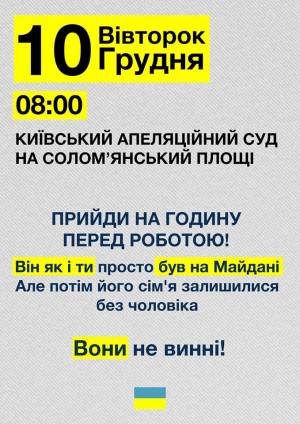 On Human Rights Day, Dec 10, the Kyiv Court of Appeal will be examining cases with direct significance for human rights and rule of law in Ukraine.  A search carried out the day before with serious procedural infringements only fuels concern.

Ten people, including 2 journalists, were last week remanded in custody for 2 months over the disturbances on Bankova St on Dec 1.

The first nine men, including journalist Valery Garagutz, were very badly beaten during the storm by Berkut riot police.  Amnesty International has reported that one, Yury Bolotov, urgently requires an operation, however most of the men need major medical treatment.

Neither this, nor the lack of any evidence against any of the men stopped judges at the Shevchenkivsky District Court from arresting them all for 2 months.  The rulings were suspiciously standard, despite clear differences in the men’s circumstances.  Most of the men have young children: Oleksandr Ostashchenko has a young daughter; both Yury Bolotov and Gennady Cherevko have two children, and Vladislav Zahorovko has three children, one a tiny infant, and he is the only breadwinner.  Valery Garagutz’ son is 17.

Ukrainska Pravda reports that a search was carried out on Monday at the home of another of the men, Yehor Previr who was at the demonstration together with his father and sister.  The police began the search without waiting for his lawyer to arrive.  They removed his computer and supposedly a blank application form for the organization “Bratstvo” and material from that organization.  This is Dmytro Korczynsky’s extreme rightwing organization which has taken part in many confrontations believed to have been deliberately aimed at provoking a police crackdown.  Korchynsky himself is known to have been at the scene of the trouble on Dec. 1.  The police have, however, shown great reluctance to suspect him of organizing the disturbances and not 2 journalists and 8 other men of different ages and occupations.  Monday, the day before the appeal, is the first time that suggestion has been made that any of the men have a connection with Bratstvo.

Previr’s father and sister say that the material was planted, and that it was not there the previous day.  At the time of the search and removal of these documents, the official witnesses were in the other room.   Previr is still in hospital under guard.  He sustained serious injuries on Dec 1.

The tenth person is another journalist from the civic initiative Road Control, Andriy Dzyndzya.   Like Garagutz, he and his colleagues are adamant that he was on Bankova St covering the events in his professional capacity.

The first hearing on Tuesday is with regard to Garagutz, beginning at 12.40.

Protesters will be gathering from 8.30 a.m. (meeting on Solomyanska Square).

The fact that two journalists stand accused of involvement in disturbances they appear to have been reporting, and the undisputed fact, corroborated by video footage, that the first nine men detained were badly beaten by the Berkut officers, make it very important that representatives of foreign embassies and missions in Ukraine, as well as the media are present at the court hearings on Tuesday.

There are more details about the events on Dec 1 in the appeal here which is open for endorsement   http://khpg.org/1386495468

Please see the texts below for information about the cases.

Bankova Prisoners: Anyone will do?