So what are Crimean anti-terrorist officers doing in central Kyiv? 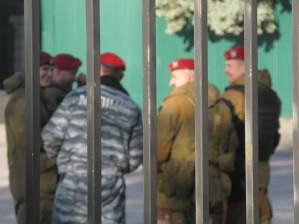 Oleh Martynenko from the OZON peaceful assembly monitors reports seeing four men in very specific uniform outside the Verkhovna Rada.  He says that they tried very hard to avoid being photographed, and his photos are not especially clear.  Some interior troop officers told him that the men are from the elite special force Interior Ministry unit Lavanda from the Crimea (Simferopol)

In order to be selected for Lavanda, you need to have mountaineering training, be proficient at hand combat fighting and using firearms.  Their tasks are to carry out anti-terrorist special operations; destroy illegal armed formations; detain a particularly dangerous criminal showing armed resistance; releasing hostages.  In conditions of armed conflict, the regiment can carry out reconnaissance-subversive or counter-subversive measures.

If the men had just dropped in, so to speak, they would not be fully uniformed. As reported, a considerable number of police officers have been brought into Kyiv, with selection appearing to be based on the men’s combat skills. The amounts in remuneration offered range from 800 to 1, 000 UAH per day, with five days required.

For more about why this strange recruitment during the present EuroMaidan protests, especially with the ruling Party of the Regions organizing their own pro-government rally, raises at very least questions, see: High-Price Pro-Government Provocation